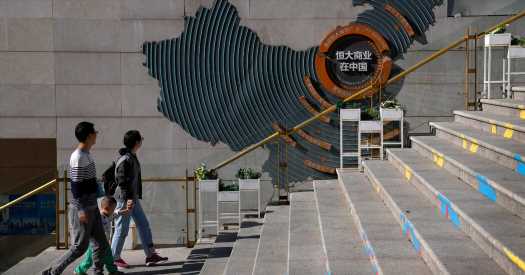 Shares of China Evergrande, the troubled real estate giant whose fate has contributed to jitters in global markets, fell again on Tuesday amid a new prediction that it would soon default.

The company’s chairman, Xu Jiayin, told employees in a letter quoted in Chinese media that Evergrande would surmount its problems, which include $300 billion in debt, plunging sales of apartments and a payment due Thursday.

“I firmly believe that Evergrande will walk out of its darkest moment and resume full-speed work and production,” he said in the letter, which was confirmed by a company spokesman.

But a dire forecast about the company’s fate arrived on Tuesday for investors in Asia, this one from S&P Global Ratings. “We believe Beijing would only be compelled to step in if there is a far-reaching contagion causing multiple major developers to fail and posing systemic risks to the economy,” said the report, which was dated Monday.

Both the company’s shares and its bonds fell on Tuesday, though by more modest amounts than in recent days and weeks. Its shares closed 0.4 percent lower, and shares of other Chinese-focused developers that tumbled on Monday recovered some of their losses. Hong Kong’s Hang Seng Index, which fell 3.3 percent on Monday, ended the day with a 0.5 percent gain.

The impact of an Evergrande collapse would depend in large part on the attitudes of China’s top leaders.

Many of Evergrande problems stem from new restrictions on home sales as Beijing tries to tame real estate prices and address rising concerns about the price of homes. The government has also sought to teach a lesson to developers who borrowed heavily in recent years to build more properties and finance their investments in other businesses. (In the case of Evergrande, those include interests that include electric cars and a soccer team.)

But a hard landing for Evergrande, should it default, carries risks. Unhappy home buyers and suppliers could cause unrest, while the financial impact on investors and others who might be exposed to Evergrande could be costly.

Beijing, however, has a number of ways to try to stop a financial disaster. The government controls the banks and the financial ties between them. It also firmly controls the flow of money across the country’s borders, allowing it to stem a potential rush of funds outside the country.

“The officials still have some tools at their disposal to calm down the panic,” said Zhiwu Chen, a professor of finance at the University of Hong Kong, who predicted the authorities would break up the company and sell its parts piecemeal.

The authorities also can control media coverage, while the police have considerable powers to detain anybody who raises a public fuss.

MyRepublic managing director Lawrence Chan: We want to be known as the service provider with heart