Home » Fact check: Biden was not the only world leader wearing mask during virtual climate summit 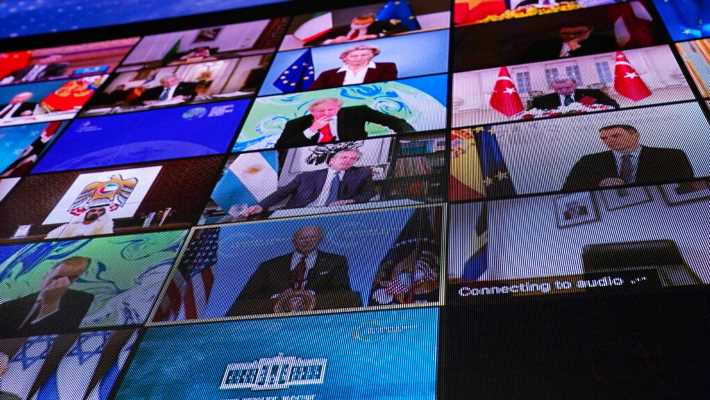 The claim: Joe Biden was the only leader wearing a mask at climate summit

As President Joe Biden’s two-day summit to address the global climate crisis came to an end, viral posts surfaced online claiming he was the only mask-wearer at the virtual event.

The White House’s climate summit, which was held via video due to the COVID-19 pandemic, took place on April 22 and 23, and dozens of leaders from around the world took part.

“There is one world leader who decided to mask up for a Zoom call,” reads an April 23 Facebook post by Young Americans for Liberty with almost 2,000 shares. “Take one guess. #ClimateSummit.”

Accompanying the text is a screengrab from the live-streamed event where Biden is seen wearing a mask alongside other world leaders on the call who are not.

A watermark on the top left corner of the image reveals it was captured from Ruptly TV, a video broadcasting agency rated as a questionable source by Media Bias/Fact Check.

Similar versions of the claim, such as one shared to Instagram on April 23 by Latinos with Trump, called Biden “an embarrassment” for being the only one to wear a mask “for a Zoom call.”

USA TODAY reached out to Young Americans for Liberty, Latinos with Trump and the Facebook pages for comment.

The claim made its way to several websites, including The U.S. Sun, Info Wars and Meaww, which added a correction to its article after being fact-checked by Snopes. Info Wars and The U.S. Sun did not respond to requests for comment.

The images included in the post are authentic but they only present a brief moment from the entire event, which had eight sessions that ran from 8 a.m. EDT to midday over the course of two days.

Additionally, the photos single out the screens of 15 to 20 participants, while more than 40 world leaders, 14 cabinet members, eight CEO’s and Pope Francis were in attendance.

Biden also was not alone in a room while wearing his mask, as some of the posts claim. He was joined by Vice President Kamala Harris, national climate adviser Gina McCarthy and White House climate envoy John Kerry, who was also pictured wearing a mask.

A review of additional photos and videos from the summit reveals Biden was not the only leader at the summit wearing a mask.

In another photo from Li Xiang for Xinhua News, Italian Prime Minister Mario Draghi, Suga and Biden are captured wearing masks on the first day of the summit.

It is also worth noting that Biden did not wear a mask during the entire summit; it was removed when he would address leaders at the event and when he was socially distanced from others.

A White House video of Biden at the summit shows him removing his mask and placing it on the podium before he starts delivering remarks. He is seen taking off his mask again at mark 1:41:59 in a livestream from Guardian News.

The claim that Biden was the only leader wearing a mask at the Leaders Summit on Climate is FALSE, based on our research. Images used to make the claim do not show all 40 screens of those who were in attendance. Additional photos from the event show other leaders wearing a mask as well. And video footage shows Biden removed his mask during different portions of the event.