Home » For Minneapolis protest leaders, no apologies over muscular demands for police reform 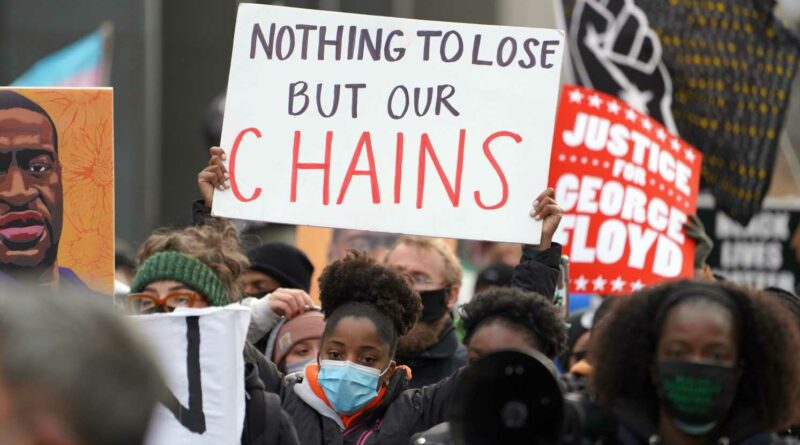 MINNEAPOLIS — The young Black man stood up in the back of the pickup, a megaphone to his mouth, surrounded by hundreds of chanting marchers who ignored the honks from drivers as they blocked the street.

“If George don’t get it?” activist Brandyn Tulloch, 24, yelled to the crowd.

“Shut it down!” they screamed as one.

Local organizer Brandyn Tulloch speaks to the crowd during a demonstration on April 19, 2021 in Minneapolis, Minnesota. The jury began deliberating today in the trial of Derek Chauvin, the former Minneapolis police officer charged in the killing of George Floyd while detaining him last May. Floyd's death sparked protests around the globe. (Photo: Brandon Bell, Getty Images)

The crowd roared approval at the idea that their movement would gridlock the city if jurors hearing the case against former police officer Derek Chauvin failed to convict him in Floyd’s death.

Tulloch and his friends in Minneapolis have emerged as some of the loudest, strongest voices for police reform in the city and nationally, but their confrontational methods and and reluctance to condemn rioting, looting and arson has put them at odds with more established reform groups.

While the violence associated with some Black Lives Matter protests has drawn condemnation from many area residents and some conservative commentators, Tulloch and other activists say they’re tired of waiting for the system to reform itself. They say the speed at which Chauvin was fired, tried and convicted, along with President Joe Biden’s support for the George Floyd Justice in Policing Act, show that protests can be effective.

They see themselves as the latest in the line of Black activists who cause “good trouble,” in the words of former Congressman John Lewis, who marched with Marin Luther King Jr. Lewis, a Freedom Rider, was beaten, arrested and imprisoned fighting for civil rights.

Said Lewis in 2016: “We have been too quiet for too long. There comes a time when you have to say something. You have to make a little noise. You have to move your feet. This is the time.”

Though last summer’s nationwide protests drew the ire of then-President Donald Trump, who said cities were “going to hell” due to violence. But most of the actions were peaceful, albeit inconvenient for drivers and residents.

Demonstrators did not engage in violence or destructive activity in more than 93% of the more than 7,750 demonstrations nationwide between May 26 and late August, according to a report by the U.S. Crisis Monitor, a joint effort including Princeton University that collects and analyzes real-time data on demonstrations and political violence in the U.S.

But in Minneapolis, city leaders were stung by the riots and destruction following Floyd’s death. Although the damage was mostly localized — including the looting of a Target and the arson destruction of a Walgreens — city leaders say it had a devastating effect on small businesses in those areas, few of which have since reopened. In response, during the Chauvin trial they ringed the courthouse with the Minnesota National Guard and razor wire-topped fences. Estimates put the damage caused by last summer’s protests and riots in the Minneapolis area at $500 million.

Mayah Varnado, 22, holds a sign during a march in downtown Minneapolis as jurors begin deliberating in the trial of former police officer Derek Chauvin, who faces murder charges in the death of George Floyd. (Photo: Trevor Hughes-USA TODAY NETWORK)

None of those security measures were needed after the verdict, and the barricades are now being dismantled. But protest leaders remain angry; they believe government officials are more willing to spend money on fences and police than on changing how police treat people of color.

But they also say Chauvin’s convictions on all three counts — along with the decision of Minneapolis police Chief Medaria Arradondo to fire the four officers connected to Floyd’s death and testify against Chauvin — suggests they’ve pushed the city past the tipping point. Arradondo fired the four officers the day after Floyd’s death, and after several days of protests, Chauvin was arrested.

Protests continued, and Minnesota Attorney General Keith Ellison, who is Black, took over the case, and brought tougher charges against Chauvin than originally laid by local prosecutors, along with charging the three other officers. Those former officers go on trial later this summer.

The head of the 112-year-old NAACP, Derrick Johnson, said the community outcry over Floyd’s death may be the policing-reform movement’s equivalent of the civil rights breakthrough in Selma, Alabama, following “Bloody Sunday” in 1965.

Another protest leader, Jaylani Hussain, said before the verdict that he was prepared for a protracted and personal battle on the front lines of public dissent.

“Either we go home after getting a guilty verdict or we stay in the streets until we get justice by any means necessary,” he said.

He asked, what’s the value of property — usually insured — when measured against the Black lives lost to systemic racism?

Long-time reform advocates, from the Rev. Jesse Jackson and the Rev. Al Sharpton to local leaders like Trahern Pollard, say working within the existing system will ultimately be more effective. In the hours before the Chauvin verdict was announced, Pollard pleaded with Black activists in Minneapolis to avoid violence and looting.

“At the end of the day, you’re not going to make no changes by burning and breaking into people’s businesses. That’s not how you accomplish anything,” said Pollard, speaking at a memorial for Daunte Wright, a Black man killed by police in the Minneapolis suburb of Brooklyn Park amidst the Chauvin trial.

Protests or riots?: As protests continue over police killings, lawmakers try to add to the list of crimes protesters could face

Pollard, 48, runs “We Push For Peace,” a longtime community-based anti-violence program in the Twin Cities. For 15 years, he’s been trying to reduce violence in Black communities while simultaneously improving relationships with police and elected officials. Pollard said young activists expect the world to change immediately: “They want everything right now, not understanding that everything is a process in life.”

The Rev. Ian Bethel, who has been working to change the police department for more than a decade, said he understands the anxiety and stress within the Black community.

But speaking to protesters before the verdict was announced, Bethel pleaded for peace. Bethel worked alongside Arrandando from 2003-2008 when both were members of the Police Community Relations Council, created at the urging of the U.S. Department of Justice, which was concerned city police were using too much force against communities of color.

Bethel, the senior pastor at the New Beginnings Baptist Tabernacle in Minneapolis, said violence by protesters would simply escalate the response from police, although he acknowledged “we don’t much like” the rubber bullets and tear gas they use, and that the system still often favors white people over Black.

“Don’t you hurt what we’re doing at the table,” Bethel urged young Black protesters. “Please. Stop this violence. Don’t tear up our city any longer.”

The federal Justice Department this week opened a new investigation into the Minneapolis Police Department’s pattern and practice of policing, including violence used against protesters and racial bias.

Stepping back from Minneapolis, police-reform advocate and Color Of Change President Rashad Robinson, 41, said there’s room for all approaches. He said it would be a mistake to see last summer’s sometimes-violent protests as disconnected from generations of pressure from Black leaders. Color of Change is an online-focused reform group with more than 7 million members.

“The protests had a deep impact on the cultural conversation, but they’re a direct result of years of growing outrage,” he said. “All of these things are deeply connected.”

Trahern Crews, the co-founder of Black Lives Matter Minnesota, said he believes the direct pressure on Minneapolis and other cities has been effective, but he also honors the work of those who came before him.

“I think we are standing on the shoulders of the civil rights movement and we have to take it to the next level ’cause our existence is at stake socially politically and economically. We don’t have a choice but to fight or die,” he said. “I don’t want to compare or make it a competition but I am proud that we were able to apply pressure on the cities of Minneapolis and Brooklyn Center to get the officers involved in the murder of Daunte Wright and George Floyd arrested and charged which is close to unheard of.”

Tulloch said he and other protest leaders will keep pushing, recognizing that their efforts might make some people feel uncomfortable.

On April 12, following Wright’s death, Tulloch tweeted: “If you feel the urge to say ANYTHING negative about the protest, unrest, or alleged looting in Brooklyn Center or MPLS, keep that s___ to yourself. THEY’RE STILL KILLING BLACK FOLKS. Don’t say S___ unless you are condemning the senseless murder of yet another black body.”

PSA: If you feel the urge to say ANYTHING negative about the protest, unrest, or alleged looting in Brooklyn Center or MPLS, keep that shit to yourself.
THEY’RE STILL KILLING BLACK FOLKS.
Don’t say SHIT unless you are condemning the senseless murder of yet another black body

After the verdict, Tulloch said he remains committed to the movement. He said it’s not his place to criticize how another Black person wants to fight for reform, but he’s going to keep doing what seems to be working.

“Now, is it naive of me to believe that I will see the change I want to see in my lifetime? Yes. But maybe it means my kids will see we have moved ahead,” he said. “I am no longer sorry. I am unapologetic.”

Trahern Pollard of We Push for Peace, a community-based anti-violence group, escorts the Rev. Al Sharpton into the memorial viewing of Daunte Wright in Minneapolis. Wright was shot and killed by police in nearby Brooklyn Center, and the viewing was held the day after a jury convicted former Minneapolis police Officer Derek Chauvin in the murder of George Floyd. (Photo: Trevor Hughes-USA TODAY NETWORK) 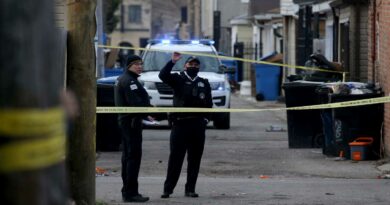 Confused between old and new tax regimes? Read this