Home » Business » How far can you go with lab-made food substitutes? This reporter found out. 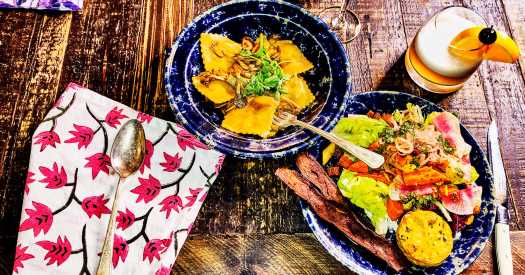 A slew of venture-backed companies envision a world where we sit down for dinner and brag that no animals were harmed in the production of this carbon-neutral porterhouse steak. They want to Impossible Burger our entire diet.

It’s beginning to work. Consumer sales of the increasingly impressive simulacra of meat, eggs and dairy products grew 24 percent from 2015 to 2020, according to the market research company NPD Group — and 89 percent of those buyers are not vegetarians.

Joel Stein wanted to see just how realistic the lab-to-table future could be, so he threw a dinner party filled with bleeding-edge products that don’t bleed. The carefully chosen guest list consisted of his wife and their 11-year-old son.

A whiskey sour served on a coaster made of soft fake leather produced from mycelium, which was grown on a bed of sawdust and mixed with cornstalks. Beta-lactoglobulin, the main protein in whey from cow’s milk, from Perfect Day Foods replaced the egg whites for the foam on top of the drink. The whiskey was from Endless West, a company in San Francisco producing spirits without grains or barrels.

A salad of gem lettuce, roasted carrots and watermelon radishes. It was served over a smear of fake labneh and surrounded with bits of Prime Roots’ fake bacon, which is made from a mycelium called kogi, and was topped with potato-and-dill “egg bites” from Just Egg made out of mung bean protein and canola oil.

Ravioli stuffed with mushrooms and cream cheese made from beta-lactoglobulin and coconut oil, paired with a glass of sake that was made without any rice.

For dessert, a freezer full of ice cream made from Perfect Day’s protein. Late last year, Graeter’s, the 150-year-old Cincinnati ice cream institution, introduced six flavors for its Perfect Indulgence vegan line. “I like it,” Mr. Stein’s son said, and then added, “It tastes like slightly worse ice cream than normal.”

Up to 30% of Americans may be infected with coronavirus by year-end, Dr. Scott Gottlieb says