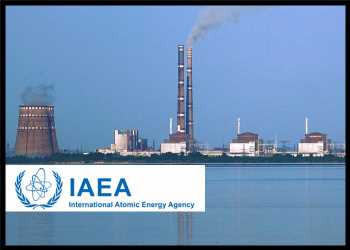 The International Atomic Energy Agency (IAEA) on Tuesday will release a report about the nuclear safety and security situation in Ukraine.

The report will also include the UN nuclear agency’s findings from the just concluded mission to the Zaporizhzhya Nuclear Power Plant, which has constantly been under attack by Russian forces.

A 14-member IAEA delegation, headed by Grossi, arrived at Zaporizhzhia on September 1 for essential nuclear safety, security and safeguards work. All but two experts have left the plant. The experts are staying to maintain a continuing IAEA presence at the site, enabling the agency to observe the situation there and provide independent assessments.

The IAEA said in a statement that Ukrainian authorities informed it that a back-up power line between the power plant and a nearby thermal power station was deliberately disconnected Monday to extinguish a fire, but the line itself was not damaged. The ZNPP continues to receive the electricity it needs for safety from its sole operating reactor.

After the plant’s connection to its last remaining operational 750 kV line was lost late on Friday, the 330 kV reserve line had been used to deliver electricity to the grid. Ukraine informed the IAEA that this back-up line will be re-connected once the fire has been extinguished.

One of the plant’s six reactors continues to produce the electricity the plant requires for cooling and other nuclear safety functions. The reactor will be connected to the grid when the 330 kV line is switched on again.

The Zaporizhzhya Nuclear Power Plant, which is Europe’s largest nuclear facility, has been controlled by Russian forces since early March, but the Ukrainian staff is continuing to operate the plant.

The IAEA experts on the ground have been assessing the physical damage at the ZNPP, determining the functionality of the main and back-up nuclear safety and security systems and evaluating the staff’s working conditions as well as the plant’s current emergency response capacities. Over the past few days, safeguards inspectors have also performed urgent safeguards activities on the site.

The plant’s Ukrainian staff told the IAEA experts that they plan to repair the 750 kV line that went down on Friday but that it would take several days to do so.

A secure off-site power supply from the grid and back-up power supply systems are essential for ensuring nuclear safety. This requirement is among the seven indispensable nuclear safety and security pillars that the Director General outlined at the beginning of the conflict.

Over the past month, there have been numerous shelling incidents at or near the ZNPP, causing damage at the facility and raising widespread concern about the risk of a severe nuclear accident. Shelling at the ZNPP on September 1 damaged an oil tank containing turbine lubrication oil, and there was renewed shelling on Monday.