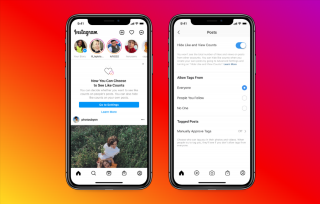 Instagram’s test to hide public like counts is opening up: Now everyone on the photo- and video-sharing network can choose to hide likes, and soon so will anyone on the parent company’s network, Facebook. The company announced the news on Wednesday, alongside an interface change that puts “Drops” at the top of the Shop tab.

The ability to hide likes may have its share of haters, as well as fans, but that hasn’t stopped the company from expanding the feature to more people. Starting Wednesday, Instagrammers can hide likes on all posts in their feeds, including public-facing like counts on their own posts or those of others. The control is available in the new “Posts” section in settings. The option also pops up when creating a post, and can be changed after it goes live. Facebook will get these controls over the next few weeks.

Framed as a way to give people more control, Instagram said it worked closely with third-party experts and now expands the feature to more people, “so they can decide what works for them,” the company said in a blog post.

And to clear up any confusion, the company emphasized that likes aren’t being removed — simply hidden — so it won’t affect Instagram’s algorithms or the insights it provides to brands and creators.

In a press roundtable on Monday alongside creators, Carolyn Merrell, Instagram’s head of global policy programs, said, “People still have the ability to like [posts] — we’re not taking that feature away — they can still like the content and you can still have all of that information on the back end. It’s just that visibility.”

Social media has been a lightning rod for criticism by behavioral psychologists and others concerned about its negative impact on users. Multiple studies have pointed to a strong connection between the heavy use of social media and heightened risks for depression, anxiety, loneliness, self-harm and suicidal thoughts.

These concerns weren’t lost on Instagram, which began testing features to hide likes at least as far back as 2019 “to see if it might depressurize people’s experience on Instagram,” it wrote.

At the time, broadcast and print reporters pressed the company about the move. CBS’ Gayle King questioned whether Adam Mosseri, head of Instagram, was worried that such a feature would hurt the business. “A little,” he admitted. “[But] we don’t want Instagram to be such a competition. We want it to be a place where people spend more of their energy connecting with the people that they love and the things that they care about.”

Cue the backlash, because of course. Some people live for likes, while others see them as essential to gauge what’s trending or popular, and don’t appreciate the thought of having them taken away.

Cardi B reacted by posting that it wasn’t the likes, but the comments that are harmful, while Nicki Minaj benched herself in protest.

But others seem more receptive. During the roundtable, visual artist, musician and rapper Melisa Rincón, aka Bunny Michael, applauded the feature: “You’re just becoming more mindful in general when you’re on the app or any app on the internet, which I think is just so important, especially now since this is basically the world now. It’s a digital reality, and we’re basically, like, avatars that are on display 24 hours a day, vulnerable to any criticism, especially self-criticism.

“Because this is all happening so fast, and so exponentially, we haven’t had a moment to catch up and build up our awareness behind it. So I think this is a good step toward us really understanding, OK, what is the world that I want to create for myself and curate for myself online, because I have the choice,” Michael explained.

Schuyler Bailar, the first openly transgender NCAA Division I swimmer, has already seen people “who throw a fit” and can’t deal with it, he told the group, but he also notes plenty of support for hiding likes. “With both ways, I think, they’re going to make a big deal out of it. Hopefully, they’ll be a minority,” he said.

The feature, which technically still seems to be in testing mode, joins a crop of content management tools, like shutting down comments. People can also filter offensive content from their direct messages and control what they see and share on Facebook’s News Feed, with the Feed Filter Bar, Favorites Feed and Choose Who Can Comment features.

Instagram collaborated with Michael and Bailar, as well as The Jed Foundation, on a new Instagram guide that offers advice on managing pressure online. It’s also funding research into people’s experiences on the platform, to help drive productive changes to its policies and products that support the community, and is requesting research proposals from academics and nonprofits worldwide.

In other Insta news, the company created a “Drops” destination, so people can find and shop product drops more easily.

Drops, which will live in the top spot on the Shop tab, will also let fans of a particular brand or designer sign up for reminders, peek at upcoming drops and peruse products that recently launched on Instagram.

A dedicated Drops section will become part of the Shop tab. Courtesy image

All items are shoppable, according to the company, with checkout handled directly in the Instagram app. It also pointed to a few featured drops, including the Drake x NOCTA “Cardinal Stock” collection drop at @officialnocta — for a curated release that includes hoodies, T-shirts, caps and fleece pants — tomorrow’s Wren + Glory hand-painted summer collection at @wrenandglory and the Charlotte Tilbury Exclusive Pillow Talk Lips & Dreams Lashes Kit, which drops Saturday at @ctilburymakeup.