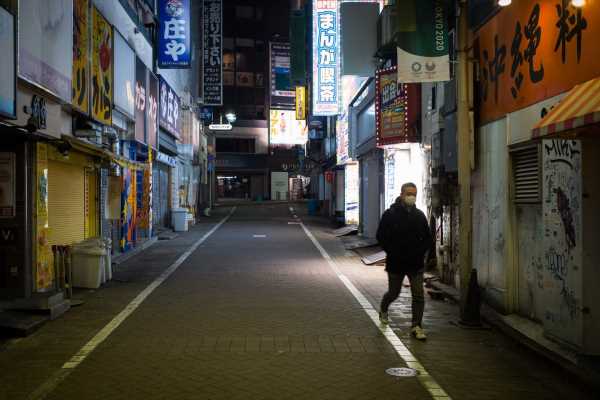 Japanese ministers pleaded for people to restrict their movements during the daytime, with the country set to expand the area under the coronavirus state of emergency beyond the Tokyo area.

Prime Minister Yoshihide Suga said he was considering a request from three prefectures in the Kansai region in western Japan to declare a state of emergency. Several other regions have either asked for an emergency or are considering doing so. Together with Tokyo and three nearby prefectures, that represents more than half the nation’s economy.

Although the emergency is intended to send a strong message in a country that can’t legally enforce the type of lockdowns seen in other nations, the move is yet to have the same level of impact on people’s behavior seen during the first declaration last spring.

“The number of people moving about has not gone down,” Yasutoshi Nishimura, the minister in charge of Japan’s virus response, wrote on Twitter Monday evening, the last day of a long weekend in the country. “Please refrain from going out not just during the night, but at daytime also.”

While the number of people moving through central business and shopping districts since the emergency was declared was down considerably from a typical year, the decline this time is much less than that seen in April during the first state of emergency, according to an analysis of GPS data provided by Agoop.

Tokyo reported cases under 1,000 for the first time in more than a week on Tuesday, with 970 new infections, although testing and reporting are likely to have been impacted by the long weekend. Serious cases in the capital, defined as those on a ventilator or ECMO machine, jumped to a record 144, with 250 beds allocated to such cases.

The three largest prefectures in the Kansai region — Osaka, Hyogo and Kyoto — could be formally added to the emergency as early as Wednesday, Kyodoreported. The area has a combined population of around 17 million people. Two other prefectures, Toyota’s industrial homeland of Aichi and its neighbor Gifu, could also be included.

With the addition of five prefectures, the emergency areas would cover Japan’s three largest economic hubs accounting for about 55% of the economy’s total output, according to government data.

An emergency in this wider area lasting for two months would slice 1.5% off real GDP, according to economists Yoshimasa Maruyama and Koya Miyamae at SMBC Nikko Securities Inc. They now expect the economy to contract at an annualized 3.3% in the first quarter of this year.

The surge is already weighing on sentiment. The mood among main street merchants and other consumer-facing businesses like store owners and taxi drivers slid in December to the lowest since May, a government survey showed Tuesday.

Critics havequestioned if the second state of emergency is sweeping enough to contain the spread of the virus. While authorities have called for lighter restrictions than last year to limit the economic damage, the measures risk sending mixed messages to a public that is struggling with pandemic fatigue. Department stores, cinemas and gyms remain open, while bars and restaurants have only been asked to close after 8 p.m.

Health Minister Norihisa Tamura addressed the issue on Tuesday. “Of course it’s not OK for people to drink and get rowdy during the daytime,” Tamura said at a regular briefing. “We want to people to use their common sense.”