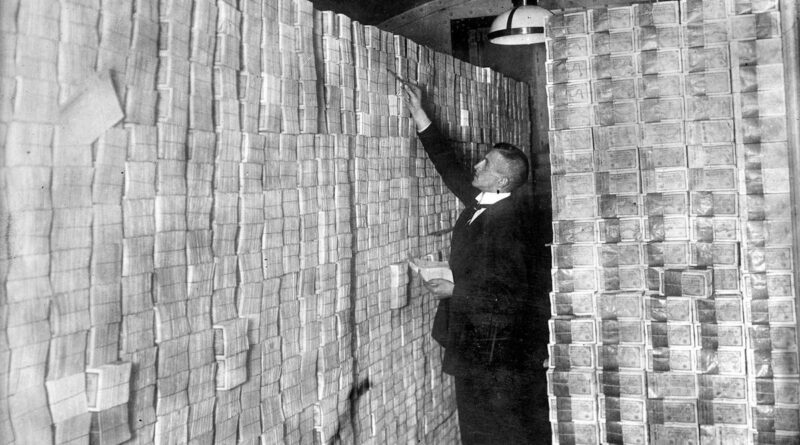 Hyperinflation certainly would change everything. But it absolutely isn’t happening. Not by a long shot.

It was a weird thing to say.

But then Dorsey is a tech billionaire. Tech billionaires seem to be competing for some sort of “Howard Hughes memorial weirdness trophy” right now.

I don’t want to be accused of “punching-down” by picking on Dorsey.

He’s only worth about $15 billion.

Literal space cadet Elon Musk is worth a quarter of a trillion US dollars now and tweets weirder stuff every day.

Meanwhile, Facebook’s Mark Zuckerberg wins this week’s round of “Barmy Billionaire” for changing the name of his company to Meta on Friday.

Of course, the name had to have a ring of dystopian science-fiction about it.

Meta reflects a new philosophy Zuckerberg has dreamed up.

Apparently, it’s about a deeper level of internet connection that will be even more uplifting and positive for the world than regular social media has been so far.

That’s why – even though Musk might be the first to get to Mars – I’ve got my money on Zuckerberg in the race to accidentally build sentient computers who decide to exterminate humans.

But, back to Dorsey and his hyper-hyperbole.

What’s bugging him about inflation? I’m guessing it won’t be the price of a cup of coffee.

Was he just hyperactive? Hyperventilating?

Hyperinflation is a specific economic term for the complete meltdown of a monetary system.

It relates to prices increasing at rates like 1000 per cent a year.

Or 50 per cent every month, or some other insanely unsustainable number.

It’s what happened in Germany in the 1920s. The price of a loaf of bread went from 250 marks in January 1923 to 200 trillion in November. People burned banknotes to keep warm.

Prominent US economics Professor Steve Hanke tweeted: “There have been 62 certified hyperinflations in world history. At present, no country is experiencing hyperinflation. @Jack should know better than to tweet irresponsible public statements.”

Sadly, it wasn’t to be one of the great public intellectual debates.

Dorsey responded with the “laughing so much I’m crying” emoji.

Ironically, Hanke is an inflation hawk. He’s a former member of the Ronald Reagan administration that battled inflation in the 1980s.

He’s not in the “transitory”camp which believes it’s all short-term pandemic-related stuff.

He knows how bad inflation can be for an economy.

In New Zealand and the US and many other developed economies right now, inflation has spiked to around 5 per cent a year.

It’s the first time that’s happened in more than a decade and it is cause for concern.

We don’t want it to become embedded, doing the kind of economic damage it did in the 1970s and 1980s.

It made us a poorer nation, eroded our purchasing power, undermined confidence and drove up the cost of borrowing.

Beating it into submission was something of a national triumph.

We led the world with new central bank inflation targeting policies that were adopted widely around the globe.

It came at a cost, mortgage rates soared, investment was stifled, growth stalled and unemployment rose into double digits.

There’s a case to be made that New Zealand went at inflation too hard, we let unemployment run too high and did damage to parts of society that we’re still paying for.

With the benefit of hindsight, we can see that inflation subsided around the world from the late 1990s as computers drove productivity in the supply chain and internet competition drove prices down.

In fact, we’ve spent much of the past decade worrying about deflation and contemplating strange things like negative interest rates.

So the return of inflation really does change the dynamic of the global economy.

It means facing the first cycle of interest rate rises in more than a decade.

That could mean a reckoning on the world’s crazy levels of debt.

It could mean a crash, crunch or correction for asset bubbles, overvalued stock and property markets.

Ironically Dorsey’s tweet would have carried more weight if it just said: “Inflation is going to change everything. It’s happening.”

I don’t want to be hypercritical, but the tweet suggests he isn’t great at economics.

But that doesn’t really ring true.

I think he just wanted to cause a stir.

But for the rest of us, struggling with the grocery bill or rising mortgage payments, ordinary old inflation is enough to deal with.

For what it’s worth, I suspect we’ll be living with higher inflation for a year or two. But I think it will be transitory.

The big questions are: how long is transitory? And how much damage will inflation do on the way through?

Even though it seems to be taking forever, the pandemic supply shock – shipping woes and production backlogs – will play through and there will be deflationary pressure out the other side.

I think that because – despite all their silliness – I believe the tech guys will win in the end.

Technology might make the world scary and weird but it always makes things cheaper.

U.S. Stocks Soar On Much Better Than Expected Jobs Data