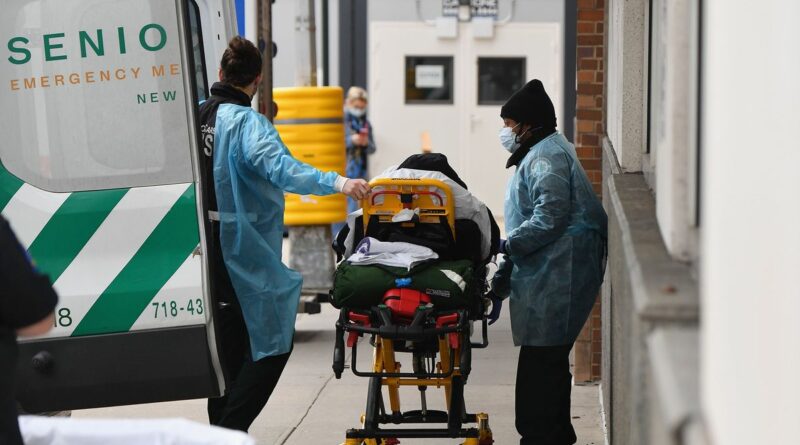 Connecticut, Texas and Pennsylvania reported their first cases of the virus variant that helped trigger a U.K. lockdown amid concern that Covid-19 deaths in the U.S. are likely to maintain a near-record pace at least through January. China reported 33 new cases in Hebei, site of anoutbreak near Beijing.

British medics will be able to give Covid-19 shots to hundreds of thousands of people every day by Jan. 15, U.K. Prime Minister Boris Johnsonsaid. Brazil surpassed 200,000 virus deaths, second only to the U.S., on a day when it reported the most infections of the pandemic.

Subscribe to adaily update on the virus fromBloomberg’s Prognosis teamhere. Click CVID on the terminal for global data on coronavirus cases and deaths.

China reported 37 local confirmed coronavirus infections, including 33 in the northern province of Hebei near Beijing.

A city of 11 million people near China’s capitalhas been locked down after the emergence of more than 200 cases, the worst outbreak in about two months in the country that has largely contained Covid-19.

All passengers arriving in the U.K.will be required to prove they do not have coronavirus, showing a negative test result taken within 72 hours of the start of their journey.

Under new rules announced by the British government, anyone failing to produce the evidence of a negative test will be hit with an immediate fine of 500 pounds ($678). Travelers arriving from countries that are not on the government’s open travel corridor list will be required to isolate at home for 10 days, regardless of their test results.

The leaders of California, Illinois, Kansas, Michigan, Minnesota, Washington and Wisconsin called on federal officials to release more doses held by the government to states.

“The failure to distribute these doses to states who request them is unconscionable and unacceptable,” the governors said in a letter dated Jan. 8.

New York Governor Andrew Cuomowarned hospitals and health-care workers on Thursday that if they don’t take Covid-19 vaccines while it’s offered exclusively to them in the early days of the state’s inoculation drive, they will lose their priority status when the vaccine rolls out to the general public.

Cuomo said that’s why he is pushing back on requests by New York City and other local officials who’ve asked the state to expand the group of people eligible for the vaccine in a bid to speed up vaccinations in the state. New York has administered only 430,000 of the 900,000 doses it has received.

Australia’s Queensland state imposed a three-day lockdown of its capital, Brisbane, after the U.K. variant of the coronavirus was detected in the city.

Residents across the metropolitan area will have to stay home except for essential work, services and exercise and wear masks if they do go out, state Premier Annastacia Pałaszczuk told reporters Friday.

Brazil’s coronavirus death tollpassed 200,000 as the respiratory disease again pummels the Latin American country and a nationwide vaccination plan remains weeks away at best. Another 1,524 people died, while new cases rose to a daily record of 87,843.

Much like in Europe and the U.S., the virus has resurfaced across the sprawling country in the past few weeks. Year-end festivities which saw large gatherings, and the detection of the new, more contagious variant of the virus in Sao Paulo, have added to concerns about the strength of a second wave.

France will keep gyms, theaters and ski lifts closed until at least the end of January, and bars and restaurants until mid-February, Prime Minister Jean Castex said. New infections rose by 21,703 on Thursday while deaths increased by 276 to 66,841. Curfew measures will remain in place across France until at least Jan. 20, Castex said.

The country said it has found 19 confirmed cases of the more-transmissible U.K. Covid-19 variant and 3 cases of the South African variant. Health authorities are investigating two probable clusters of infection with the U.K. variant in the western region of Brittany and the Paris region. Authorities found a confirmed case of the U.K. variant in Paris region that they haven’t been able to link to any travel history.

Hospitalizations in New Jersey for Covid-19 dipped slightly to 3,711 on Thursday, while those in New York also fell slightly to 8,548. At the height of the first wave of the pandemic, New York had more than 18,000 hospitalized at one time.

Still, New York City’s Covid-19 hospitalizations rose to their highest rate since May at 3,107 as of Jan. 5, according to state data. Hospitals admitted 273 people on Tuesday, and the rate of admissions has climbed to 4.28 per 100,000 residents, well above the city’s goal of keeping that rate below 2 per 100,000.

California reported 583 new deaths, just two fewer than the record set at the end of the year, raising the toll to 28,045 since the Covid-19 pandemic began. The state added 36,385 new cases, bringing the total to 2.5 million.

The Golden State has been a focal point of the latest outbreak as a growing number of regions across the state, particularly in Southern California, run out of ICU beds. Statewide, the number of ICU beds have fallen to the lowest level based on data going back to early April, as hospitalizations climb to the highest during that time.

Replying to @GovNedLamontAs we said last week, given the speed of this new strand of the virus and its identification in several states throughout the country, we presumed it was already in our state and this info this morning confirms that fact. (6/8)7:59 PM · Jan 7, 2021

Spain’s total cases rose by 6,498 to surpass 2 million, according to the Health Ministry on Thursday. The total number of fatalities reached 51,675. The country will start receiving 600,000 doses of Moderna Inc.’s Covid-19 vaccine in the coming days, Health Minister Salvador Illa said.

On Thursday, the state reported 8,757 cases and 177 deaths. That pushed the total to 1,008,045 confirmed and probable cases, and 17,272 deaths since the start of the pandemic, according to the Illinois Department of Public Health.

Texas and Pennsylvania became the latest states to report cases of the more-transmissible variant of the coronavirus.

In Texas, the variant was detected in an adult man from Harris County, home to the country’s fourth largest city of Houston, who has no history of travel, according to the Texas Department of State Health Services.

“The fact that this person had no travel history suggests this variant is already circulating in Texas,” said Dr. John Hellerstedt, DSHS commissioner.

In Pennsylvania, a person in Dauphin County tested positive after “known international exposure,” Secretary of Health Rachel Levinesaid. The person had mild symptoms that were resolved while isolated at home.

At least five other U.S. states have reported cases of the variant.

British medics will be able to give Covid-19 shots to hundreds of thousands of people everyday by Jan. 15, Prime Minister Boris Johnsonsaid.

“We are in a race against time, but we are doing everything we can to vaccinate as many people as possible across the U.K.,” Johnson said at a televised press conference.

Italy registered 18,020 new virus cases on Thursday, from 20,331 the day before. Daily deaths declined too, with 414 fatalities reported, compared with 548 on Wednesday, while the positivity rate rose to 14.9% as fewer tests were carried out.

Italy has extended through mid-January some curbs imposed during the holiday season, including a limit of two guests per household.

A pair of arthritis medicines, including Roche Holding AG’s Actemra,reduced mortality and shortened recovery times in intensive care for Covid-19 patients in a study, opening the possibility for another treatment option for the severely ill.

Some 27% of critically ill patients who got the arthritis drugs in the study died in the hospital, compared with about 36% of those who didn’t get the drugs, an Imperial College London research team said.

Conflicting and incomplete information from Sinovac’s trials last month created confusion over how effective the shot is. Researchers in Brazil delayed releasing complete data on the so-called CoronaVac shot in late December, saying only that it was found to be more than 50% effective.

The release of more definitive data was delayed because the company needed to reconcile results from different trials using varying protocols, according to a person familiar with the matter.

The new coronavirus strain identified in South Africa appears to bemore transmissible than earlier variants and has accelerated the onset of a second wave of infections, according to a scientist advising the country’s health minister.

Yet there’s no evidence that it causes a more severe or different form of the disease, and hospitalization and mortality rates as a proportion of the number of infections are lower than during the first wave in July and August, said Ian Sanne, an infectious diseases doctor and head of Right to Care, a non-profit that provides treatment to people with HIV and associated diseases.