Home » Pink talks new documentary, advice for younger self: ‘I wouldn’t tell her anything. She’d kick me in the shin.’ 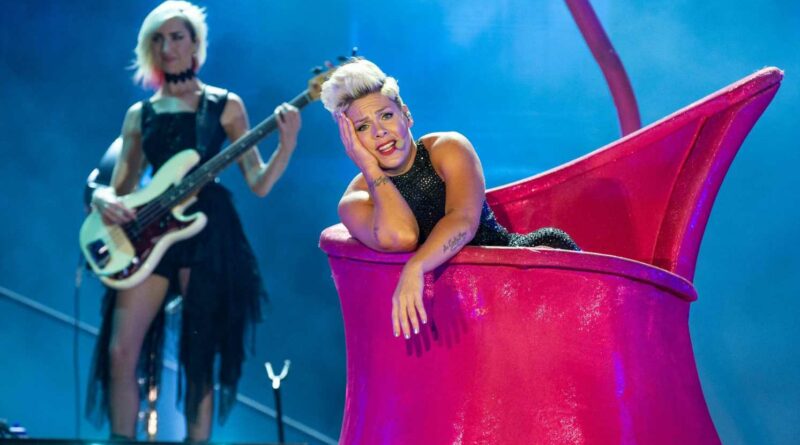 Like the rest of us, Pink has a lot of pent-up energy after a year cooped up at home.

The pop star, who contracted COVID-19 last March, used her time in lockdown to teach herself GarageBand, work out “like a crazy person” and of course, create.

“Making music, making baby blankets, making bread,” says Pink, 41, a self-professed sourdough fiend. “I even care about where my flour comes from – that’s how deep in it I am.”

She’s also readied a new documentary, “Pink: All I Know So Far,” streaming Friday on Amazon Prime. The concert film follows the “So What” hitmaker on the European leg of her Beautiful Trauma World Tour in 2019, juggling performing and parenting her two kids – Willow, 9, and Jameson, 4 – with husband Carey Hart. On Sunday, she’ll be honored with the Icon award at this year’s Billboard Music Awards.

Question: I imagine the nostalgia was very real watching this documentary.

Pink: It’s been two years in the making, so watching it back last week with my mom, I was like, “I miss live music so much. It doesn’t even have to be my show, I just want to go to a show.”

Q: I couldn’t help but feel exhausted for you, too. Jameson is so cute, but such a ball of energy.

Pink: He’s so delicious. He’s such a little romantic, too. I don’t know, I must’ve saved lives in my last life because I hit the kid lottery in this one.

Q: I also loved the moment where you held a meeting with your team and each person had a bottle of wine.

Pink: That’s the only way you can have a meeting, especially these days post-pandemmy. Everyone gets a wine bottle. I’m a board member now – on PTA, official – and I totally pour beers in mugs and act like I’m drinking tea. Does that mean I have a problem?

Q: How has it been being with your family 24/7 this past year?

Pink: It’s mostly great. (Laughs.) No, it’s beautiful. My son would have started preschool, but I got an extra year with him, so for that I feel so lucky. And they drive each other crazy – they drive me crazy. I can only imagine what it’s like for them living with me. I almost feel bad for them to have to be around me all the time.

Q: If I’m correct, you and Willow’s go-to movie has been “Mamma Mia! Here We Go Again.”

Pink: One-hundred percent. She’s actually trying out for the play this summer. There’s an art camp that’s doing “Mamma Mia!” so it’s all paying off.

Q: Who does she want to play?

Pink: Sophie, of course. I was like, “But if you weren’t Sophie, who else would you be?” It’s your first play! I think I was Tree No. 3. (Laughs.) No, I was actually just chorus for the first 16 plays and you gotta be good with that. You gotta start at the bottom.

Q: Cher recently tweeted that you “make magic” when you sing (and also appeared in Pink’s “All I Know So Far” music video). You need to hit her up for “Mamma Mia 3.”

Q: There’ve been talks about it!

Pink: Oh, I hope so. There’s no one cooler than Cher. When Cher shows up in “Mamma Mia 2,” I’m like, “(Expletive) that, no one’s cooler.” She’s always been the coolest and she knows it.

Q: Have you and Carey gotten vaccinated yet?

Pink: Hell yeah. I would have had all three (vaccines) in each limb. Give it to me, I don’t care. I want to go out.

Q: What’s the first thing you did once you felt safe to go back into the world?

Q: So what sparked the idea for this new song, “All I Know So Far?”

Pink: I have this documentary and it’s the story of my life, kind of, and I have to write the story of my life in 3½ minutes for a song. I’m obsessed with “The Greatest Showman,” I love “La La Land,” I’m a total theater nerd. And I’m like, who better than (composers) Benj (Pasek) and Justin (Paul)? So I called them up and we wrote a song on Zoom.

All the lines are basically quotes pulled from the documentary, and the chorus is something my dad always told me when I was a little girl: “Throw your head back and spit in the wind.” It ended up being a letter to Willow. If I were to go away tomorrow, what would I leave behind?

Q: Willow has really come into her own as a singer between “A Million Dreams,””Cover Me in Sunshine” and the Disney holiday special.

Pink: That Disney special gutted me. I was not prepared for what came out of her mouth – she’s never had a singing lesson in her life. (But) it’s not her dream. She wants to go to the Culinary Institute of America and become a baker in New York, and then have an amusement park and possibly a water park. She’s been sending me Zillow listings of condos near Disneyland. She’s off on a whole ‘nother thing, but the thing that’s so interesting about her is she’s just an odd bird. She does whatever she likes, but she doesn’t take anything too seriously.

She wants to swim in the river and feed chickens and catch lizards. I said to her, “Babe, you have a No. 1 song in the Netherlands. That’s a big deal!” She’s like, “Which city is that?” I’m like, “That’s Amsterdam.” And she goes, “I love Amsterdam. Can I watch ‘Avatar?’ ”

Pink poses with husband Carey Hart and children Willow and Jameson at a ceremony honoring her with a star on the Hollywood Walk of Fame in 2019. (Photo: Alberto E. Rodriguez, Getty Images)

Q: Has Jameson shown any interest in music?

Pink: Yes, but his favorite song is Pantera’s “Walk,” so I’m not sure what to do with that. He does love Bruno Mars. His dancing is more like a mosh pit kinda thing. He’s like a tiny Henry Rollins and Chris Farley all wrapped up into one body. I’m actually worried about him. (Laughs.) We’re taking that one day by day.

Q: Your breakthrough album, “Missundaztood,” turns 20 later this year. Could you have imagined then that you’d be where you are now?

Pink: Nope, because everyone around me was telling me that it would fail. The whole thing is just totally hilarious and awesome and there’s never a day that goes by that I don’t pinch myself. I have busted my butt, but at the end of the day, it’s all about the people around you and and seeing the opportunities when they appear. No one would have bet on this horse. (Laughs.) I don’t know if I would’ve.

Q: What piece of advice would you give your 21-year-old self?

Pink: I wouldn’t tell her anything. She’d kick me in the shin. But I think she figured it out. I put my head down, I perfected my craft and I was always true to myself. And it worked out – all the stars aligned. I love touring and for me, that’s all it’s about. I love songwriting and recording and singing, but I like being on the road with my gang.

Q: “Lady Marmalade” (from “Moulin Rouge!”) also turns 20 this summer. When you first recorded it, did you realize this was unlike anything else in pop?

Pink: It was a remake and it was this crazy mashup. I was so into it because of the different people on the record. It was just this thing we were gonna do and then bam! First No. 1 record (on the Billboard Hot 100).

Q: What do you remember about shooting the video?

Pink: I remember getting in a fight with Christina Aguilera and having to wear really short shorts. And I remember seeing that one part of the video where I turn around and I’m like, “Damn, I got abs.”

Q: What was the fight about?

Pink: Some people just don’t get along and we’re just those people. Like oil and water and it’s OK. I’ve learned later in life that not everyone is supposed to get along. I mean, it’d be nice if we all did, but it’s an animal thing, right? Some people you just, “Mm-mm. I don’t like your musk.”

Q: Have you spoken at all since then?

Pink: Oh, we’ve spoken over the years. We’re fine, we’ve hugged it out. Actually, when I was on “The Voice” a couple of years ago, it was awesome. It was so fun to be with her. And also, I think she’s insanely talented. I love her voice. But we’re not ever going to be best friends and that’s OK. I think I took her seat or something (on the “Lady Marmalade” set). I think I took the chair next to the director and apparently it was a hierarchy that I didn’t yet understand in the pop world.

Q: When was the last time you watched “Moulin Rouge!”?

Pink: Maybe at the premiere? I love the song. I used to perform it in concert. I try not to go backwards, I try to just keep moving forward. I also have never watched “Catacombs” (a 2007 horror movie starring Pink), but we’re not going to talk about that, are we? And I wouldn’t recommend it to anyone else!

Pink: Good! I hope the next time I talk to you you can still say that.

U.S. Retail Sales Plunge 3.0% In February, Much More Than Expected