Home » Business » Round 2 of states vs stores in vaping fight; Massachusetts shop owners punch back

As quickly as states across the country race to ban vaping products – in response to a nationwide spread of breathing illnesses – stores selling them are reacting just as swiftly to prevent it.

As reported by Reuters on Monday, several Massachusetts vape shop owners sued the state on Sunday for implementing a four-month ban on sales of all vaping products – a decision announced last week.

The plaintiffs argue that the ban– Mass Dynamics LLC, Boston
Vapor LLC and Vick's Vape Shop — argue the ban undermines the U.S. Food and Drug Administration's assessment that the Electronic
Nicotine Delivery Systems (ENDS) products and e-liquids are safe
to use and distribute.

Gov. Charlie Baker (R-MA) cited a public health emergency when the ban was made public.

Vermont and Maine officials announced on Thursday said they are considering taking the same action to create a regional response to the national crisis.

Michigan was the first state to ban flavored e-cigarettes on Sept. 4, and, 11 days later, New York announced a ban on flavored vaping products – which will be effective on Oct. 1.

Last  Thursday, the Centers for Disease Control and Prevention announced that the death toll from vaping-related breathing illnesses has risen to 13, while there are now 80-5 confirmed and probable cases.

Massachusetts has 61 suspected cases of vaping-related lung illness that have been reported to the state's Department of Public Health and no deaths.

As Monday's lawsuit suggests, businesses in Massachusetts are not happy with the new legislation, which came with no prior notice.

“It’s totally a disaster for us. For the whole industry," Pete Patel, owner of Liquid Smoke & Vape Shop in Allston, Mass., told WBUR radio, "Now we have to close down.”

Patel opened his store – which is lined with vaping products – just six months ago. Patel said those products accounted for 60 percent to 70 percent of his total sales, and without them, his business just can’t survive.

“Everything now is zero value, you know,” Patel said shortly after hearing about the ban. “Everything is zero value for four months and we gonna lose the money, everything.”

Massachusetts Cannabis Control Commissioner Shaleen Title — who was appointed by Gov. Baker — has concerns that people will look to the black market for vaping products and said the ban was a "terrible decision” which could lead people to get them on the unregulated market.

The ban is scheduled to be in effect until Jan. 25, 2020, and will be enforced by state and local officials. If businesses don't comply, Massachusetts’ Department of Public Health says store owners could face fines, product seizures, or other penalties.

The response in the Empire State to the vaping ban has been swift. The New York State Vaping Association is likely filing a lawsuit that aims to reverse the ban, according to Spike Babaian, who owns several Vape New York shops in the city.

The lawsuit will seek to keep flavors on the market so they’re accessible to adults that are looking for an alternative to smoking.

“Every [vaping] business in New York would close within 30 days if they couldn’t sell 90 percent of what they sell,” Babaian said. “We don’t want anybody to go back to smoking because they can’t access the product they use to keep them off cigarettes.”

Connecticut Gov. Ned Lamont (D-CT) will attempt to execute an executive order to ban flavored vaping products, but it is not clear if he legally can do that. He also said he will ask legislators to enact a ban in a special session this fall or in the regular 2020 session.

“I don’t know what I can do by executive order,” Lamont said at a recent press briefing, “but I’m going to be very strong going forward.”

New York Gov. Andrew Cuomo (D-NY) joined Lamont on Wednesday outside the Connecticut governor’s residence, and he added,  “It makes no sense to pass one set of rules in New York when they can just drive across the border to Connecticut and have a different set of rules and vice versa.”

However, Cuomo also said that a comprehensive approach does not mean all states must enact identical rules and regulations.

Cuomo also said that Connecticut must also end a five-year diversion of tobacco settlement funds away from cessation programs, but he did not pledge any specific funding level.

Lamont agreed, saying that – for Connecticut to work with its neighbors on a comprehensive approach to vaping – it will have to change its approach to cessation programs.

Since 2000, Connecticut has received more than $2 billion as part of a multi-state legal settlement with the nation’s five largest tobacco manufacturers, but only around $200 million of that has gone into the Tobacco and Health Trust, a special fund set up by legislators to fund anti-tobacco efforts. Lawmakers also took more than $113 million of that to help balance the budget.

“I know that over the last 10 years we’ve been siphoning off some of the money that’s supposed to go to tobacco cessation to other things,” Lamont said. “That’s going to stop.”

Meanwhile, a lawsuit was filed against e-cigarette maker Juul in the British Columbia Supreme Court, alleging the company targets minors and misleads consumers. The plaintiffs are currently moving to have the suit classified as class action.

This story was updated on Sept. 30th. It was originally published on Sept. 27th 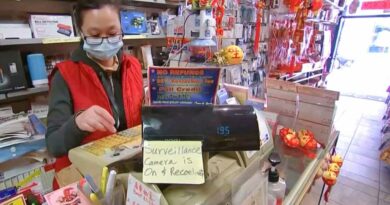 Paycheck Protection Program has run out of money for most borrowers. What you need to know

Cost Of This Aircraft Carrier Would Give Every American $400