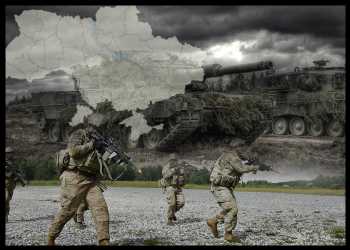 The Russian forces who are advancing in eastern Ukraine with continuous bombardment have captured half of the city of Severodonetsk, reports said.

The Norwegian Refugee Council said that thousands of civilians remain trapped in crossfire in the city without sufficient access to water, food, medicine or electricity.

“I am horrified to see Severodonetsk, the thriving city where we had our operational headquarters, become the epicenter of yet another chapter of the brutal war in Ukraine,” said Jan Egeland, Secretary-General of the Norwegian Refugee Council.

European Union leaders agreed on Monday to cut oil imports from Russia by 90 percent by the end of the year as part of a new sanctions package targeting that country. Pipeline imports will be exempt from the sanctions.

U.S. President Joe Biden has ruled out reports that his administration is planning to send long-range rocket systems to Ukraine.

CNN had reported that Washington is preparing to approve advanced, long-range rocket systems for Ukraine.

“We’re not going to send to Ukraine rocket systems that can strike into Russia,” Biden told a reporter after Marine One Arrival on Monday.

Responding to this, Ukraine’s Presidential advisor Oleksiy Arestovych said rockets with ranges of around 70 kilometers would be “more than enough” for the Ukrainian army to repel Russian offensives.