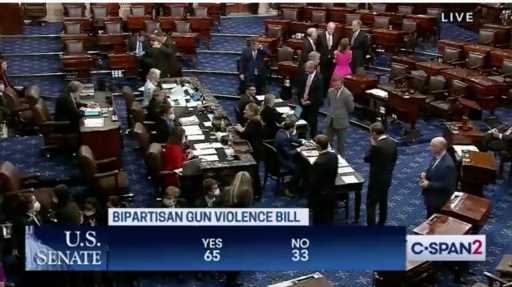 The Senate passed a compromise gun saefty bill on Thursday in a 65-33 vote, marking a rare time that lawmakers of both parties responded to a wave of mass shootings with legislation.

But the bill still falls short of what many gun reform advocates want, like a ban on assault weapons and a restriction on firearms purchases to those under the age of 21.

Those proposals enjoy widespread public support, based on recent polls, but were a non-starter as a bipartisan group of senators worked out a compromise.

The legislation, the Bipartisan Safer Communities Act, would expand background checks for those 18 to 21, give incentives to states to pass “red flag” laws, and expand a federal law that bans domestic abusers from acquiring guns. The legislation also provides funds for school safety and for mental health.

The bill now will go to the House, which is expected to vote on the legislation on Friday. President Joe Biden has indicated that he will sign it.

The senators, led by Sen. Chris Murphy (D-CT) and Sen. John Cornyn (R-TX) started holding talks shortly after the mass shooting in Uvalde, TX, in which a gunman killed 19 elementary school students and two teachers. The shooter had been able to legally purchase two assault weapons on his 18th birthday.

Ironically, the passage of the legislation came on the same day that the Supreme Court, in a 6-3 decision, expanded the rights of gun owners to carry concealed weapons outside the home. The court struck down a century-old New York law that required that those seeking a concealed carry license show that they had a “proper cause,” or special purpose, for it.

Even though the Senate bill marked the first significant piece of federal gun safety legislation in almost 30 years, it was still opposed by the National Rifle Association and other gun rights advocates.

Senate Majority Leader Chuck Schumer (D-NY) acknowledged that the bill “is not a cure-all for all the ways gun violence affects our nation,” but he insisted that “it is a long overdue step in the right direction” and that it is “going to save lives.”

The last major piece of legislation to clear the Senate was a ban on assault weapons that passed in 1994. But that restriction was allowed to expire a decade later, and the sales of assault weapons, like the AR-15, have proliferated. The AR-15 has been used in mass shootings over the past decade.

Netflix Axes Another 300 Staff, Taking Total Layoffs To More Than 450

3 things millennials are getting wrong about Social Security

U.S. Stocks May Come Under Pressure On China’s Retaliatory Tariffs