Home » Business » The iconic mansion from 'The Godfather' is back on the market at a $105 million discount. Look inside the Beverly Hills estate. 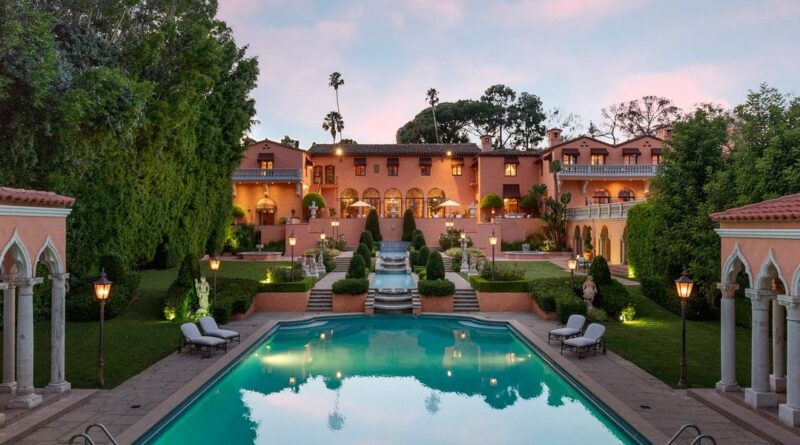 The historic Los Angeles mansion where the classic 1972 film "The Godfather" filmed scenes is back on the market for $89.75 million — a $105 million discount from its original asking price — after the owner declared bankruptcy on the property. 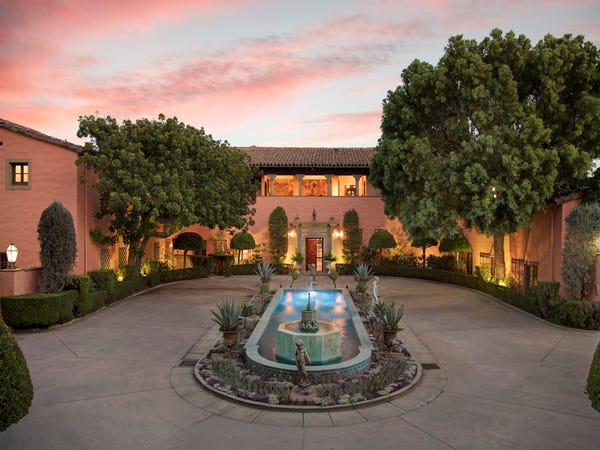 Now, the Mediterranean-inspired estate is listed at a 54% discount from its original asking price.

The new price comes after Ross was recently ordered to sell the property by a bankruptcy court following a petition from Fortress Investment Group, which said it’s owed more than $52 million in unpaid loans and interest, according to the Wall Street Journal. Ross had placed the LLC that owns the estate into chapter 11 bankruptcy in 2019.

Ross and his attorney did not immediately respond to Insider’s requests for comment for this story. 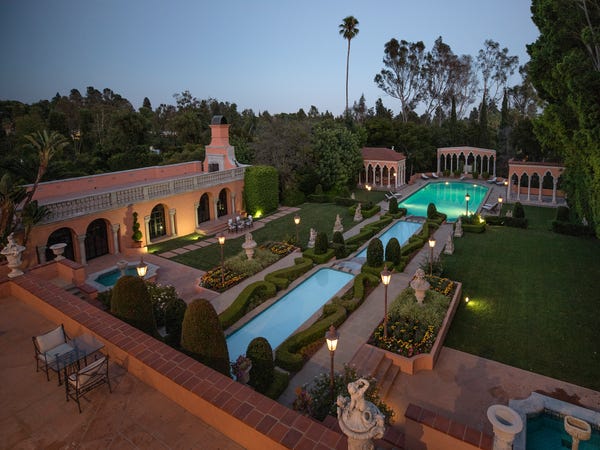 Once owned by media titan William Randolph Hearst, the property was formerly known as “the Beverly House” but is now being rebranded as “the Hearst Estate,” according to a spokesperson for colisting agent Marguleas of Amalfi Estates.

With its latest foray onto the market, the estate is now colisted by three brokers: Anthony Marguleas of Amalfi Estates, Gary Gold of Hilton & Hyland, and Zizi Pak of Rodeo Realty.

The Hearst Estate was used in several scenes from "The Godfather," where it portrayed the home of the character Jack Woltz, a movie producer who makes the mistake of crossing the Corleone family. 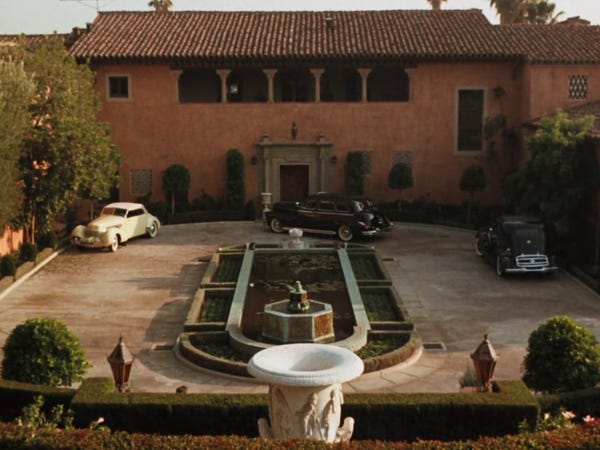 It's been widely reported that the mansion was the setting for one of the film's most iconic scenes in which Woltz wakes up to a bloody, severed horse head in his bed. 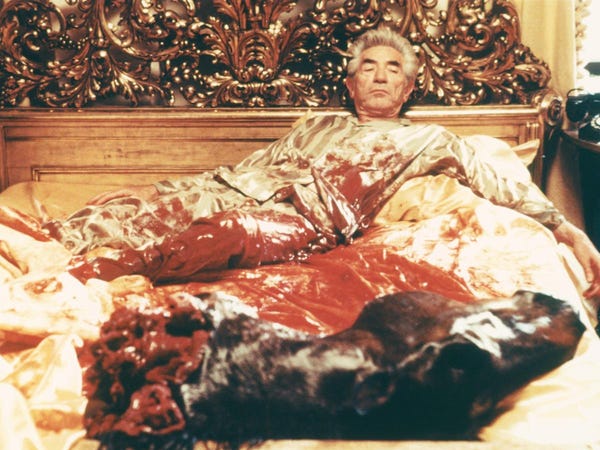 But Marguleas’ spokesperson told Insider that scene was in fact filmed inside an estate on Long Island in New York.

Paramount Pictures, which produced the movie, did not immediately respond to Insider’s request for confirmation on the filming location of the scene.

The mansion was also seen in Beyonce's 2020 visual album "Black Is King." 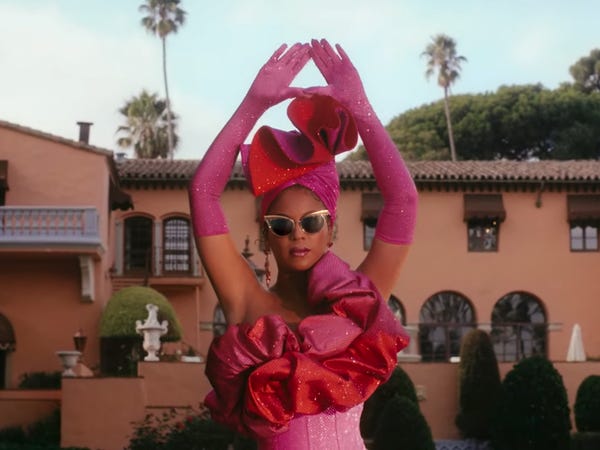 The Hearst Estate is first shown when Jay-Z rolls up in a vintage Rolls Royce, and the film features multiple additional shots of the interior and exterior of the property.

Visitors to the estate will have to go through a wrought-iron gate and up the 800-foot driveway. 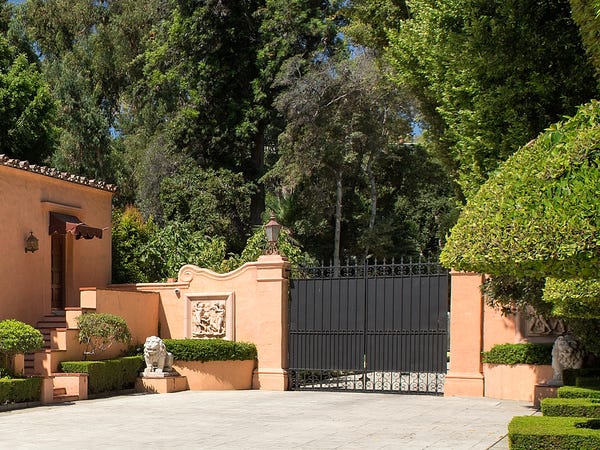 The home was designed by Gordon Kaufmann, an architect who designed many other lavish mansions in the Beverly Hills area. 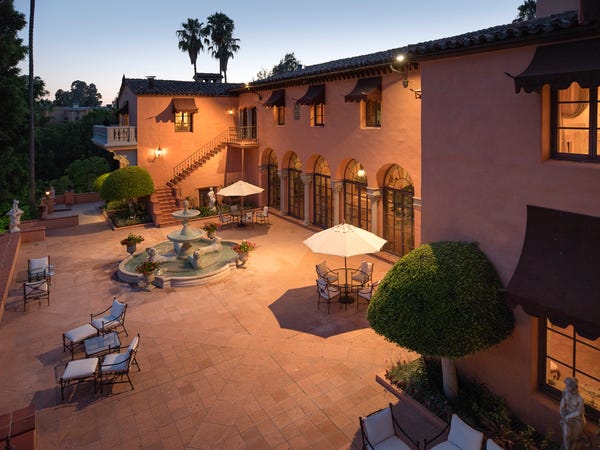 Several additions were made to the home in the 1990s, expanding it significantly, according to a former listing.

The home, which has two swimming pools, once belonged to publishing mogul William Randolph Hearst. 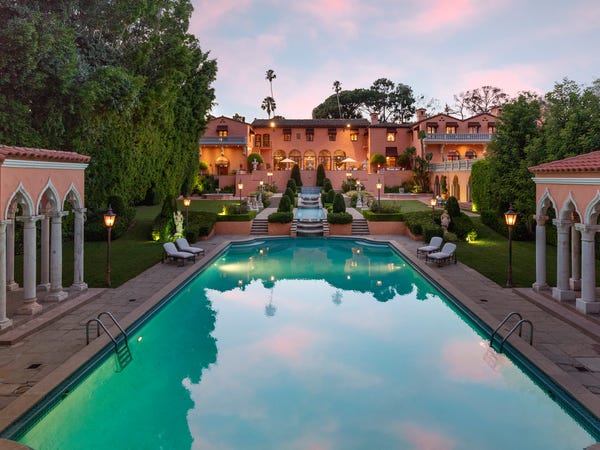 In addition to the pools, the home also has a private tennis court. 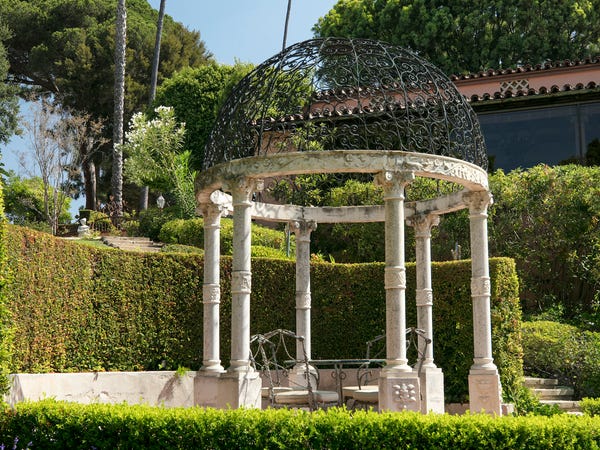 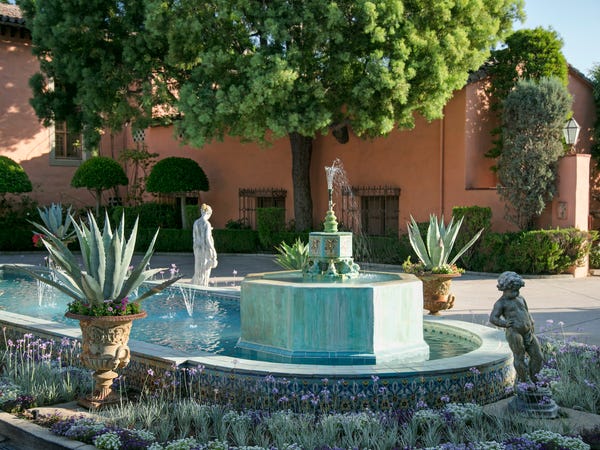 The interior of the mansion is just as impressive as the exterior. Like the outside, it's mostly decorated in warm, natural tones. 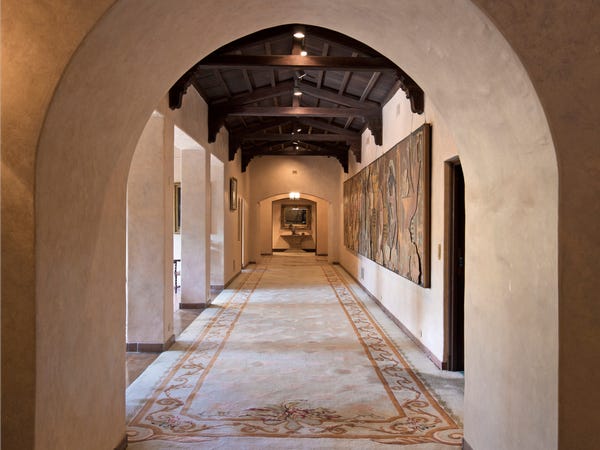 It includes a two-story library with hand-carved paneling and a detailed ceiling. The furnishings are opulent, with gold tones and touches throughout many of the rooms. 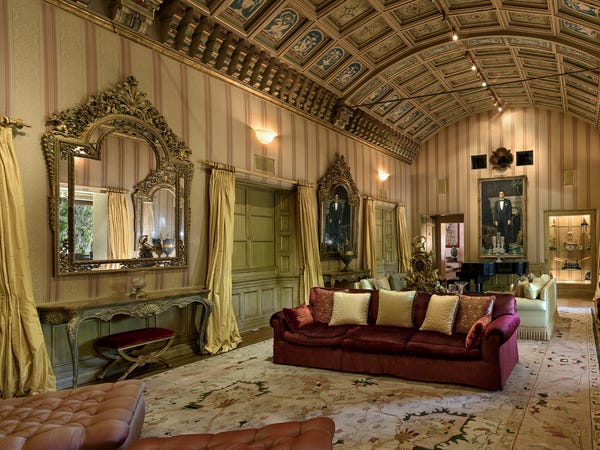 The living room, with its 22-foot-high arched ceiling, was sometimes used as a ballroom. 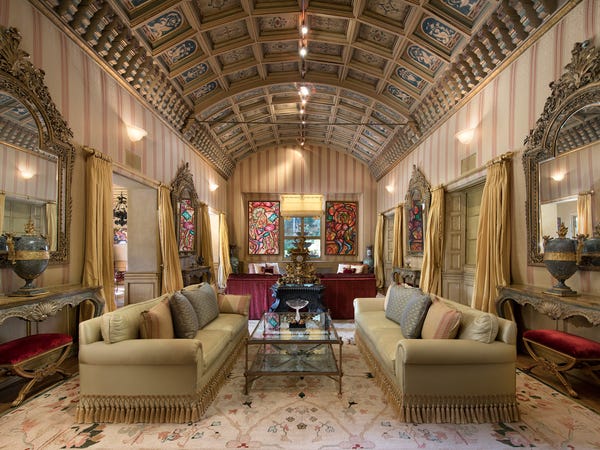 The mansion was well known even before its appearance in "The Godfather" — Jacqueline and John F. Kennedy spent part of their honeymoon there in 1953. 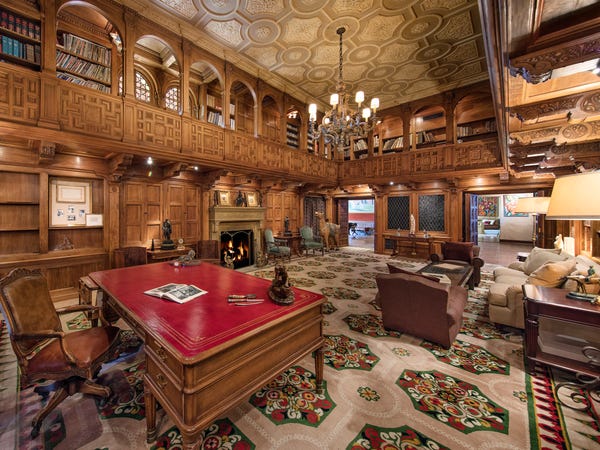 A stroll through the house would take you through its grand hallways, one of which is 82 feet long and the other more than 102 feet with a 40-foot wide mural. 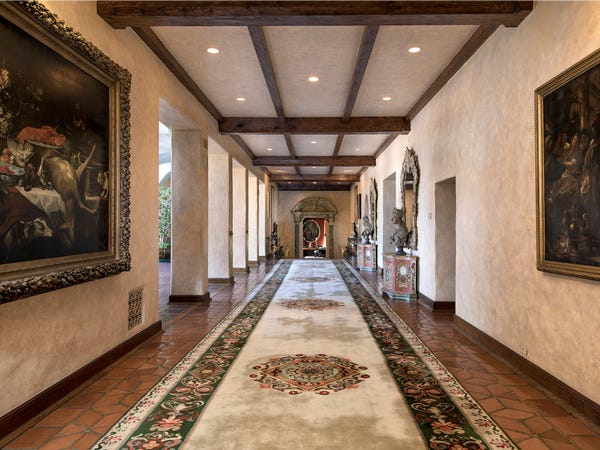 The 32-foot billiards room is open to the main hallway. 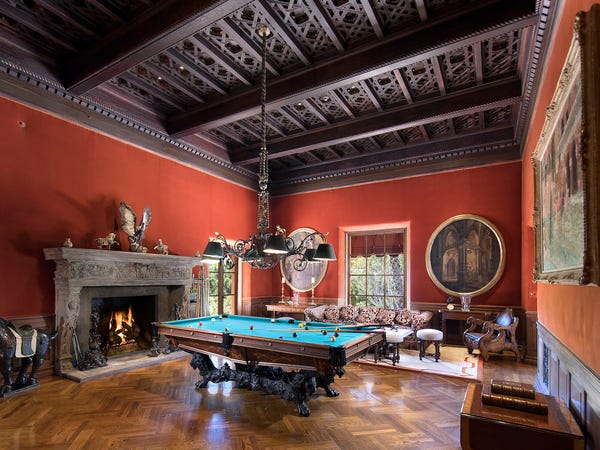 The pool area was also used in scenes from "The Godfather." 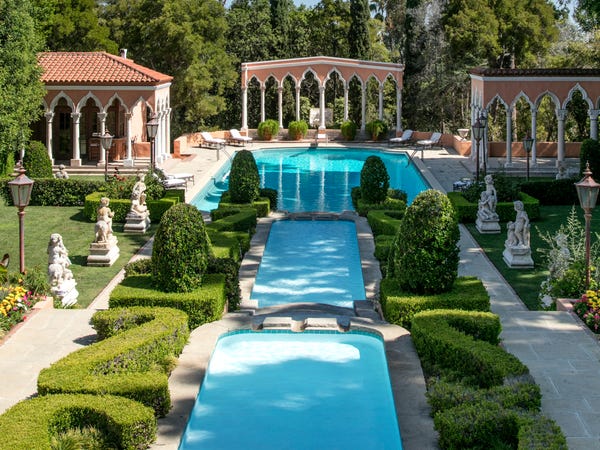 In the film, it doesn't look too different from today. 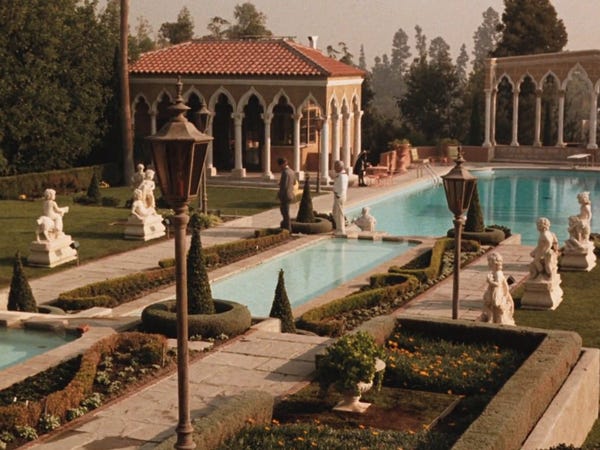 If the 19 bedrooms in the main house aren't enough, there's also a separate five-bedroom house on the property near the entry gate. 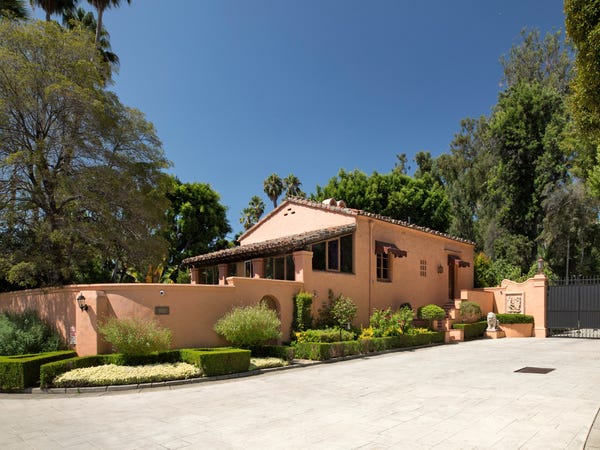 The terrace can reportedly seat up to 400 guests. 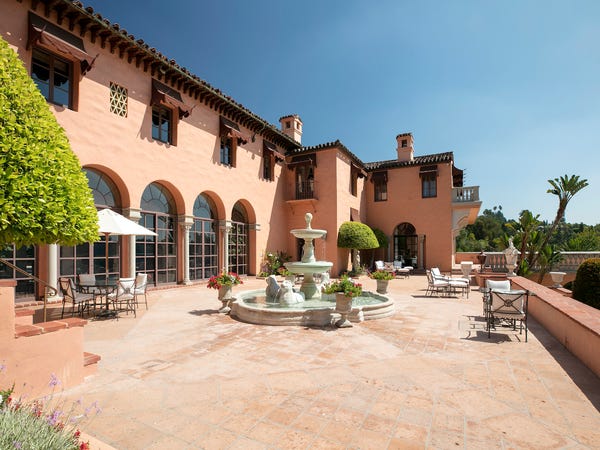 The Hearst Estate is not the only sprawling Los Angeles estate that's gotten a massive price chop recently. 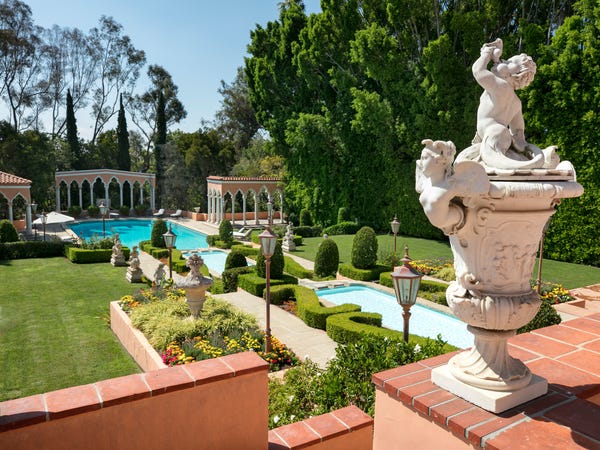 Another Beverly Hills estate, known as Villa Firenze, once listed for $165 million, just sold at auction for roughly $60 million.

And in December, a contemporary Bel Air home that was once asking $180 million dropped its price to $99 million.