This story is part of CNBC Make It's new millennial home-buying series. If you're interested in being featured, email reporter Alicia Adamczyk at [email protected].

Two years ago, Ver Starr decided to calculate how much rent he and his fiancee, Jenelle Yee, had paid over the past four years they lived together.

"It was upwards of six figures," he tells CNBC Make It. "And that just didn't sit easy with me."

That's when the Los Angeles-based couple, now 28, started saving money specifically for a down payment. They already were setting aside a significant portion of their income: Starr, a software engineer, was contributing 25% of his paycheck to retirement accounts, while Yee, a product manager, was putting about 90% of her income in high-yield savings accounts, retirement accounts and index funds. She already had $70,000 in savings that she'd been building up since she started working at age 13.

Starr, who is still paying off student loans, didn't start saving so aggressively until three years ago, when the couple moved from Austin to LA and saw their rent increase significantly. When they decided to buy a home, he didn't have much savings outside of his retirement accounts, so he found ways to cut back in order to contribute more to their down payment. He started small, by breaking his Starbucks habit: "I don't buy a $5.25 grande cappuccino anymore. I make my own cold brew for like $0.20."

He also stopped spending money on material items like video games and clothes.

As a couple, they cut cable, stopped eating out, reduced their car insurance premiums by going for the higher deductible and even sold items they didn't need anymore, like furniture and computer parts.

The couple closed in June 2019 and moved in a month later.

Today, their total housing costs run about $3,850 per month. That's more than what they were paying in rent, but it's worth it, says Starr: "We're building our equity in something that we own." Plus, it's an upgrade from their previous 2-bedroom apartment and a space where they plan to live when they start a family.

Here's a breakdown of all of the expenses they paid upfront: 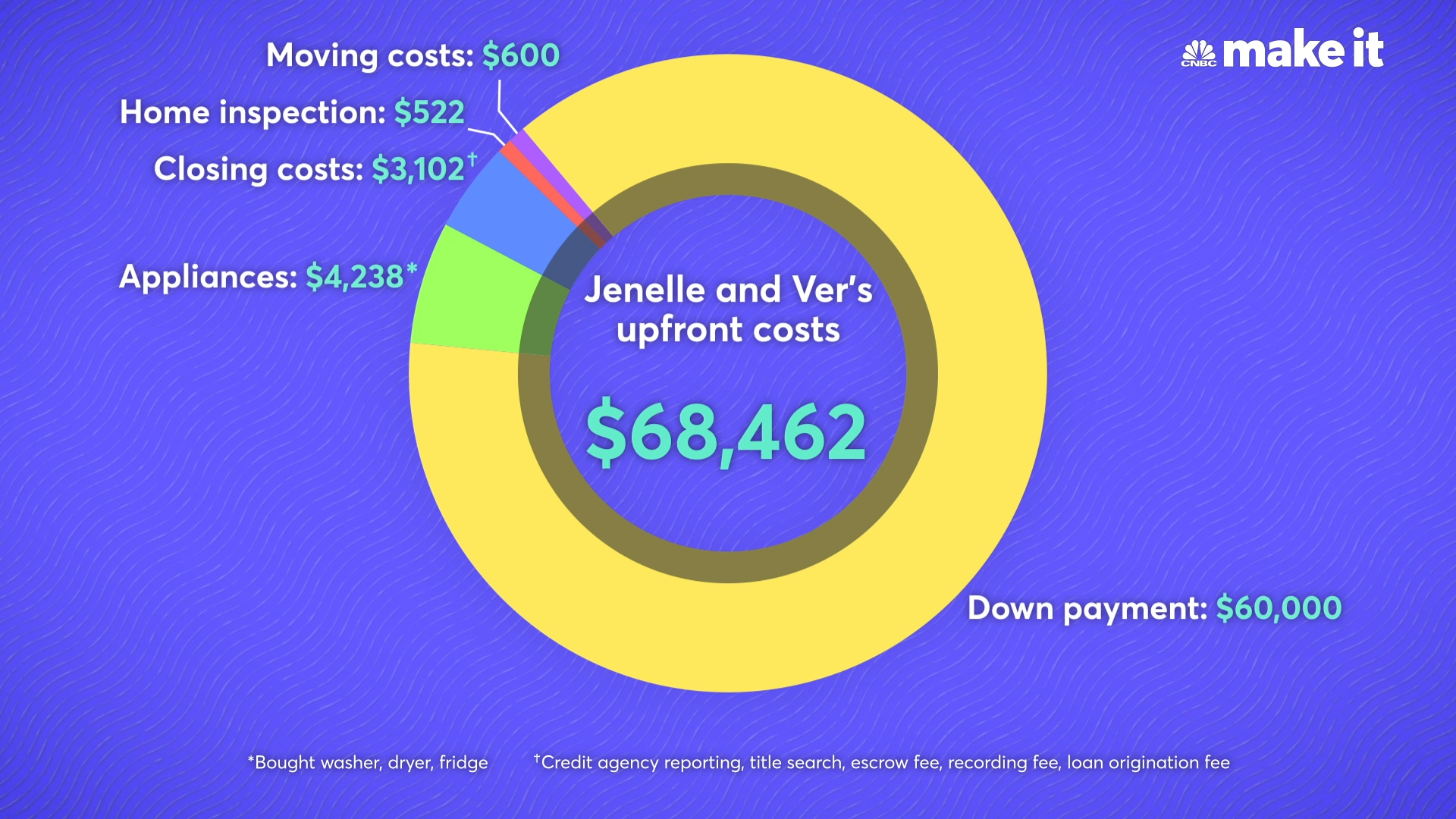 "There were definitely a lot of low points in the process," says Starr about the stress of trying to find a new home. "We were looking for a place for almost a year and a half." They had to pass up two homes they loved because they weren't within their budget and, at one point, lost a bidding war between two other buyers on another property. 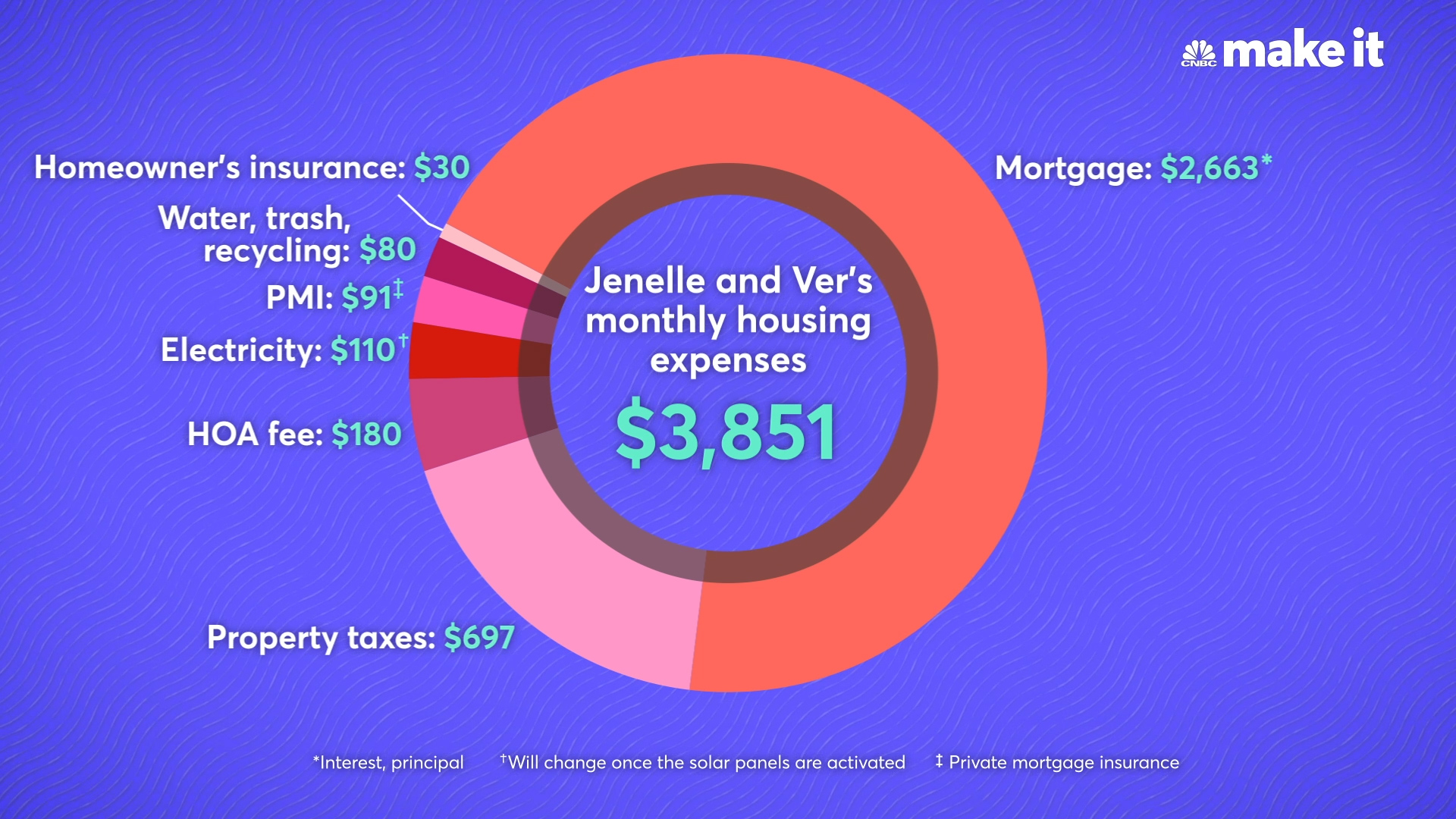 Here's what Starr and Yee learned from the process and what advice they would pass on to other first-time buyers.

Starr and Yee were pre-approved for a loan up to $800,000. (During the mortgage pre-approval process, a lender analyzes your income and creditworthiness and tells you how much you can borrow.)

While they could technically afford to spend $800,000 with their respective salaries — Starr makes $100,000, while Yee makes $85,000 — they chose to look at properties under $600,000, a budget they settled on by working backwards from their monthly rent payment. "Since we were already paying closer to $3,000, we were looking at monthly payments that would be around that," says Starr.

Sticking to a firm budget wasn't always easy, Yee adds: "The second condo we looked at was a brand new build and the starting prices were around $700,000 to $800,000. I just fell in love with it. We both thought somehow we would be able to make it work. Our real estate agent team was trying to find work-arounds for us, too. But we realized that it just wasn't going to work within our budget. Although that was hard to take in, we just had to move on and keep looking elsewhere."

In the end, they stayed just under budget with their $599,000 home. Their current monthly housing costs are higher than they were when they were renting by about $800, Starr says, but it's worth it to own: "We really like being out of that rent cycle and not having to feel stressed out every year when the rate of rent increases."

Starr and Yee spoke with five different mortgage lenders before settling on one that gave them $15,000 in credits toward closing costs and upgrades.

"The seller's preferred lender was offering $5,000 in credits, plus another $2,500 if one of us worked in education," explains Starr. "Jenelle's organization is a non-profit working in education, so the lender gave us the extra $2,500." As for the other $7,5000 in credits, they negotiated those: "We straight up asked for $20,000 in credits and were counter-offered down to $15,000." They used the credits to pay for a portion of the closing costs and upgrade the floors and cabinets.

They're also happy with the financing terms of their mortgage: a 30-year fixed rate loan at 4.125%.

"You can go out and find one lender for the pre-approval process, but if a seller has a preferred one, sometimes it's better to work with them to get the best terms," says Starr. That said, "you should definitely shop around. Always check on what the rates are because they do go up and down — a month before we got our rate of 4.125, rates were closer to 5%. And now, they're going even lower."

Be willing to compromise on location

When the couple first started looking for homes across LA, most of the properties they saw were priced above their budget. That's when they realized they needed to look farther from the center of the city.

"We realized that it's OK to look for something in the outskirts of whichever city you're living in," says Yee. "Usually, the prices will be a little lower if you just to commute an extra 20 or 30 minutes. Gardena is about 20 to 30 minutes away from central LA, so that was a little bit of a sacrifice we had to make in terms of geographic location."

While Yee can work from home, their new location means a longer, 1.5-hour commute for Starr, who takes a bus and train from home to his office in Santa Monica.

"We're not as close to some things we used to like," adds Yee, "but I think just being open to different locations is something people need to take into consideration when they're looking for homes."

Don't miss: How this New Yorker saved to buy her first Brooklyn apartment at age 25