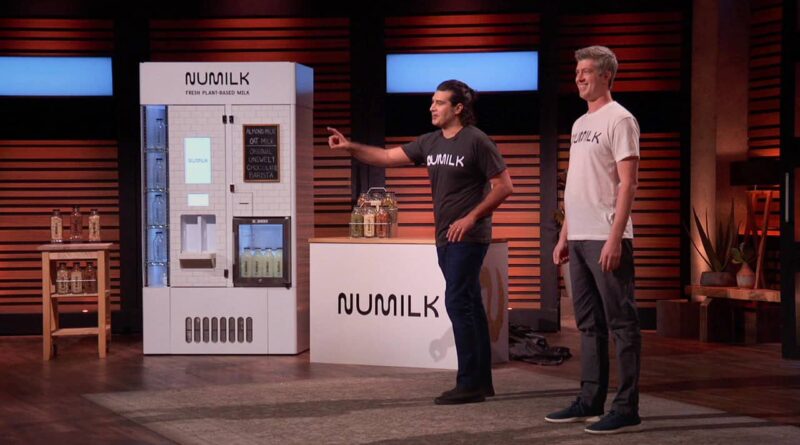 "Sharks, milk today means something totally different than what the milkman used to deliver to our homes," Tolwin said on the show. "Sure, some of us still drink cow's milk, but most of us have switched to almond milk, oat milk or even hemp milk."

That's why he and Savino created Numilk in 2018. Numilk began as a "food-tech" company selling plant-based milk kiosk machines.

"We built a custom machine for grocery stores where shoppers can make pure, dairy-free milk at the push of a button," Tolwin said. "The milk has a 7-to-10 day shelf-life and it has to stay in the fridge."

At one of these kiosks, a customer spends $2.00 for a reusable Numilk bottle as a one-time charge, and then they'll spend $3.99 each time they fill the bottle with fresh plant-based milk.

On average, each individual kiosk generates $50,000 in revenue per year, Tolwin said, while each machine costs the company $30,000 to manufacture. (Tolwin says that manufacturing cost will "come down to $15,000 at scale," once the company starts producing more machines.)

Extending their product line, Tolwin and Savino later created a stainless-steel, countertop unit for cafes and coffee shops, which are sold for $699 each.

And, in summer 2022, Numilk plans to roll out a smaller, countertop unit for in-home use to be sold for $199. Both the professional units and the at-home machines make a variety of drinks like almond milk, oat milk, matcha lattes and protein shakes from Numilk's pre-packaged pouches of ingredients.

"We took our grocery machine and we shrunk it down so it works on your countertops," Tolwin said.

Shark Daymond John especially liked that idea. "That right there is a necessity for the family, I think," John said.

Intrigued, Cuban decided to try out Numilk almond milk through its kiosk machine. He was quickly impressed, calling the machine "fast" and "cool."

"The milk I just made is incredible," Cuban said. "You can tell it's fresh almonds."

Of course, the Sharks were curious about sales numbers, especially with Tolwin and Savino asking for a $1 million investment for just 5% equity, which would be a $20 million company valuation.

And that's when the pitch hit a hiccup.

Although the company raised $12 million from outside investors, Tolwin revealed that in over three years in business, Numilk has lost $7 million in total, citing high research and development (R&D) costs.

Despite the history of losing money, Cuban was interested in making an offer based on the potential he saw in Numilk's in-home countertop machine.

"I obviously love the stainless-steel version that you're putting in coffee shops right now," Cuban told Tolwin and Savino. "I think that'll sell like hotcakes at home. I think you'll sell a million units easily."

So, Cuban proposed a unique investment:

"I'm going to give you $2 million. One million [dollars] of that is going to be for 7% equity. The other million is going to be a loan at 3% interest, but I get an additional 3% of stock as advisory shares or straight up equity," Cuban explained. "But, if you don't use the loan, you don't have to give me the additional 3%. So in total, if you use all the capital, it's $2 million for 10%."

The duo did try to negotiate with Cuban, but the investor wouldn't budge. So, Tolwin and Savino accepted the offer, which could eventually give their company the $20 million valuation they sought.

Check out: Use this calculator to see exactly how much your third coronavirus stimulus check could be worth