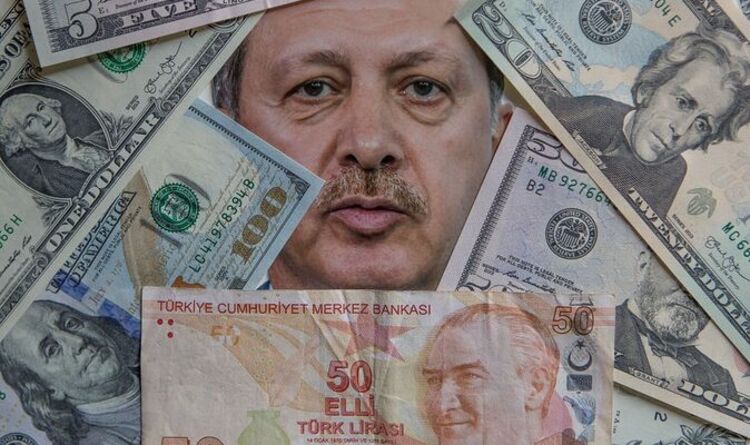 The Central Bank of the Republic of Turkey has decided to hold interest rates at 14 percent, having maintained them at this level since the start of the year. In a statement the bank said geopolitical risks had further increased uncertainty as well as adding to the problems of inflation. The bank said: “Increase in inflation in the recent period has been driven by rising energy costs resulting from the heightened regional conflict, temporary effects of pricing formations that are not supported by economic fundamentals, supply side factors such as the rise in global energy, food and agricultural commodity prices, supply constraints, and demand developments.” Inflation in Turkey has soared to a two-decade high recently with official figures putting it at 54.4 percent for February.

The central bank however said it expected inflation to start to ease on the back of measures it has taken so far as well as a potential resolution to the conflict in Ukraine.

While the bank has not raised interest rates it has taken the step of creating a scheme to guarantee bank deposits and pay savers the difference on their savings in lira and any price change with the dollar.

The idea has been to try to encourage Turks to keep money in liras to maintain the value and avoid Turkey’s widespread issue of dollarisation which has seen people withdraw liras and convert them into more stable currencies such as the dollar or even commodities like gold.

In its statement the bank said it would “continue to use all available instruments decisively within the framework of liraization strategy until strong indicators point to a permanent fall in inflation and the medium-term five percent target is achieved.”

A key issue for the central bank has been navigating President Erdogan’s strong opposition to interest rates due to his belief that they cause inflation- contrary to most mainstream economics.

During 2021 the bank carried out several cuts to interest rates which saw a rapid depreciation of the lira, which nearly halved in value during the second half of the year.

The lira is now second only to the ruble for declines among emerging market currencies after Russia’s economy was rocked by sanctions in the wake of the Ukraine invasion.

While the deposit scheme achieved some stability after its introduction recent declines in the lira have suggested it is struggling to work with some analysts cautioning it may undermine Turkey’s financial stability in the long run.

In a research note Muhammet Mercan, Chief Economist at ING Turkey, wrote: “Prioritising the liraisation strategy since December, the Central Bank of Turkey has adopted a wait-and-see approach and kept a more optimistic view than that of the market on the country’s inflation path.”

While Turkey looks to alternate strategies in the face of surging inflation its position is increasingly at odds with other global economies.

On Wednesday US central bank the Federal Reserve raised interest rates for the first time since before the pandemic as inflation reached 7.9 percent in February.

Meanwhile in the UK the Bank of England has already carried out consecutive rate hikes since December last year.

With inflationary pressures mounting in Turkey speculation has grown that Mr Erdogan may need to re-evaluate his stance on interest rates, particularly given next year’s elections.

Christian Maggio, head of portfolio strategy at TD Securities, told Bloomberg Turkey would have no choice but to follow the likes of the US with a prediction interest rates would rise as high as 28 percent this year.

CCD’s fundraising could be hit by complex shareholding