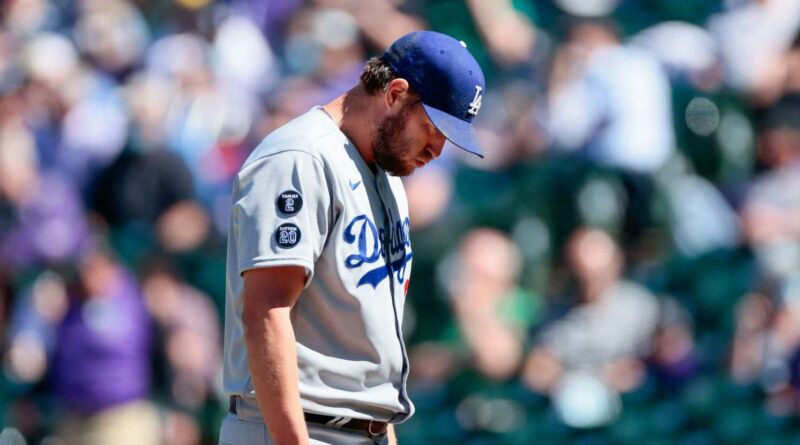 DENVER — Yes, even when you’re the mighty, talented and filthy-rich Los Angeles Dodgers, you can have days like this.

The Dodgers may have removed the burden of their World Series drought last year, but on opening day Thursday at Coors Field, they showed that bizarre things can happen to even the greatest of teams.

The Dodgers had one of their own teammates rob them of a homer. Their best player misplayed a fly ball into a triple. Their World Series hero allowed a routine grounder to squirt through his legs for a run. Their three-time Cy Young winner had the worst opening-day start of his career. Their bullpen threw three wild pitches in the same inning. And their powerful lineup stranded 14 baserunners by going 3-for-16 with runners in scoring position.

So yeah, even when you’re the Dodgers, you can look like the Colorado Rockies and lose 8-5 to the team that’s expected to finish with the worst record in the National League West.

While this game may already be on the Rockies’ 2021 highlight reel, the Dodgers can only hope the memories of this one last as long as a can of Coors Light.

“Baseball’s a long season, you’re going to be some games like this,’’ Dodgers manager Dave Roberts said. “Our club, for the most part, doesn’t have too many games like this.’’

LINDOR: 'A little kid from Puerto Rico' gets his $340 million payday

MLB 2021: World Series and award predictions for the new season

It’s silly, of course, to suggest that one game means anything, let is alone a sign that the Dodgers may be the latest to suffer a World Series hangover.

“I think it’s all kind of a mental thing,’’ said Dodgers right fielder Mookie Betts. “If you say there’s a hangover, a hangover is more bound to happen. …To me, those are all excuses. You fix your mind to go into battle and let the chips fall where they may.”

U.S. Existing Home Sales Pull Back Much More Than Expected In September

THE DIGITAL HEALTH ECOSYSTEM: Where players across the ecosystem stand on digital transformation and what healthcare's new normal looks like