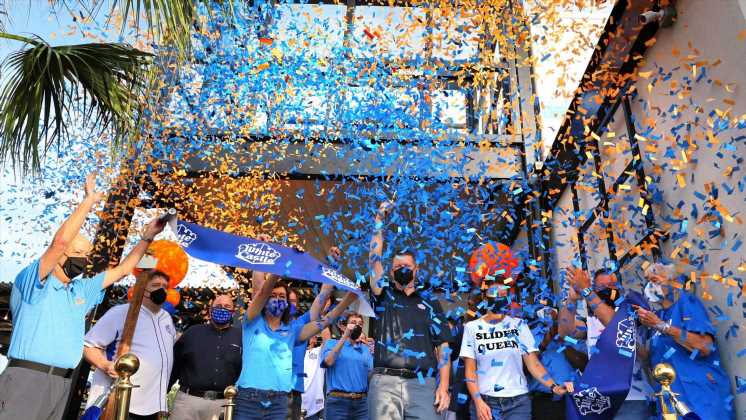 A White Castle opened up a location in Orlando on Monday, and people couldn’t wait to get their hands on the signature hamburger sliders in what the chain says is its largest location in the world. Well, technically, they could wait, and many did spend hours in long lines to get their orders.

The fast-food chain has over 375 locations in 13 states, primarily in the Midwest. There was a White Castle in Miami long ago before the chain left the state in 1968, according to the Tampa Bay Times. The Orlando location now makes it 14 states.

“We built it because we figured that in Florida they would have the largest craving for our products,” White Castle CEO Lisa Ingram told the Orlando Sentinel.

The 4,567-square-foot restaurant opened shortly after 8 a.m. on Monday, and people were so excited for the opening that there was a massive line of cars lined up outside the restaurant, located near Disney World. Some people said the wait was around four hours long.

New cooks at White Castle?: Restaurant to test out Flippy kitchen robot to cut down on human contact with food

Opening day for ‘White Castle’ in Orlando. It’s only 9am. @WhiteCastle#WhiteCastleOrlando#WhiteCastlepic.twitter.com/m4t55UNGfd

Got some drone video of the MASSIVE drive-thru line for @WhiteCastle in Orlando. #GrandOpeningpic.twitter.com/3836nnJm3u

Even when blind drunk, White Castle is like a 4 out of 10. This is insane. https://t.co/Bw2T9YoKhi

The inside of the store was just as busy, and the company said there was a limit of 60 sliders per order due to high expected demand.

Despite the limit in sliders, on the menu was the crave pallet, where people could get 6,920 sliders for $6,200. The store also had some interesting features, such as a futuristic napkin dispenser.

JavaScript is not available.

Some people were hyped to see White Castle make its return to the Sunshine State, while others questioned it.

Floridians on their way to the new White Castle in Orlando at 6AM on a Monday.pic.twitter.com/rLZoey85hN

Floridians sitting in an hours-long line in the morning to get White Castle at the new world’s largest White Castle in Orlando is the most Florida thing I’ve heard today. It’s still early, though.

Even when blind drunk, White Castle is like a 4 out of 10. This is insane. https://t.co/Bw2T9YoKhi

JavaScript is not available.

This is not the first time people have waited hours for a new fast-food restaurant. People waited over 14 hours when west coast chain In-N-Out opened up a location in Colorado in November.