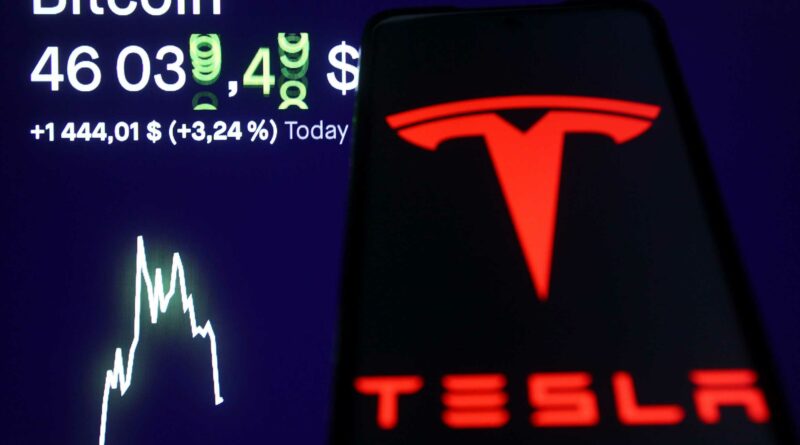 Elon Musk's decision to stop Tesla from accepting bitcoin as payment has led to fresh scrutiny of the cryptocurrency's environmental impact.

Musk said Wednesday that Tesla had halted purchases of its vehicles with bitcoin due to concerns over the "rapidly increasing use of fossil fuels for bitcoin mining."

He alluded to data from researchers at Cambridge University which shows bitcoin's electricity usage spiking this year.

Tesla won't sell its bitcoin — the automaker is sitting on $2.5 billion worth of the digital coin — and Musk said it intends to resume transactions with bitcoin once mining "transitions to more sustainable energy."

"We are also looking at other cryptocurrencies that use <1% of Bitcoin's energy/transaction," he said.

Musk's comments roiled cryptocurrency markets, which have shed as much as $365.85 billion in value since his tweet.

Why is Musk worried?

Critics of bitcoin have long been wary of its impact on the environment. The cryptocurrency uses more energy than entire countries such as Sweden and Malaysia, according to the Cambridge Bitcoin Electricity Consumption Index.

To understand why bitcoin is so energy-intensive, you have to look at its underlying technology, the blockchain.

Bitcoin's public ledger is decentralized, meaning it isn't controlled by any single authority. It's constantly being updated by a network of computers around the world.

So-called miners run purpose-built computers to solve complex math puzzles in order to make a transaction go through. This is the only way to mint new bitcoins.

Miners do not run this operation for free. They have to shell out huge sums on specialized equipment. A key incentive of bitcoin's model, known as "proof of work," is the promise of being rewarded with some bitcoin if you manage to solve its complex hashing algorithm.

It's worth noting that dogecoin, which has risen wildly in price lately on the back of support from Musk, also uses a proof-of-work mechanism.

Carol Alexander, a professor at the University of Sussex Business School, explains that bitcoin's mining "difficulty" — a measure of the computational effort it takes to mine the cryptocurrency — has been going "up and up" over the last three years.

"More and more electricity is being used," Alexander told CNBC. "That means that the network difficulty will also be going up (and) more miners are coming in because the hash rate's going up."

Bitcoin's price has risen almost 70% so far this year. As it goes up in price, the revenue to miners also increases, incentivizing more participants to mine the cryptocurrency.

Meanwhile, Musk isn't the only one who's worried about the environmental impact of bitcoin. In February, Treasury Secretary Janet Yellen warned that the digital coin is "extremely inefficient" for making transactions and uses a "staggering" amount of power.

Does bitcoin actually harm the environment?

It's complicated. On the one hand, bitcoin's network uses an unfathomable amount of energy. Much of the mining of bitcoin is concentrated in China, whose economy is still heavily reliant on coal.

Last month, a coal mine in the Xinjiang region flooded and shut down. This took nearly a quarter of bitcoin's hash rate — or computing power — offline, according to crypto industry publication CoinDesk.

In March, China's Inner Mongolia region said it would shut down cryptocurrency mining operations in the region due to concerns over energy consumption.

On the other side of the debate, bitcoin investors have attempted to push back on the narrative that it's harmful for the environment.

While it's difficult to determine the energy mix that powers bitcoin, some in the crypto industry say miners are incentivized to use renewables as it's getting cheaper to produce them. In China, the province of Sichuan is known to attract miners due to its cheap electricity and rich hydropower resources.

Last month, Jack Dorsey's fintech company, Square, and Cathie Wood's Ark Invest put out a memo claiming that bitcoin will actually drive renewable energy innovation. However, critics said they had a vested interest in doing so.

Alexander said the debate around bitcoin's environmental impact was misguided as most transactions with the digital asset aren't happening on the blockchain.

Regardless of whether bitcoin is actually a polluter or not, the negative connotations around its energy consumption have worried investors conscious of companies' ethical and environmental responsibilities.

ESG, or environmental, social and corporate governance, has become a growing trend in financial markets, with portfolio managers increasingly incorporating sustainable investments into their strategies.

Some Tesla shareholders may be worried that the company is betting big on bitcoin while also claiming to be a green energy company.

"Bitcoin backers will be wondering where this leaves the future of the cryptocurrency," Laith Khalaf, a financial analyst at investment firm AJ Bell, said in a note Thursday.

"Environmental matters are an incredibly sensitive subject right now, and Tesla's move might serve as a wake-up call to businesses and consumers using Bitcoin, who hadn't hitherto considered its carbon footprint," Khalaf added.

"Tesla's decision certainly puts pressure on other big companies who accept Bitcoin to review their practices, because boardrooms will now be wary about getting it in the ear from ESG investors on the shareholder register."

Tough times ahead for Singapore Airlines, but one analyst says it appears better positioned than its peers

See the moment CNN called the race for Joe Biden