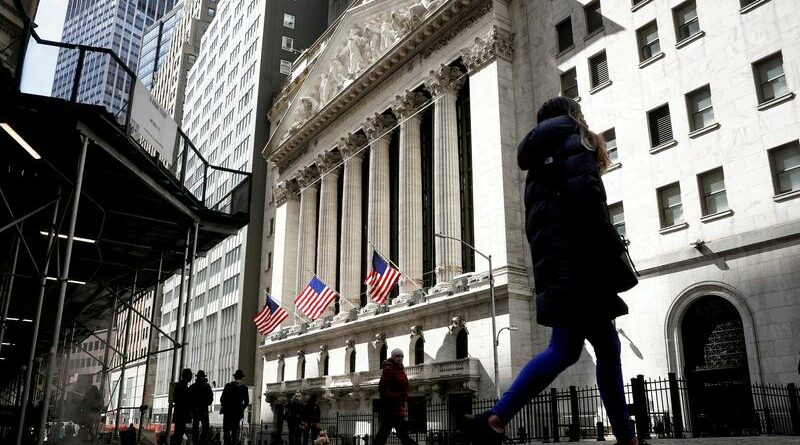 WASHINGTON/LONDON (Reuters) – Wall Street sank and European stocks suffered their worst one-day rout in three weeks on Wednesday on uncertainty over the pace of economic recovery, as investors’ move away from riskier assets lifted the dollar to one-week highs.

Accommodative central bank policies and optimism about reopening economies have pushed equities to record levels but concerns are growing about the impact of rising coronavirus infections due to the Delta variant.

Markets are also still assessing data from last week which showed the U.S. economy created the fewest jobs in seven months in August, and wondering how the U.S. central bank will respond.

The Fed should move forward with a plan to taper its massive asset purchase programme despite the slowdown in job growth, St. Louis Federal Reserve Bank President James Bullard said in an interview with the Financial Times on Wednesday.

“Everything is tapering, tapering, tapering. We are looking at every single central bank – when is the next one?” said Eddie Cheng, head of international multi-asset portfolio management at Wells Fargo Asset Management, though he added: “The Delta variant impact is still running like a wild card”.

“September is the month investors confront reality,” said Peter Tuz, president of Chase Investment Counsel in Charlottesville, Virginia, pointing to uncertainty over the Fed’s tapering plans and inflation fears as a reason investors are taking profits or reallocating funds.

The coronavirus Delta variant and concerns over the economic recovery were also weighing.

“What is likely ahead of us is a continued but temporary deceleration of economic activity of one to three months which likely started in August,” said Sebastien Galy, senior macro strategist at Nordea Asset Management.

Federal official Robert Kaplan was due to speak later on Wednesday.

In Europe, markets are focused on whether the European Central Bank will this week begin to scale back its bond purchase programme.

The dollar paired some gains after jumping to a one-week high against a basket of other major currencies. It also hit a one-week peak against the the single currency and was trading at $1.1826.

Longer-dated U.S. government bond yields slipped on Wednesday coming off a two-day climb after labor market data and ahead of an auction by the Treasury in 10-year notes. Yields on 10-year Treasury notes fell to 1.3495%, retreating from this week’s eight-week highs. [US/]

“Fears that central banks might start to taper their asset purchases seems to have knocked away a little confidence, particularly given tomorrow’s ECB decision where many expect we’ll begin to see the start of that process, not least with inflation there running at its highest levels in almost a decade,” Deutsche Bank analysts said in a note.

Bitcoin continued its rout, down 1.1%.

Shares of Coinbase Global Inc dropped over 2% after the firm revealed it has received a legal notice from the top U.S. markets regulator.