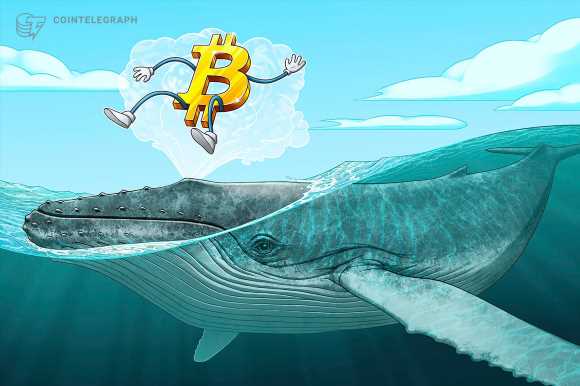 A veteran miner has cracked open their 2010 stash of Bitcoin, with crypto analysts spotting 100 BTC being transferred from two wallets that had laid dormant for more than a decade.

Prior to today’s transaction, the addresses had not seen any activity since receiving a 50 BTC Coinbase reward each nearly 11 years ago, except for two incoming transactions worth just 0.00000547 BTC each that were sent to the wallets in the last six months.

The Feb. 25 transaction combined the two mining address outputs, indicating both addresses belong to the same owner. The two blocks were mined only a couple of hours apart on Jun. 10, 2010.

Bitcoin is currently trading for $49,800, giving the coins a combined value of nearly $5 million. With BTC trading for $0.08 when the coins were mined, the whale’s holdings have increased in value by 622,500 times.

About half of the coins were moved to a wallet belonging to German peer-to-peer exchange Bitcoin.de, which has been in operation since 2011. For now, the remaining coins are sitting in a newly created legacy address.

Forked altcoins such as Bitcoin Cash (BCH) and Bitcoin SV (BSV) have not yet been peeled from the BTC.

The coins, mined in blocks 60365 and 60385, are unlikely to belong to Satoshi Nakamoto, who is suggested to have mined at least 1.1 million BTC.

The movement of 2010 era coins is an uncommon occurrence, with researchers identifying just 18 transactions involving BTC with inputs from July 2010 or before in 2021 so far.

In May 2020, 50 Bitcoin moved from a 2009 mining address, triggering excited speculation the BTC may have belonged to Satoshi.

BITCOIN PRICE IS BACK? Cryptocurrency News Update – Banks Are Bullish on Cryptos?

Bitcoin for Everyone — Lesson 1: What is Bitcoin?