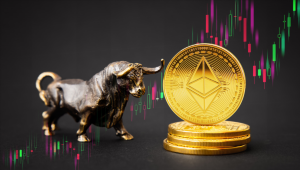 The Ethereum blockchain recently split in two due to exploitations induced by a consensus flaw on the network’s nodes. However, the price action has remained largely unaffected.

Ethereum price is approaching $3,300 once more, indicating that bulls are preparing for another attempt at a breakthrough.

In the last few weeks, the price of Ethereum has struggled to achieve new highs. Bulls exhibited weakness after reaching the $3,300 resistance on August 14th after a series of slightly higher highs.

Over the weekend ETH is expected to retest the $3,300 level. A clear break above the level can potentially pump the rally further to new local highs.

Even while the price of Ethereum was mostly unaffected by the incident, it’s worth noting that the state of a few on-chain measures did somewhat deteriorate.

To begin with, the percentage of active addresses has dropped from 0.84 percent to 0.82 percent in the last day. Similarly, in the same one-day period, the number of transactions fell from 1.13 million to 1.008 million.

Additionally, on the 27th, the gas fee was significantly higher than usual, increasing unfounded doubts about Ethereum’s overall utility.

As a result, one of the key goals of the London hark-fork was to lower gas prices. However, based on the blue spikes seen over the last day, it’s reasonable to predict that stabilisation will take a little longer than expected.