Taliban forces sealed off Kabul’s airport on Saturday to most Afghans hoping for evacuation, and most NATO nations flew out their troops after two decades in Afghanistan, winding down a frantic airlift that Western leaders acknowledged was still leaving many of their citizens and local allies behind.

The United States, which says round-the-clock multinational flights have evacuated 117,000 people since the Taliban claimed Kabul on August 15, was keeping up airlifts ahead of President Joe Biden’s Tuesday deadline for withdrawal.

As it neared the end of a 20-year military involvement in the country, the United States said it had killed two Islamic State militants planning attacks in Afghanistan, following a deadly suicide bombing outside the airport on Thursday.

American officials also warned of a high risk of further attacks by the group.

Biden promised on Thursday that Washington would hunt down the perpetrators after scores of Afghans and 13 US troops were killed in Thursday’s blast, the most lethal incident for US troops in Afghanistan in a decade.

An overnight US drone attack killed two Islamic State planners and wounded another in Nangarhar province, US Army Major General William Taylor said on Saturday, referring to an eastern area that borders Pakistan. 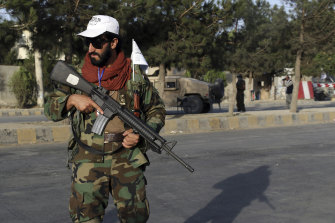 Taliban fighter stand guard at a checkpoint near the gate of Hamid Karzai international Airport in Kabul.Credit:

The Taliban condemned the strike.

“The Americans should have informed us (Taliban) before conducting the air strike, it was a clear attack on Afghan territory,” a Taliban spokesman told Reuters, adding that two women and a child were wounded in the attack.

The Taliban have said they have arrested some suspects involved in the airport blast.

Spokesman Zabihullah Mujahid also said the Taliban would take over the airport “very soon”, after US forces withdraw, and announce a full cabinet in the coming days.

Mujahid told Reuters the group had appointed governors and police chiefs in all but one of Afghanistan’s 34 provinces and would act to solve the country’s economic problems.

A US official told Reuters on Saturday there were fewer than 4,000 troops left at the airport, down from 5,800 at the peak of the evacuation mission. Pentagon spokesperson John Kirby later confirmed to reporters that the withdrawal had begun but declined to say how many service members remained.

The White House said the next few days were likely to be the most dangerous of the evacuation operation. US officials said another attack against the Kabul airport was a near certainty.

A US official said a reaper drone flown from the Middle East struck an Islamic State militant who was planning attacks and was in a car with an associate.

Residents of Jalalabad, the capital of Nangarhar, said they had heard several explosions around midnight and community elder Malik Adib said three people were killed and four were wounded in an air strike, adding that he had been summoned by the Taliban investigating the incident.

“Women and children are among the victims,” said Adib, though he did not have information about their identity. The US military statement said: “We know of no civilian casualties.”

On Saturday, the Pentagon released details of the 13 US service members killed in Thursday’s suicide bombing. Among them were 11 Marines, according to the Pentagon, plus one Navy hospital corpsman and one Army soldier.

They included a Marine and expectant father from Wyoming, Rylee McCollum. 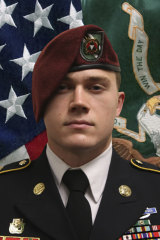 Roice McCollum, Rylee’s older sister, confirmed to the Casper Star-Tribune, that McCollum was expecting a baby in three weeks.

“He wanted to be a Marine his whole life and carried around his rifle in his diapers and cowboy boots,” McCollum’s sister told the Star-Tribune. “He was determined to be in infantry… Rylee wanted to be a history teacher and a wrestling coach when he finished serving his country. He’s a tough, kind, loving kid who made an impact on everyone he met. His joke and wit brought so much joy.”

Knauss had already served a nine-month deployment in Afghanistan. He grew up in Tennessee and joined the Army after graduating from Gibbs High School in Corryton, near Knoxville.

Initial reports said the slain Americans were all Marines with the exception of a Navy corpsman, making the news of his death “quite a shock” to his family, his grandmother Evelena Knauss told The Daily Beast.

“We were led to think that it was 12 Marines and one Navy, and we knew our grandson was in the Army,” Knauss said. “So we were praying for the families of the Marines, not knowing our grandson was one of the ones who lost his life… You just don’t think it will be yours.”