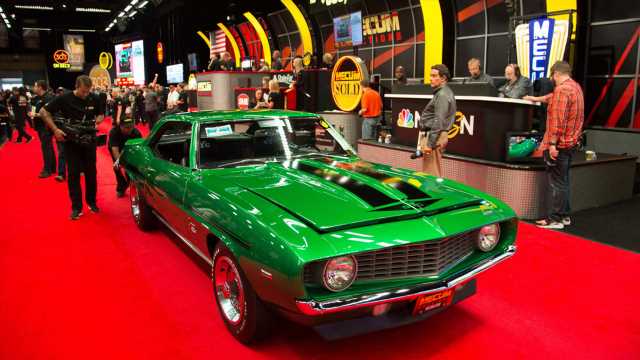 The Wisconsin-based Mecum Collector Car Auctions, the largest collector car auction company globally, has revealed the firm will now accept cryptocurrency payments through Bitpay. Mecum Auctions was invoked by a father and son duo Dana and Frank Mecum, alongside a number of Mecum family members.

In 2014, Dana Mecum and his son Frank also starred in a reality program that aired on NBCSN called “Mecum Dealmakers.” In the announcement sent to Bitcoin.com News, Mecum explains the firm is “welcoming in a whole new dimension to the live auction events” with its digital currency acceptance. According to the announcement, registered Mecum bidders can leverage cryptocurrency as a payment option via Bitpay. The settlement can be done in-person at the auction or online bidders can also pay with crypto in one of Mecum’s classic car auctions. By utilizing the Atlanta-based Bitpay, Mecum will accept five stablecoins (DAI, GUSD, USDC, PAX, BUSD) alongside BTC, BCH, WBTC, ETH, and DOGE.

“We recognize the growing acceptance of cryptocurrency for commerce and are confident that by accepting crypto for collector cars, it will widen our scope of influence and introduce the Mecum Experience to an entirely new audience,” Mecum Auctions Chief Operating Officer Sam Murtaugh explained in a press release statement.

Mecum further says that it will start accepting crypto payments at the 34th annual flagship event called “Dana Mecum’s Original Spring Classic” hosted in Indianapolis, Indiana. It will run through May 22 and feature 2,500 classic or collector cars, Mecum details.

“Mecum will be accepting cryptocurrency payments for purchases made at the Indianapolis auction and for all auctions moving forward,” the company’s statement notes. “Mecum’s website is updated daily with the latest consignments including detailed descriptions and photographs of the vehicles slated to cross the auction block.”