Home » Crypto » From now on, Ripple can be traded on Uphold [with zero fees for limited time]

Uphold, the former digital money platform known as BitReserve, issued a statement announcing to all its users that they have enabled the “card” to purchase Ripple among the funds with which they can trade.

“We are thrilled to announce that starting today Uphold members have access to buy and sell XRP right from their Uphold wallet. For a limited time and in celebration of this launch, Uphold is offering ZERO fees for the first 5M XRP purchased*.

This is another important milestone for our members and for Uphold as XRP is one of the fastest growing digital assets and the third most valuable cryptocurrency with a market cap of $24,838,048,184″.

In an email sent to their users, they mentioned that one of the main reasons they were encouraged to deal with Ripple Inc. in order to use their token on the Uphold platform, it was precisely because of a request from users to list new options for saving cryptos.

In order to list the most popular cryptocurrency they conducted a twitter poll, which Ripple won with an overwhelming majority of 51% (12,000 votes).  The other options were -in order of importance- Monero, Stellar and Cardano. 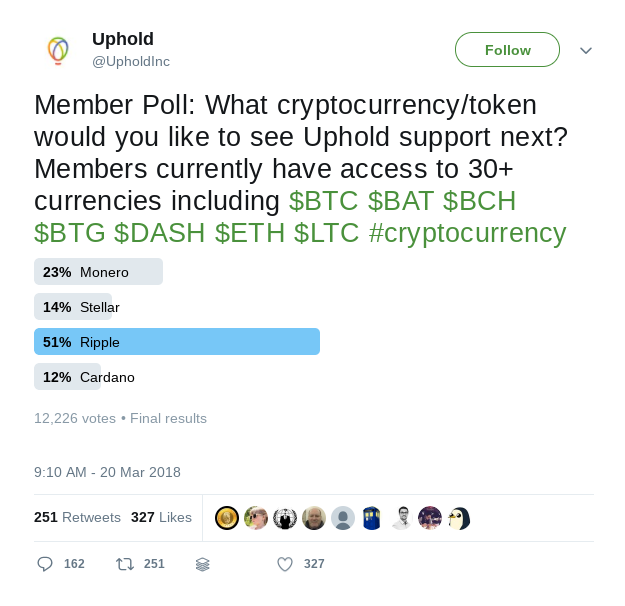 The team behind Ripple was also pleased with this new success towards the adoption of his token. Clearly, greater adoption of their token could lead to an increase in their share price thus diversifying Ripple’s horizons as a company almost exclusively associated with the banking sector:

“The XRP ecosystem is diversifying and growing rapidly,” said Miguel Vias, head of XRP markets at Ripple. “The listing of XRP on Uphold, a strong retail platform that offers customers easy access to digital assets, underscores the significant increase in demand for XRP.”

Another aspect to take into account is that to promote the use of Ripple, the first 5M XRP will be offered at no additional charge. A positive option for traders who want to keep their money in a relatively stable currency or for those who simply want to speculate through medium-term position trading.

The Great Delisting: Why Crypto Exchanges Are Dropping Assets