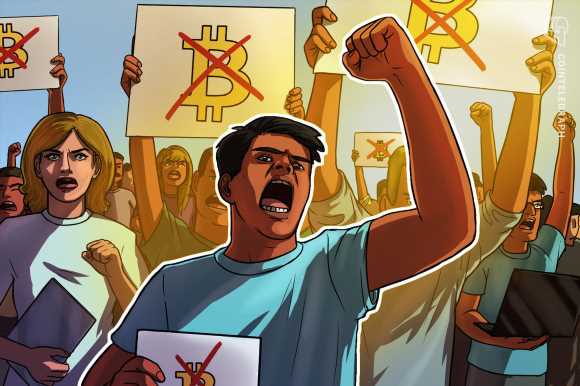 Amid El Salvador preparing to officially enforce the country’s Bitcoin (BTC) law in early September, Salvadorans took to the streets to protest over the adoption of BTC as an official currency.

The demonstrators — including retirees, veterans, disability pensioners, and workers — voiced their concerns over Bitcoin’s unstable price. The crowd was worried that the government would start paying their pensions in Bitcoin instead of the U.S. dollar.

“We know this coin fluctuates drastically. Its value changes from one second to another, and we will have no control over it,” a member of the Supreme Court of Justice’s workers’ union, Stanley Quinteros, reportedly said. El Salvadorans also expressed concerns over the lack of knowledge and understanding of the technology needed to use cryptocurrencies like Bitcoin. Protesters held up signs saying “We don’t want Bitcoin” and “No to corrupt money laundering.”

According to local reports, El Salvador’s latest anti-Bitcoin protests were apparently a part of a wider opposition campaign by local veterans protesting over low pensions on Aug. 27. As such, some protesters reportedly demanded a pension increase from $100 to $300.

As previously reported by Cointelegraph, Salvadoran president Nayib Bukele announced legislation to accept Bitcoin as legal tender alongside the U.S. dollar in early June. The bill later passed the nation’s Legislative Assembly and is scheduled to be enforced on Sept. 7. Last week, the president clarified that Salvadorans would be free not to use Bitcoin, stating:

“What if someone doesn’t want to use Bitcoin? Don’t download the Chivo app and continue living your normal life. Nobody is going to take your dollars. Someone can always queue up at Western Union and pay a commission.”