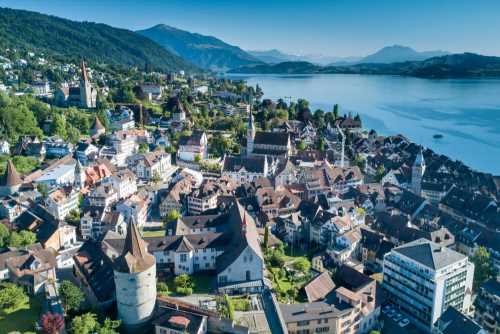 Switzerland is a country that’s doing all it can to aid bitcoin’s reputation. The nation is home to the town of Zug, which hosts what’s known as “Crypto Valley,” a region that takes part of its name from Silicon Valley in northern California.

Switzerland Is Doing All It Can for Crypto

While the latter is known for housing some of the world’s largest tech companies – such as Facebook, Google, and Microsoft – the former hosts several crypto and blockchain firms that are drawn to Switzerland thanks to its easy-going regulation and low taxes.

Now, Switzerland has a new division of its federal government working to ensure the crypto space moves in the right direction. Nino Landerer – head of capital markets and infrastructure at the State Secretariat for International Finance (SIF) – explained in a recent interview:

Much of the ecosystem you see flourishing – not just in Switzerland, but also abroad – is probably going against the initial idea of the crypto anarchists. [The original vision for bitcoin was] having a fully decentralized system where everyone manages his or her own keys and no one trusts anyone, but they can all verify everything. That was the basic idea in Nakamoto’s whitepaper, and some tech people believe in that fundamental philosophy, but that’s not the ecosystem we see. We see a rather centralized ecosystem. We see service providers like banks that are providing services to clients, and their clients trust the banks, not the DLT (distributed ledger technology that helps make blockchains secure). So, it’s really kind of building up a similar system to what we already have – just based on crypto assets.

Paolo Ardoino – chief technology officer at Tether, one of the world’s most well-known stable currencies – is one of many that seem to agree. Ardoino threw his two cents into the mix, commenting:

You need to be realistic. We need regulation and we need laws. You can be an anarchist when you are with a few of your friends, but if you’re living in a country and you want to build infrastructure, you cannot be an anarchist.

Switzerland has long sought to be a “crypto neutral” territory. When the space first began to experience huge bursts in popularity in 2017, the nation made several amendments to already-existing laws to allow for further innovation and growth in the space. Landerer says:

These legislative changes didn’t come out of the blue. It was around 2017 that they became more salient, and the government decided it needed to do something. Doing something doesn’t mean kill it, but embrace it to the extent that it can be useful while also making clear that it shouldn’t be the Wild West… [You want to] create a framework to enable innovative business models and financial services, but also account for the risks.

Podcast: What Harnessing the Bitcoin Blockchain’s Power Could Mean…

Bitcoin Price Offers Bullish Hope Ahead of the Weekend