Home » Crypto » Will Bitcoin Hit $20k in 2020? All Eyes on BTC as Consolidation Continues

As September draws to a close, Bitcoin continues its pattern of consolidation above $10,000–but what’s next?

This marks the eighth week in a row that Bitcoin has traded consistently above $10k, a pattern of consolidation that many analysts believe may eventually give way to a bull run later this year.

According to data from CoinMarketCap, the price of Bitcoin appears to be continuously holding steady above the $10,000 mark even though the token is trading at a slightly lower price today ($10,660) than it was a week ago ($10,930). Earlier this week, the price dipped as low as $10,220. 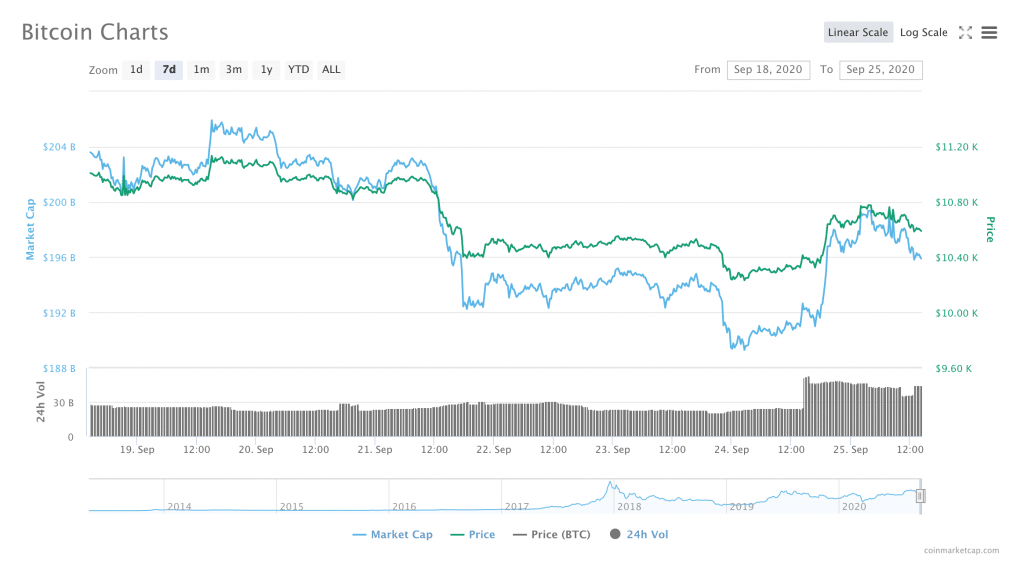 This is consistent with the price pattern for most of the month of September, which has stayed within the $10,000-$11,000 range since Friday, September 4th.

The lack of any major volatility in the price of Bitcoin in recent weeks may primarily benefit institutional traders that have access to microstrategy tools, while retail traders–who tend to buy and sell around bigger price events–may be hodling onto their coins for now.

Jack Choros, crypto commentator and content manager at Crypto Radar, told Finance Magnates that “any consolidation is a good thing for the next bull run.”

“Bitcoin, like gold, is inversely correlated to the dollar.”

But is another bull run feasible at this point? Perhaps–but there are many factors at play.

This week, a number of analysts are looking to the USD for clues as to what Bitcoin might do next: “since the black swan event of March 12, 2020, the price of bitcoin and the U.S. dollar currency index (DXY) have been moving inversely proportional to one another,” commented Peter Goodrich, CPA and tax manager at Prager Metis CPAs, to Finance Magnates.

Renowned broadcaster and finance analyst Max Keiser also noted this phenomenon, tweeting on Tuesday that “Bitcoin, like gold, is inversely correlated to the dollar.”

#Bitcoin, like Gild, is inversely correlated to the $USD – *not* the stock market.

Don’t be fooled by randomness https://t.co/UIbu7hiW5m

Case in point: for the past several weeks, “the DXY has been consolidating sideways as was the price of bitcoin,” Mr. Goodrich said.

Over the past few days, however, “the DXY has experienced an upward impulse, which has had a negative effect on the price of bitcoin.”

Indeed, for the last five days, the DXY has made an upward movement from roughly 92.89 to around 94.30, and appeared to be continuously moving upward at press time.

“There has been increased economic uncertainty as the pandemic continues to exacerbate the global financial crisis.”

However, while the dollar may be seeing a short-term recovery, the ongoing effects of the coronavirus and subsequent economic fallout on the global economy may keep driving the dollar down over the long term.

Juan Aja Aguinaco, co-founder of Shyft Network, told Finance Magnates that “there’s a large number of investors that use BTC as a hedge against fiat currency like the USD, and as a hedge against volatility in the gold and precious metals market. 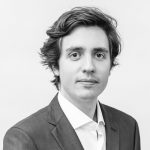 “This injection of money supply into the economy has decreased the value of fiat which has been a major catalyst for the increased interest in cryptocurrency which is reflected in the total market cap for the asset class,” Mr. Goodrich was continued.

Bitcoin could benefit from a long-term dollar dive: “Bitcoin was developed as a result of the 2008 financial crisis. The next major milestone for cryptocurrency is the much-needed regulatory clarity that would bring the asset class to the mainstream.”

This regulatory clarity may already be on the way: last week, two significant regulatory developments took place in the cryptocurrency industry in both the European Union and the United States.

Both of these developments had to do with standardizing regulations relevant to the crypto space: in the EU, a leaked draft of a new set of rules for the crypto industry from the European Commission known as the ‘Markets in Crypto-Assets’ (MiCA) was shared across the internet. In the US, the Conference of State Bank Supervisors (CSBS) announced the launch of MSB Networked Supervision, a standard set of compliance guidelines for large Money Service Businesses (MSBs) in the US.

The price of Bitcoin didn’t seem to have any kind of major reaction to either of these developments. However, increased regulatory clarity in the crypto space could pave the way for further crypto adoption later on–particularly for institutional investors.

Ciara Sun, head of global markets at Huobi Group, commented on institutional traders’ regulatory needs at a CoinTelegraph event in July: “larger institutions have higher compliance requirements, but regulatory agencies have not provided enough guidance on digital assets in the past.”

At the same time, however, the role of larger financial institutions may be headed for a reduction on a global scale.

This has to do with trust: earlier this month, the BBC reported that leaked documents involving about $2 trillion of transactions revealed how some of the world’s biggest banks have allowed criminals to move dirty money around the world.

“The leak further demonstrated that traditional financial institutions are not complying with existing anti-money laundering measures,” he said. Therefore, “challenger banks and other fintech startups, along with blockchain companies, have an opportunity in front of them: to show the world that they can do it better, and give users better products and services.”

However, there are a number of other factors that could expedite crypto adoption across the globe.

“Not to sound pessimistic, but the rest of the year looks as strange as the first half of 2020, perhaps more,” Juan Aja Aguinaco said to Finance Magnates. “We have what appears to be a second wave of the COVID-19 pandemic hitting countries with economies that were weakened by the effects of the first wave.”

Additionally, “one factor is the current political and social issues affecting the United States,” Mr. Aguianco explained. Traditionally speaking, “elections in the US are an important generator of volatility both in traditional and crypto markets.”

However, this election cycle may be even for significant for the global economy: drama around the 2020 US presidential election has also given way to “a wave of civil unrest in the US, which may hit its tipping point during and after the upcoming elections. Other countries around the world are also experiencing civil unrest and political changes (e.g.Belarus, Mexico, and Bolivia.)”

“All of these have considerable effects on traditional financial markets,” he continued. As such, “investors may start seeking better yields in non-traditional markets, like cryptocurrencies, and DeFi to be more specific.”

And indeed, the DeFi (decentralized finance) space did see a huge boom earlier this year. A number of tokens belonging to DeFi protocols consistently made headlines for sudden spikes in their price levels throughout the months of July and August.

However, September seems to have brought the DeFi space into a cooldown. Of 42 DeFi assets listed on crypto price data site Messari, only five had positive price movements over the last 30 days: Yearn.Finance, Uniswap, UMA, Cream, and Loopring.

CryptoRadar’s Jack Choros commented that while DeFi is indeed “cooling off a little bit,” projects “like Yearn have real value because the price of the token is actually connected to the amount of funds locked in by investors.”

In other words, the prices of some of these tokens aren’t driven purely by speculation: “the price of the coin is linked to actual value,” he said. “That’s a good sign for the fundamentals ofthe project.

Shyft Network’s Juan Aja Aguinaco said that part of the reason for the DeFi cooldown could be related to the relative stagnancy in the price of Bitcoin.

“Some investors shift capital between BTC and alternative tokens in search of better returns,” he said. “This battle-of-sorts between altcoins and Bitcoin represents a major influencing factor in their price.”

“Also, a large amount of capital has moved from BTC to DeFi tokens like DAI, COMP, or has parked BTC on WBTC for liquidity pools and yield farming, further reducing available capital and liquidity on the BTC market.”