Motorists are in for a long summer of soaring petrol prices that are now almost certain to hit $2 a litre before Christmas and remain at historically high levels until Easter.

The high cost of fuel, driven by a spike in international energy problems, is also adding to Australia’s supply chain crisis, and increased prices paid by trucking companies will soon be reflected in the cost of groceries and other goods. 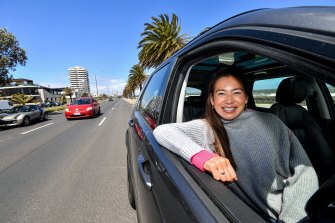 Kerstin Wahlqvist says she finds the rising petrol prices frustrating, but they will not stop her driving around the state this summer.Credit:Joe Armao

Average unleaded prices in Melbourne continued to ease on Friday to about $1.69 a litre, down from the all-time high of $1.78 they hit on October 19, according to monitoring website Motormouth.

Oil market expert Evan Lucas, head of strategy at InvestSmart, said the slight reprieve was likely to be shortlived.

Mr Lucas said a global oil shortage as production lagged surging demand in the US and Europe was driving international prices higher and delivering a “Christmas lump of coal” for Australian motorists.

“Two dollars a litre before the end of the year is almost a certainty,” Mr Lucas said.

With the Australian Competition and Consumer Commission monitoring petrol prices and with the power to act against “misleading or anti-competitive conduct” by retailers, Mr Lucas said gouging was not a factor in the price rises.

Mr Lucas warned that the global factors squeezing local prices were unlikely to be resolved before the Australian summer was out.

“Come about March or April next year, we’ll see some easing of the pressure …”

The two largest components of the bowser price are taxes charged by Australian governments – about 42 per cent on top of the 39 per cent paid to buy the unleaded product, with the price pegged to the going rate from Singapore’s vast refining operations, known as Mogas 95, and driven largely by the crude oil price.

The petrol companies must then pay to ship and store the fuel, incurring more wholesale costs before a retail margin – which averaged about 16¢ a litre in the past financial year – makes up the rest of the bowser price from which the company pays rent, wages and other business costs and draws a profit. 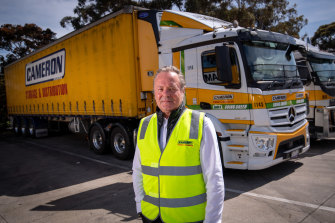 Melbourne-based haulier Glen Cameron is warning that soaring diesel prices will flow on to consumers.Credit:Eddie Jim

“Diesel fuel represents between 25 per cent to 35 per cent of your overall expense of running. Running a [road freight] business, it’s one of the top three along with labour and rent,” he said.

A pricing mechanism used by many in the industry allowed spikes in the diesel price to be claimed back from customers, Mr Anderson said.

But not all trucking operations used the mechanism and for those who did, it took time to recoup the extra costs.

“The consumer ends up paying for it in the long run … when they go to buy their groceries, they pay a little bit more,” Mr Cameron said.

Victoria’s leading motoring organisation, the RACV, said it did not speculate on future fuel prices. Head of communications and engagement Andrew Scannell said there were too many volatile factors at play.

“Motorists can shop around for the best deal by using the Fuel Tracker on the RACV website or in the arevo journey-planning app,” Mr Scannell said.

Middle Park mother of two Kerstin Wahlqvist said she found the rising prices frustrating, but they would not stop her driving around the state this summer.

“It’s been a difficult year; it’s been tough financially,” she said. “So coming out of that, thinking about rising petrol prices, it’s difficult.

“But at the same time, I try not to think that too much, and just think, ‘Oh, well, it is what it is,’ because I want to get away and take the kids away. So, you kind of just grin and bear it.”

Trump lashes out at whistleblower, who Schiff says is expected to testify ‘very soon’