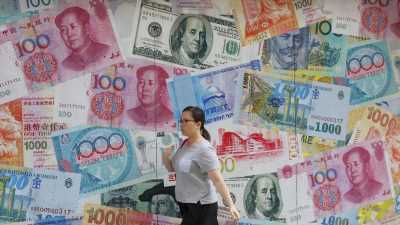 Unprecedented trade surpluses and record inflows into its bond market are giving China a stockpile of dollars unseen since the days when the “Asian savings glut” was blamed for keeping US interest rates excessively low and fuelling the sub-prime mortgage crisis.

But unlike then, when China aggressively recycled its dollar holdings into US Treasuries, China’s giant pile of foreign exchange reserves are holding broadly stable. That means the dollars are being funnelled somewhere else, but exactly where is proving to be a bit of a mystery. 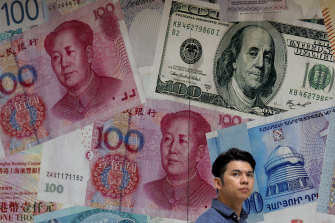 The surplus of US dollars offers China an important cushion against any future shocks in the world economy.Credit:AP

While some of that flood of greenbacks is ending up as deposits at Chinese banks, the large “errors and omissions” in the nation’s balance of payments is muddying the picture. What is clear is that the dollars offer China an important cushion against any future shocks in the world economy, even as individual companies like China Evergrande struggle to repay their debts.

“It is exceedingly difficult to get a clear view of how China’s current account surplus is recycled,” said Alvin Tan, head of Asia foreign exchange strategy at RBC Capital Markets in Hong Kong. Nonetheless, the dollars mean that “whatever China’s economic challenges ahead, there is little danger of either a balance-of-payments or a foreign-debt problem.”

Foreign currency bank deposits are just shy of a record $US1 trillion ($1.4 trillion), while the trade surplus in the first nine months of this year hit about $US440 billion compared with the 2015-2019 average of $US336 billion and 2020’s $US325 billion, according to Morgan Stanley estimates.

At the same time, an aggressive COVID-zero policy has shuttered the nation’s borders and kept millions of Chinese tourists, and their savings, at home.

Some analysts argue that the booming current account has allowed China’s policy makers to rein in massive amounts of debt and begin a long-awaited campaign to deleverage its troubled real estate sector this year. But that leaves a question as to whether America’s demand for goods will keep up enough momentum to offset the effects of China’s slower credit growth.

“Chinese macro policy has become a big bet on US growth as it attempted to replace its credit impulse via the current account,” Jon Turek of JST Advisors wrote in recent research. “China tightened credit while the external-account surplus blew out. This allowed China to import the aggregate demand that it was ‘sacrificing’ from reducing credit growth.”

The State Administration of Foreign Exchange released balance of payments data for the third quarter on Friday. They suggested “the fastest reserve accumulation since early 2014,” Goldman Sachs analysts wrote. That’s one outlet for the surfeit of dollars, though official reserves as of September were less than at the start of the year.

Economists forecast China will notch yet another trade surplus when it releases data for October on Sunday, this time to the tune of about $US64 billion. 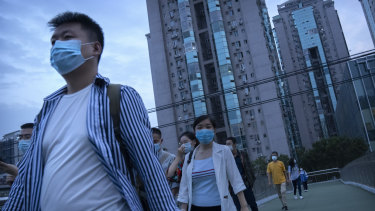 An aggressive COVID-zero policy has shuttered the nation’s borders and kept millions of Chinese tourists, and their savings, at home.Credit:AP

China’s current account – a measure of trade and investment – slipped into negative territory in the first quarter of 2018 for the first time since it joined the WTO in 2001, raising questions about what that meant for the flow of capital around the world. It sank into the red again in the first quarter of last year, when coronavirus restrictions shuttered factories, but has since rebounded as China’s export engines revved back to full speed.

One consequence of the dollar influx is the yuan’s ongoing strength – it has been the best performing currency in Asia this year against the dollar. But that isn’t enough to explain what’s happening to all those greenbacks.

One possibility is that companies have left a large slice of their foreign trade receipts overseas, said Becky Liu, Standard Chartered’s head of China macro strategy.

“This means the increased foreign currency holdings are primarily held by the private sector, rather than the public sector,” she said.

The retention of rising foreign currency assets by Chinese private sector entities, rather than their flowing to the public sector, will help reduce market volatility and prepare China for a further opening up of its capital account, she said.

“It is exceedingly difficult to get a clear view of how China’s current account surplus is recycled.”

Huang Yiping, a former member of the People’s Bank of China’s monetary policy committee, said in an interview with Bloomberg Television that the current account surplus will likely recede from these lofty levels as exports soften over time.

“This large current account surplus I think is abnormal,” he said. “Once the pandemic is over, we should expect some normalisation of these numbers.”

Yet for now at least, the dollars keep arriving.

Goldman Sachs estimated net inflows of around $US14 billion for September, well above the $US5.5 billion recorded in August, boosted by both the goods trade surplus and foreigners buying more Chinese bonds.

Analysis by Stephen Jen, who runs Eurizon SLJ Capital, a hedge fund and advisory firm in London, shows the run rate of China’s trade surplus is approaching $US600 billion a year, which if sustained would become the second highest. The balance of payments is as flush since a record in 2007, he notes.

Other theories on where the dollars are being recycled include Chinese companies investing overseas or using the cash to fund projects such as those tied to the Belt and Road Initiative.

“The pandemic has created huge distortions in the world, one of which is an extremely large trade surplus in China,” Jen wrote in a note. “Long-COVID should mean that such a flattered trade surplus should take time to fade.”