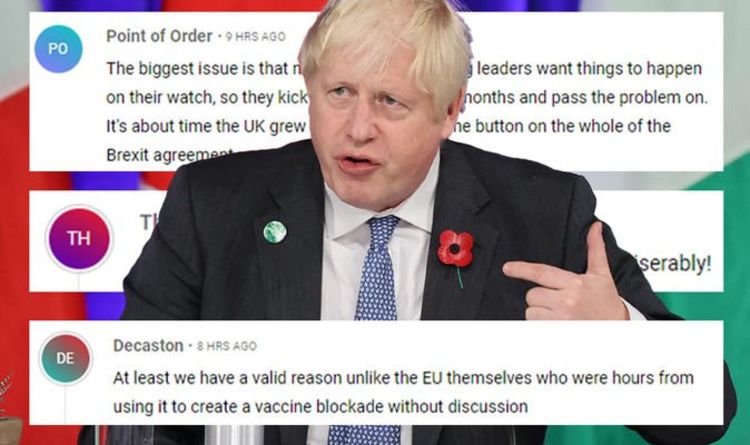 Brexit: EU aiming to 'cause pain' through reprisals says expert

With the EU refusing to budge on renegotiating the Northern Ireland protocol, Britons have called on the Prime Minister to take action and unilaterally suspend parts of the Brexit deal. There were reports the EU was preparing a raft of retaliatory measures to hit back if the UK triggers Article 16. But officials and EU diplomats denied the claims, clearing the way for Lord Frost to enact the legislation.

Reacting to the news, Express.co.uk readers insisted the country “is crying out” for the Prime Minister and Lord Frost to take action.

One reader MI7 said: “The whole country is crying out for Boris Johnson to trigger article sixteen, let’s get it done.”

Decaston added: “At least we have a valid reason unlike the EU themselves who were hours from using it to create a vaccine blockade without discussion.”

One reader, named Point of Order said: “The biggest issue is that none of the EU revolving leaders want things to happen on their watch, so they kick things around for 6 months and pass the problem on.

“It’s about time the UK grew a pair and pushed the button on the whole of the Brexit agreement.”

TheRicardo added: “The WA was a test for the EU, and they have failed miserably!”

Article 16 of the Northern Ireland protocol can be used if the agreement has led to serious, economic and or environmental difficulties.

The Government has warned the protocol in its current form has caused serious issues to trade in Northern Ireland.

Indeed, Lord Frost held talks with Maros Sefcovic last week where he once again spoke of those issues and claimed using Article 16 remains “on the table”.

Lord Frost will meet his EU counterpart on Friday for further discussions concerning the protocol after talks earlier this week.

Ahead of that meeting, Lord Frost made a statement to the House of Lords where he underlined the UK’s threat to use Article 16.

He said: “I gently suggest that our European friends stay calm and keep things in proportion.

“They might remind themselves that no government and no country has a greater ability in stability and security in Northern Ireland and the Belfast Good Friday agreement than this government.

“At that point, of course, we would be entitled to come to our own judgments about how much value we could attach to their commitments supporting the peace process and the best interests of the people of Northern Ireland, as against protecting their own interests.

“We have been abundantly clear about this since July, when we made clear that the test for using Article 16 had been already passed.

“Nothing that has happened since has changed that.”

The EU has claimed it is drawing up retaliatory measures if the UK were to trigger Article 16.

In a warning to the UK, deputy prime minister of Ireland, Leo Varadkar claimed Britain could be about to make a “big mistake”.

He said: “I think that would be a big mistake.

“The uncertainty that was created by Brexit went on for years.

“I’d hate us to be talking again about a no-deal Brexit or a cliff edge, or any of those terms that we’d forgotten and almost stopped using.”

Georgia Releases List Of Nearly 315,000 Voters Set To Be Removed From Rolls