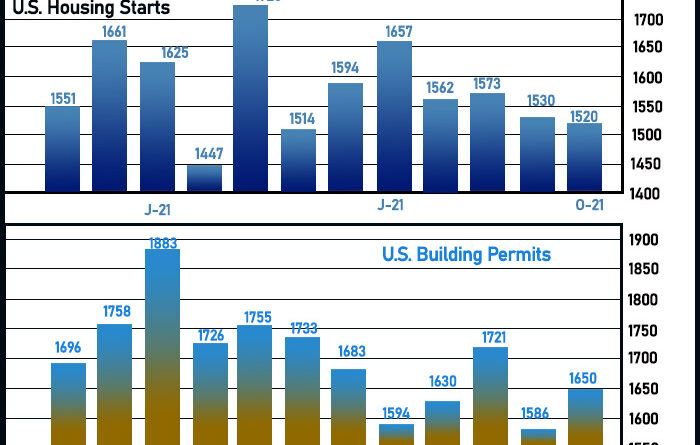 The Commerce Department released a report on Wednesday showing an unexpected decrease in new residential construction in the U.S. in the month of October, although the report also showed a bigger than expected spike in building permits.

The continued decline came as a surprise to economists, who had expected housing starts to jump 1.6 percent to an annual rate of 1.580 million from the 1.555 million originally reported for the previous month.

The unexpected drop in housing starts came as single-family starts plunged by 3.9 percent to an annual rate of 1.039 million, more than offsetting a 7.1 percent surge in multi-family starts to a rate of 481,000.

Meanwhile, the Commerce Department said building permits spiked by 4.0 percent to an annual rate of 1.650 million in October after plummeting by 7.8 percent to a revised rate of 1.586 million in September.

Building permits, an indicator of future housing demand, had been expected to shoot up by 3.2 percent to an annual rate of 1.640 million from the 1.589 million originally reported for the previous month.

She added, “An elevated backlog of starts will also keep a floor under housing starts, although the pace of activity will continue to be tempered by supply chain snags and difficulty finding qualified workers.”

Despite another monthly decrease, the annual rate of housing starts in October was up by 0.4 percent compared to the same month a year ago. Building permits were up by 3.4 percent year-over-year.

The National Association of Home Builders released a separate report on Tuesday unexpectedly showing a continued improvement in U.S. homebuilder confidence in the month of November.

The report showed the NAHB/Wells Fargo Housing Market Index rose for the third straight month, climbing to 83 in November from 80 in October. The increase surprised economists, who had expected the index to come in unchanged.

The five best ways to trim your Christmas costs