Stratis, the Blockchain-as-a-Service platform that provides C# developers with several tools to build their own blockchains, recently announced their roadmap objectives for the first two quarters of 2018. This accompanies a flurry of partnerships that has ramped up since the beginning of the year, including those with C# Corner, Gluon, and Beyond Global Trade (BGT).

So far, two verified ICOs—Gluon and BGT—have been created as a result of the Stratis platform, potentially paving the way for many businesses to easily launch their own ICOs.

This article will examine their recently updated roadmap. Let’s begin with a quick summary of last year’s achievements. If you’d like an in-depth introduction to the project, check out our Stratis guide.

Much of Q4 2017 was spent pushing towards beta releases. Stratis has, for the most part, met their roadmap deadlines, with a few delays occurring due to security double-checks. The following is a brief recap of their progress last year:

The first step towards implementing a C#-built blockchain network, this allowed users to run a full node with all capabilities and GUI support. Stratis hit their deadline for this. This milestone enabled users to stake coins, download the Stratis blockchain, and aided peer propagation. This was a major development in the project.

In Q3 2017, Stratis developed the alpha version of the Breeze wallet on Bitcoin’s testnet. It had been delayed slightly, because the team had discovered a serious bug in testing. This did not seem to faze the community greatly, who were to happy that solid reviews were taking place.

This progressed to a beta version that supported both Bitcoin and Stratis testnets in Q4 that, by the end of the year, had developed into a fully functioning wallet.

In a very exciting development that is key to Stratis’ success, the team created the mechanism by which custom blockchains could be developed, called Blockchain Generation Technology.

Announced in December 2017, this feature lets teams deploy their very own blockchain, public or private, that includes wallets, mining capabilities and full node infrastructure— all using C#. Thus, it is now possible for developers to create their very own coin.

The use of blockchain to securely store personal information—digital identities—is universally agreed to be a major application of the technology. Stratis had already created the Stratis Identity app for the Android Operating System and the last quarter of 2017 saw them work on one for iOS. This app lets you write your digital identity onto the Stratis blockchain.

The iOS has finished development, but is still waiting to be approved by the App Store.

While the specific material for the courses is still in the works, Stratis has completed the overall architecture that is the Learning Management System. This is the system by which course material is disseminated, evaluated, and recorded. It lays the groundwork for the creation of content. The team has expressed confidence in delivering the content on or before their deadline of Q1 2018.

Given that one of the key use cases of Stratis is to let developers launch their own ICOs, the launch of a Test ICO platform was a significant milestone for Stratis. This let users host their own ICOs on the Stratis blockchain, and the platform was built with C# and the .NET framework. It was deployed on Microsoft’s Azure cloud infrastructure.

There’s a lot more on the table in 2018 as Stratis will be taking many of their key developments into Mainnet Beta.

Their priorities for the first half of 2018 include: 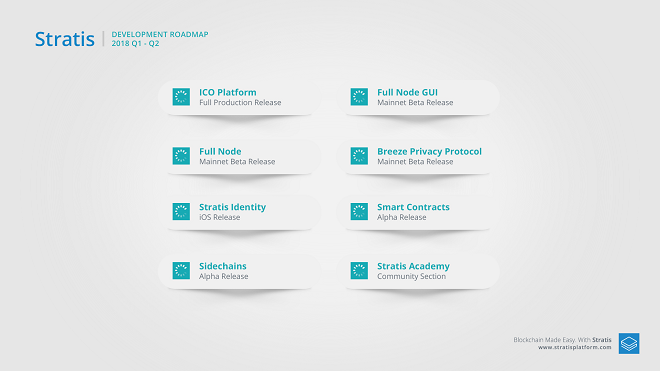 Earlier this year, Silicon Valley software company Gluon, which brings intelligent solutions to the automotive market, announced that they would work with Stratis to become a flagship ICO that would launch using Stratis’ platform. Soon after, Beyond Global Trade, which operates in the manufacturing and design space, became the second flagship ICO to be launched on the Stratis blockchain.

This feature is expected to be ready in Q1 2018. This final release will build on the feedback received during the Test ICO platform run. No new wallet will be necessary. When this feature is fully ready, it can be launched directly from the Azure marketplace, without requiring assistance from the Stratis team.

The Full Node Mainnet release will take the feedback from the alpha release and incorporate it into the beta release. It is currently in a testing phase. While unconfirmed by Stratis itself, some sources indicate that it is expected to be released in Q2 2018. The development of the Full Node is accompanied by an improvement to the UI experience.

Privacy is a hot topic in cryptocurrency and Stratis’ decision to incorporate privacy features should please many. In Q4 2017, it went through internal testing phases. Q1 2018 will see the Mainnet Beta release of this protocol embedded into the multi-currency Breeze wallet.

In order to entice users onto private and public blockchains built by developers, something must be built. To build something, especially in a field as nascent as blockchain technology, developers must be educated in the particulars and the use of the programming language—in this case, C#.

To help usher in this new era of information sharing and processing, individuals must be educated in the subject, like how developers were educated at the dawn of the internet. Stratis’s partnership with C# Corner, a millions-strong developer community, will help build this ecosystem.

Course material is actively being prepared and will be released during the first two quarters of 2018.

Expected to be released in Q1 2018, the smart contracts compatibility with the Stratis platform is an anticipated feature. The team has already put the architecture in place. In Q4 2017, they were working on gas expenditure and persistent storage related elements.

There’s good news: Stratis is slated to introduce this new form of smart contracts, which developers can readily use, at a Blockchain Expo in London on April 18, 2018. It will be hosted by Jordan Andrews, a smart contracts developer for Stratis.

Sidechains are a core element of the Stratis objective to offer a fully functional and end-to-end blockchain development platform. This will combine with the smart contracts release to allow developers to run smart contracts on sidechains. This release will let developers create sidechains instantaneously and allow funding from the mainchain. This is also expected to be released in Q1 2018.

Keep an Eye on Stratis

With Q1 2018 coming up soon, we can expect to hear more from Stratis in the coming weeks as some of the items on the roadmap reach their deadlines for completion. The first half of 2018 will see the implementation of many critical aspects of their objectives, giving us a better indication of how useful their project will be, how well it will be received, and how common it might become in blockchain development.

BitMEX Cryptocurrency Exchange Holds 0.18% of All Bitcoins in Circulation