AMP chief executive Franceso De Ferrari has publicly apologised to Julia Szlakowski, a former employee at the centre of a sexual harassment scandal, as he vowed to tackle the company's cultural problems.

Mr De Ferrari on Thursday faced a parliamentary grilling after a tumultuous period for AMP, including the sudden exit last month of former chairman David Murray, after an investor backlash over its handling of a sexual harassment complaint against executive Boe Parahi. 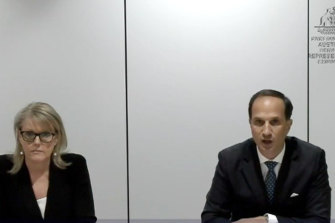 Earlier this year, AMP had promoted Mr Pahari after the company penalised him following a sexual harassment complaint against him by Ms Szlakowski from 2017. It demoted Mr Pahari last month as Mr Murray stepped down.

Mr De Ferrari on Thursday defended AMP's investigation into the matter in 2017, which was carried out by a QC, and also said the company did not have a systemic problem with misconduct.

"Let me start by apologising to Ms Szlakowski, to our wider employees and to our clients for the distress caused by these events over the last period. We have always taken this matter very seriously," Mr De Ferrari told the House of Representatives economics committee.

Mr De Ferrari said the past few months had been "some of the most challenging for me," and as CEO he was responsible for setting the culture and he took this responsibility seriously.

"Where harassment occurs, including sexual harassment, I am determined to take action to address the problem. Misconduct of any kind is not acceptable at AMP."

"Based on the data I’ve seen, I do not believe misconduct is a systemic issue within our business. However, I am committed to driving a program of initiatives to build a more diverse, inclusive and respectful culture."

Mr De Ferrari told the committee he was determined to take action, pointing to a review being carried out into workplace conduct; a taskforce on inclusion; a board-directed cultural working group and a revamp of its procedures for whistleblowers.

As AMP tries to rebuild its damaged reputation, after also facing harsh criticism at the Hayne royal commission, Mr De Ferrari said improving parts of its culture was his "absolute priority".

Chair of the committee, Liberal MP Tim Wilson, launched the questioning by saying the series of problems at AMP were "clearly all linked to the culture of the organisation," asking: "What the hell is going on over at AMP?"

Mr De Ferrari replied that in the 18 months since he started as CEO, the company had been on a "pretty profound transformation journey" that included fixing its business model and improving its culture.

Mr De Ferrari also defended its approach to buying out aligned financial planners, an issue that has sparked a class action from aggrieved planners. Mr De Ferrari said the higher valuations it previously offered were not sustainable.

Start the day with major stories, exclusive coverage and expert opinion from our leading business journalists delivered to your inbox. Sign up for the Herald‘s here and The Age‘s here.

A concise wrap of the day on the markets, breaking business news and expert opinion delivered to your inbox each afternoon. Sign up for the Herald‘s here and The Age‘s here.