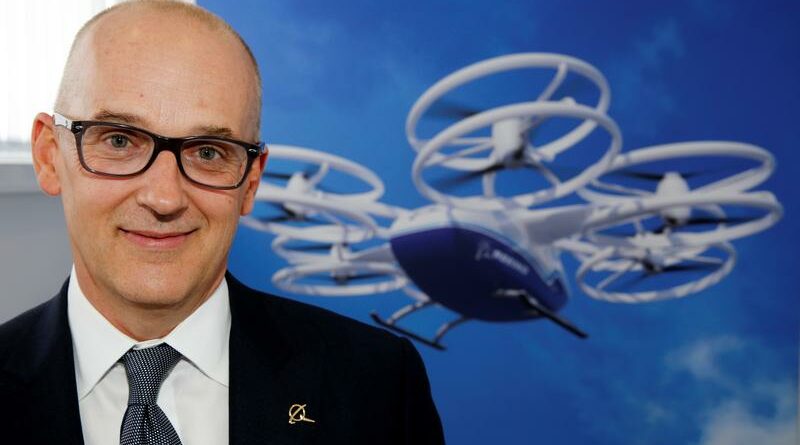 (Reuters) -Boeing Co announced the retirement of its finance chief for the past decade, Greg Smith, sending its shares down as the unexpected departure rattled investors while the crisis-hit jetmaker signaled stability by prolonging its chief executive.

Boeing extended the company’s standard age-65 retirement to age 70 to allow CEO Dave Calhoun to serve in the top job, a vote of confidence and a play for continuity as the U.S. planemaker battles to recover from the coronavirus and 737 MAX crises.

But shares faltered as investors focused on the surprise retirement of Smith, 54, the face of the planemaker to financial markets during one of the most turbulent periods in its history, marked by a safety crisis followed by rising debts from the pandemic.

Calhoun later told shareholders at its annual meeting the company would be cash-flow positive in the near or medium term, and has a first priority of paying down its debt as travel markets and plane demand rebound. Boeing is seeing some signs of recovery in the single-aisle market.

Greg Smith, a 30-year Boeing veteran set to retire in July, led the largest bond offering in the company’s history and has been leading a business transformation that includes cost-cutting and shuffling resources to help Boeing emerge stronger once the COVID-19 and 737 MAX crises ebb.

Smith was seen by many in the industry as a future Boeing CEO when the company was riding high on record production and stock prices until 2019. But his policy of carrying out regular share buybacks was criticized by some in the company for leaving Boeing without enough in reserve to tackle the recent severe downturn.

That said, Smith faced the unprecedented task of handling two unprecedented overlapping crises – the collapse of income surrounding the lengthy grounding of the 737 MAX after fatal crashes and the global pandemic which inflicted pain on aviation companies globally.

Smith decided on his own to retire, two people familiar with his thinking said.

Prior to becoming CFO, he was corporate controller and vice president of Finance. In that role he served as Boeing’s principal liaison with the board of directors’ audit committee on regulatory compliance.

Calhoun, a former executive at Blackstone private equity group and experienced corporate crisis manager and a Boeing board member 2009, was named CEO in December after the board ousted Dennis Muilenburg.

That came after Calhoun was named chairman in October 2019. He gave up the chairmanship when he became CEO.

Calhoun told employees in January he sees “opportunities to be better. Much better.”

In January, the board approved a $1.4 million annual salary for Calhoun and long-term compensation of $26.5 million if he achieves several milestones.

A Short Treasury Bond ETF To Investigate Amid Rising Volatility