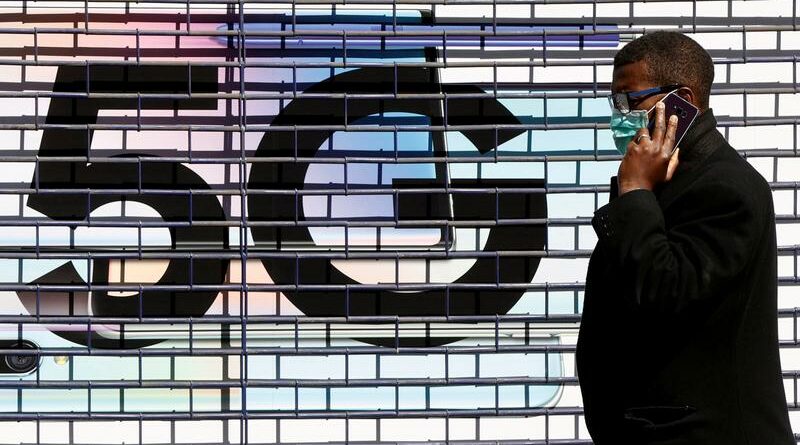 LONDON (Reuters) – Britain said on Wednesday it had auctioned airwaves to support 5G mobile for a total 1.36 billion pounds ($1.89 billion), with all four major networks winning new spectrum to improve their networks.

FILE PHOTO: A man wearing a mask walks past a 5G advert as the spread of the coronavirus disease (COVID-19) continues, London, Britain, April 14, 2020. REUTERS/John Sibley

A total of 200 MHz of spectrum was sold, split across the 700 MHz band ideal for providing wide area coverage including in the countryside, and the 3.6-3.8 GHz band, the primary airwaves for 5G that can carry lots of data-hungry connections.

All networks said they were pleased with the result.

Marc Allera, CEO of BT’s Consumer Business, said the outcome was “great news for our network, our customers and BT”.

Vodafone was been successful in the 3.6 GHz band, said UK Chief Executive Ahmed Essam, adding that it had avoided buying low band spectrum, where its strategy was to refarm its 900 MHz holdings to carry 5G traffic.

Three said it had tripled its low frequency spectrum, which Chief Executive Robert Finnegan said would transform its customers’ experience indoors and in rural areas.

The auction now moves to the assignment stage, whereby companies can bid for the positions they prefer within the airwaves they have won.

Why Investors Should Look for Companies With Many Ways to Win