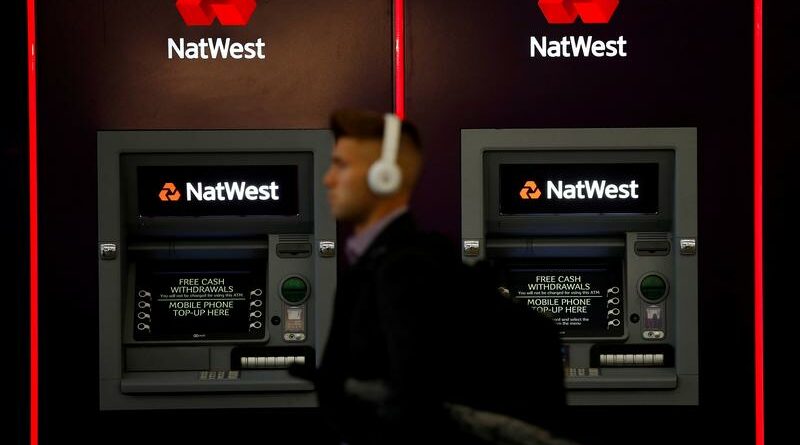 FILE PHOTO: A man walks past ATM machines at branch of the NatWest bank in Manchester, Britain September 21, 2017. REUTERS/Phil Noble

LONDON (Reuters) -Britain’s government on Thursday unveiled a blueprint for returning NatWest to majority private ownership within a year, more than a decade since bailing out the lender at the height of the global financial crisis.

The finance ministry said it had instructed Morgan Stanley to sell NatWest shares on its behalf in a scheme starting on Aug. 12 and running until Aug. 11, 2022.

NatWest shares have rallied 23% since the start of the year, supported by the recovery from the pandemic. But they are still far below the 502-pence level of the 2008 taxpayer rescue, making further substantial losses on the bailout likely.

The British state currently owns around 54.7% of NatWest after spending 45 billion pounds ($61.87 billion) bailing out the lender 13 years ago.

The government said it planned to sell up to 15% of the total volume of NatWest shares being traded on the market over the duration of the plan.

That would roughly equate to around 2 billion pounds, or 8.8% of shares, based on the last three month of trading volume, analysts at Credit Suisse estimated in a note.

Morgan Stanley will only sell shares at or above a price per share that the government has determined “delivers value for money for the taxpayer”.

“This move will be welcomed by investors and should improve liquidity in the stock as well as reinforcing the government’s desire to reduce/exit its shareholding, even if the plan weighs on the share price over the next 12 months,” said Ronan Dunphy, banking analyst at Goodbody.

“If the market is judged to be able to digest the sell down without an uncomfortable price reaction, we wouldn’t be surprised to see (the government) seek to reduce its shareholding further.”

NatWest CEO Alison Rose welcomed the government’s plan and said it showed the bank was on a better footing.

The plan to sell shares on the open market also opens the door to NatWest buying back up to 10% of its shares.

Details of the share sale come after the government sold 1.1 billion pounds worth of NatWest shares through a one-off stock offering in May.

NatWest also bought a similar chunk of stock directly from the government in March, but is prevented from launching another directed buyback for 12 months under company rules restricting it to buying around 5% of its stock through this route.

The government said it may also sell NatWest shares through other means such as accelerated bookbuilds or directing share buybacks.

Food Prices Plunge Most Since 2015 as Economy Nosedives