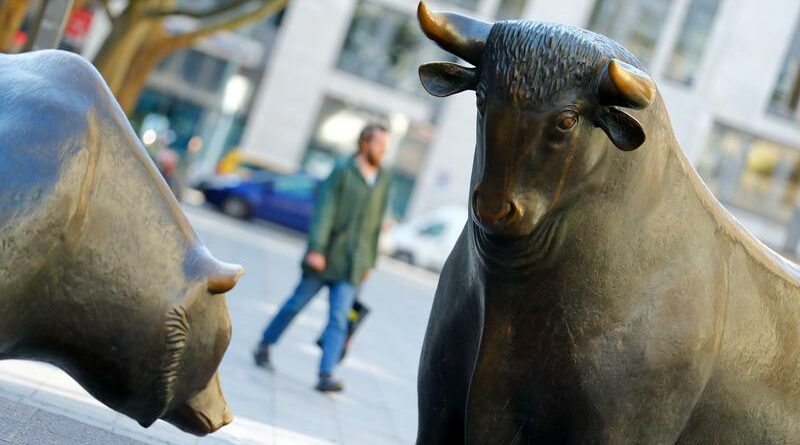 (Reuters) -European stocks were on track for their strongest weekly gains since November on Friday, with Germany’s DAX hitting a record high on the back of better-than-expected economic data and encouraging earnings updates from chipmakers.

FILE PHOTO: Bull and bear symbols for successful and bad trading are seen in front of the German stock exchange (Deutsche Boerse) as markets react to the coronavirus disease (COVID-19) in Frankfurt, Germany, March 25, 2020. REUTERS/Ralph Orlowski

The pan-European STOXX 600 index rose 0.6% and was set to end the first week of 2021 with gains of about 3%, largely driven by hopes that a Democrat sweep of the U.S. Senate would lead to a large U.S. fiscal stimulus package.

That, along with optimism that the rollout of coronavirus vaccines will fuel a strong global recovery, boosted U.S. and Asian markets to all-time highs. Europe’s STOXX 600 trades nearly 5% below its record high hit in February 2020.

“Germany is the powerhouse in Europe. If you get data out with value, especially at these uncertain times, that is going to push prices up and that seems to be what is happening now,” ETX Capital analyst Michael Baker said.

A European Commission monthly survey showed the economic sentiment in the euro zone ticked up in December, but inflation held in negative territory, lending weight to expectations of loose monetary policy in the bloc.

Franco-Italian chipmaker STMicroelectronics rose 4.3% after its revenue estimate for the fourth quarter came in above the previous range.

Travel stocks got a boost after French catering and food services group Sodexo raised its margin outlook for the first-half of 2021. Its shares surged 6.7% to the top of STOXX 600, while peer Compass gained 3.1%.

Economically sensitive sectors such as miners, oil and gas, and banks were mixed after strong gains this week.

UK’s FTSE 100, also heavy on bank and commodity stocks, rose just 0.1% after a 6% surge this week. Retailer Marks & Spencer slipped 1.4% after it reported another big fall in sales of clothing and homewares in the three months leading up to Christmas.

Swiss bank Credit Suisse fell 3.1% after it forecast a net loss for its fourth quarter due to higher provisions for a long-running dispute in the United States.