Tyro chief executive Robbie Cooke has called for all state premiers to fully reopen domestic borders once 70 per cent of the national population is vaccinated, saying the quest for zero COVID-19 cases was unsustainable.

ASX-listed Tyro is the largest provider of Eftpos terminals outside the big four banks, now owning 30 per cent of payment terminals in Australia. The bulk of its clients work in retail and hospitality and Mr Cooke said it was “extraordinarily important” for these industries to have a cohesive reopening plan. 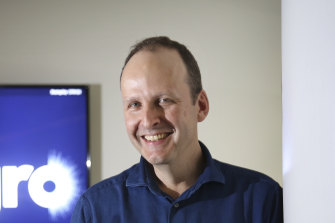 “I’m a Queenslander, but I do not think it’s a sensible nor sustainable proposition to have the state borders locked down,” Mr Cooke said.

“Once all jurisdictions get to 70 per cent [vaccination], governments across the country need to act in a coordinated way. It is exceptionally damaging for businesses if Queensland is locked down and the rest opens up, it does not make sense. It’s going to be damaging for Queensland businesses.”

Mr Cooke said many of Tyro’s clients had adapted to remain open during lockdowns but called for greater clarity from the federal government around vaccine passports and mandatory jabs to allow the country to reopen once vaccination targets are met.

“The government has to give businesses certainty around what they need to do and how they need to open themselves back up,” he said. “It has to come from government.”

While Mr Cooke praised the federal government’s handling of the first half of the pandemic, where JobKeeper wage subsidies “kept small businesses up and running” he was critical of the vaccine rollout, which has been plagued by supply constraints and hesitancy.

“We really did drop the ball with the approach to getting vaccines happening as quickly as possible,” Mr Cooke said

Tyro finalised a partnership with Bendigo and Adelaide Bank in June that boosted the number of its payment terminals by around 40 per cent. Bendigo business bank executive Bruce Speirs echoed Mr Cooke’s sentiment in saying small businesses were “frustrated” by the lack of coordinated public messaging.

“Part of the challenge is we have such different conversations happening in Victoria, NSW, compared to Western Australia, Queensland,” he said.

Mr Speirs said JobKeeper had helped small businesses to build capital buffers to survive the latest lockdowns across Victoria and NSW, but added clarity was needed on the “path forward”.

“In most businesses you can see balance sheet strength is still very evident,” he said. “Stepping forward, there is a degree of nervousness there. People are looking for that bridge to the other side of what this will look like.”

“It works both ways,” he said. “The dispersed nature of the workforce has been accelerated as a result of COVID and that has flow on impacts for the regions.”

However, Mr Speirs called for greater collaboration between the private and public sectors to ensure these “tailwinds” translate into long-term prosperity for small businesses in the regions. “We need the government, corporate and banking landscapes in concert to best enable that,” he said. “There’s clearly a role to make sure we don’t choke credit into the system when it’s most needed.”