To say that hedge fund and mutual fund managers tend to follow the herd is an incredible understatement and always has been. While publicly they sometimes seem reluctant to discuss their holdings, especially stocks they short, the reality is that managers tend to talk among themselves, as they run in the same circles. Often those discussions are centered around their portfolios and what is in them.

One sector that continues to draw a ton of fund manager interest is health care, and with good reason. In a frothy and seemingly still fully valued market like we are in now, combined with a witches’ brew of war in Ukraine, rising interest rates and the worst inflation in 40 years, the sector offers some stability for worried investors.

In a March 2022 global fund managers survey, over 30% of managers have piled into health care, so we screened the sector for the highest dividend-paying companies that were rated Buy at top firms on Wall Street. We found eight that look very attractive now. It is important to remember that no single analyst report should be used as a sole basis for any buying or selling decision.

This is a top pharmaceutical stock pick across Wall Street. AbbVie Inc. (NYSE: ABBV) is a global, research-based biopharmaceutical company formed in 2013 following separation from Abbott Laboratories. The company develops and markets drugs in areas such as immunology, virology, renal disease, dyslipidemia and neuroscience.

One of the biggest concerns with AbbVie is what might happen eventually with anti-inflammatory therapy Humira, which has some of the largest sales for a drug ever recorded. The company was concerned, so in June of 2019 it announced that it has agreed to pay $63 billion for rival drugmaker Allergan, the latest merger in an industry in which some of the biggest companies have been willing to pay a high price to resolve questions about their future growth. The purchase officially closed in May of last year.

AbbVie may be nearing the limits of how far it can boost Humira’s price as cheaper competitors come to market, a problem Allergan is already grappling with as more alternatives to Botox emerge. 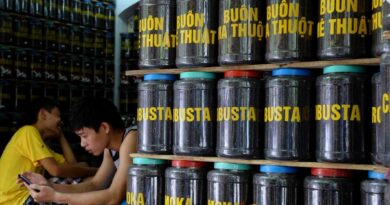 What you need to know about the coronavirus right now