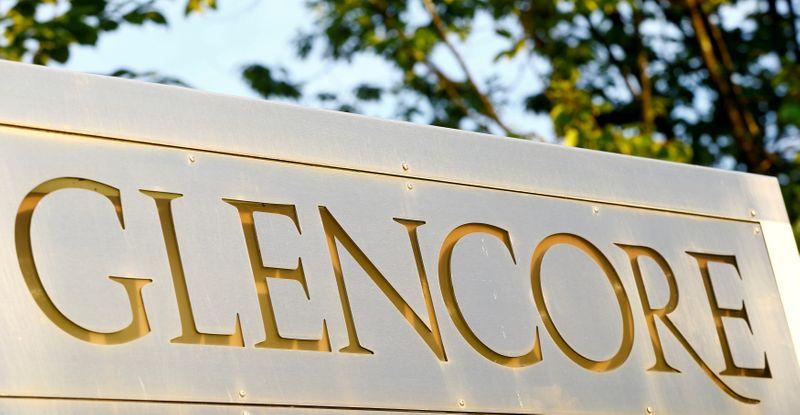 JOHANNESBURG/LONDON (Reuters) – Glencore reinstated its dividend and flagged possible further payouts on the back of strong commodity prices as billionaire Chief Executive Ivan Glasenberg prepares to hand over the reins of the trading and mining giant.

FILE PHOTO: The logo of commodities trader Glencore is pictured in front of the company’s headquarters in Baar, Switzerland, July 18, 2017. REUTERS/Arnd Wiegmann/File Photo

Having scrapped its dividend in August after a pandemic-driven first-half loss, Glencore recommended a distribution of $0.12 per share for 2021, representing a bigger than expected total payout of $1.6 billion.

Shares in the company jumped 2.8% to 291 pence by 0950 GMT, making it the biggest gainer in an index of its peers in London.

Though much smaller than the $2.6 billion announced last year before the dividend was cancelled, the payout exceeds consensus market expectations of $1.3 billion and echoed the bumper dividend at mining giant BHP Group.

Glencore, one of the world’s biggest commodity traders, could top up the dividend or launch a share buyback after it cuts net debt below $13 billion and if commodity prices stay strong, finance chief Steve Kamlin said after the company reported 2020 results.

“It does provide potential capacity, come August or certainly the end of the year, for us to start thinking about a top-up distribution or buyback,” he told reporters.

Glencore’s trading business benefited from strong metals markets, particularly copper, nickel and zinc. It was also boosted by the storing of oil when crude prices plunged early last year, selling it later at higher prices and profiting from what is known as a contango market structure.

“Navigating from recessionary conditions in the first half to a strong price recovery for most commodities in the second, adjusted EBITDA finished the year flat at $11.6 billion,” said CEO Glasenberg, who is leaving Glencore and will be handing over to Gary Nagle in the first half of this year.

The trading division had its best year since 2008, buoyed by extreme volatility in the oil market because of coronavirus lockdowns and a challenging cobalt market.

Net debt fell to $15.8 billion in 2020 from $17.6 billion in 2019, helped by strong second-half cash flows. This was within its target range and beat market expectations.

“The balance sheet is in a stronger position now,” said Glasenberg, adding that the miner aims to lower net debt further this year.

Glencore’s net debt is the largest among its peers, partly because of its trading business.

The group booked a mainly non-cash impairment charge of $5.9 billion largely against its Mopani mine in Zambia and Colombian coal and African oil assets, widening its net loss of $1.6 billion from $404 million the previous year.

In coal, Glencore continued to divert its output from Australia to other markets owing to a trade dispute between Australia and China, Glasenberg said.

He ruled out buying BHP’s Mount Arthur thermal coal mine in Australia but said it could look to swap some coal assets without compromising the miner’s production cap of 150 million tonnes a year.