After falling as much as 0.9% in morning trade, the pan-European STOXX 600 index ended largely unchanged around 467.57 points. The index had shed 1.5% over the past two days on fears of a more-hawkish-than-expected ECB.

“We’re seeing some modest weakness mainly because the market is just in flux. There is no real clarity on when we will start to see the Fed and ECB start to pull back stimulus,” said Edward Moya, a senior market analyst with OANDA in New York.

“Wall Street is still bullish. You’re going to have a slow Fed as far as tapering and interest rate hikes. We will see a tremendous amount of accommodation to pump up this economy.”

The euro rose 0.13% against the dollar, its first gain in four sessions, while French 10-year yields turned negative.

Longer-dated U.S. Treasury yields fell after a strong auction for 30-year bonds closed out $120 billion in coupon-bearing supply this week.

Germany’s 10-year yield, the benchmark for the bloc, fell.

The UK’s FTSE 100 dropped 1% with low-cost airline easyJet tumbling over 10% as it tapped shareholders for 1.2 billion pounds ($1.7 billion).

MSCI’s broadest index of Asia-Pacific shares ended down 1%, in its worst daily performance since Aug. 19 when markets worried about the Fed tapering its massive asset purchase programme.

Chinese tech giants Tencent Holdings Inc, NetEase Inc and Alibaba Group Holding Ltd had slumped 8.5%, 11% and 6% respectively after online gaming chiefs were summoned by authorities to check they were sticking to strict new rules for the sector.

“The global story is looking soft and it’s being hit by the Delta variant plus concern about potentially the Fed still moving towards a taper,” said Rob Carnell, Asia head of research at ING. “It’s an unsettling combination of things.”

Stocks in Hong Kong, where many heavyweight Chinese firms are also listed, shed 2.3%.

News that Chinese authorities had told gaming firms to stop focusing “only on money” and “only on traffic” had hurt companies with large gaming operations. Tencent fell 8.5%, Bilibili lost nearly 9% and NetEase slumped 11%.

Evergrande, the country’s most indebted property giant, was hit with more turbulence.

Media reports the company would suspend some loan interest payments and payments to its wealth management products sent its shares down more than 10% at one point, although they recovered almost half of the drop on news that some creditors had agreed to loan payment extensions.

Australian stocks lost nearly 2% after payrolls data showed a sharp drop in jobs in the first half of August. 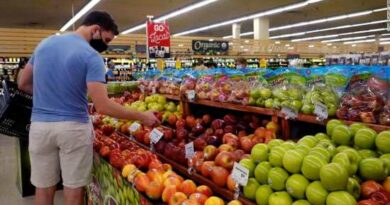 Mark Carney: Inflation is a positive sign of economic progress

Carry Trades Are Back in Focus, Especially for Indonesia’s Rupiah