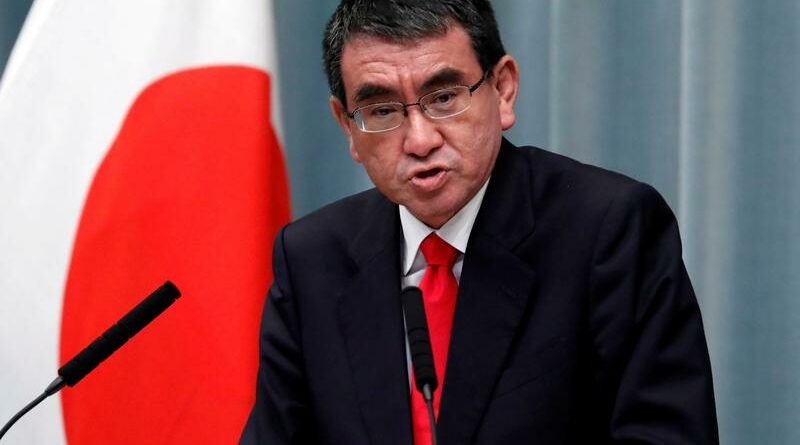 TOKYO (Reuters) -Japan’s popular coronavirus vaccination minister, Taro Kono, is expected to officially announce his candidacy on Friday to lead the ruling party and, by extension, become the next prime minister.

Kono becomes the third candidate to throw his hat in the ring for the leadership of the Liberal Democratic Party (LDP), which opened up last week when Prime Minister Yoshihide Suga said he would step down.

Kono appears to have an edge over former foreign minister Fumio Kishida and former internal affairs minister Sanae Takaichi in the race.

Nearly a third of respondents in a poll by major domestic media last week said the Georgetown University-educated Kono, 58, was the most suitable to succeed Suga.

Kono had informed Suga of his intention to run, local media reported, several hours before a news conference at which he is set to make a formal announcement.

Previously known as a strong critic of nuclear energy, Kono sounded a more cautious tone in a two-page policy brief handed out to reporters gathered to hear him declare his candidacy.

“We will carry out a realistic energy policy which will be reassuring for industry,” said the paper, which also highlighted the importance of promoting digitalisation and green technologies.

Kono promised to strengthen the country’s deterrence against “unilateral attempts to shift the status quo” as Japanese officials have warned Beijing against its assertiveness in the East and South China Seas.

The winner of the Sept. 29 vote of grass-roots LDP members and its lawmakers is virtually assured the premiership because the LDP has a majority in parliament’s lower house, which must hold an election by Nov. 28.

Lawmakers are counting on the new leader to boost the party’s support after Suga’s ratings hit record lows.

While Suga’s support was undermined by his haphazard handling of the coronavirus pandemic, Kono, who has been in charge of a rocky vaccination rollout, has remained popular, particularly among younger voters.

That is partly thanks to his ability to reach out to the public through Twitter, where he has 2.3 million followers – a rarity in heavily scripted Japanese politics dominated by older men less adept with social media.

In the policy paper, Kono vowed to continue the fight against the coronavirus by acquiring COVID-19 booster shots for Japan.

Some in the LDP feel Kono is too young, given the average age of prime ministers taking office since 2000 was about 62. Their concerns include his lone-wolf style in a system that runs on consensus, and an outspoken streak that can occasionally see him challenge the party line.

Despite that reputation, Kono toed the line on Abe’s key policies when he served as both defence and foreign ministers in his cabinets.

He has differentiated his conservative stances from those of his father, former chief cabinet secretary Yohei Kono, who authored a landmark 1993 apology to “comfort women”, a euphemism for women forced to work in Japan’s wartime military brothels.

Kishida is reasonably popular and can count on the support of his faction of the party, while Takaichi, hoping to become Japan’s first woman prime minister, has support on the party’s conservative flank, including that of influential former prime minister Shinzo Abe.

One remaining question is whether former defence minister Shigeru Ishiba, who is also well-liked among party members, will run on his own or back Kono.

Why Amazon.com Stock Dropped 6% on Monday

Ben Carson defends Trump amid feud with House Dems: 'He's not a racist'