The new COVID-19 aid will provide a bigger boost to the U.S. economy than initially expected, according to Goldman Sachs.

“The biggest difference relative to our prior assumption is the inclusion of stimulus checks, which now imply a large increase in disposable income” in the first quarter followed by a sequential decline in the second and third quarters, wrote a Goldman Sachs research team led by chief economist Jan Hatzius.

The aid package includes a $600 direct payment to most Americans, an additional $300 per week in unemployment benefits through March, Paycheck Protection Program loans for small businesses and other provisions.

A $2,000 direct payment, which has President Trump’s support and already passed through the House of Representatives, could soon be voted on in the Senate.

Goldman says the increased payment would “significantly” boost disposable income in the first quarter to levels above that of the second quarter of this year when the $1,200 stimulus checks were distributed. The firm did not provide a forecast in the event the $2,000 payment was passed.

While Goldman’s forecast is well above the Wall Street consensus of 2.5%, it still would make for a sharp slowdown from the current pace of growth.

The Federal Reserve Bank of Atlanta’s GDPNow model, which tracks real GDP based on available economic data for the current quarter says the U.S. economy is tracking 10.4% growth for the final quarter of 2020. An updated model will be released on Jan. 4.

That follows the record 33.4% growth experienced in the third quarter after governments eased lockdowns aimed at slowing the spread of COVID-19. Those lockdowns caused the economy to contract by a record 32.9% annualized pace during the April through June period. 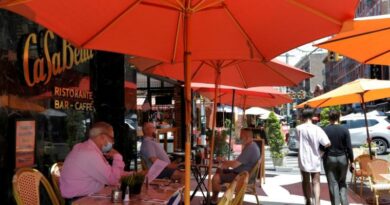