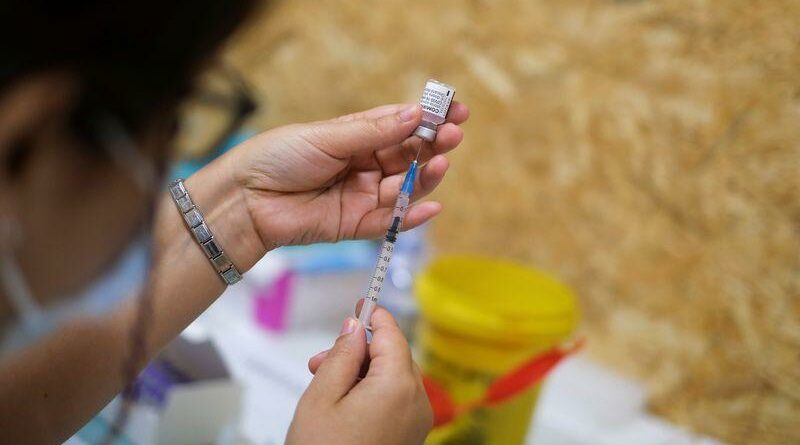 LISBON (Reuters) – Portugal has fully inoculated 80% of its population against the coronavirus, official data showed, becoming one of the world’s most vaccinated nations as authorities gradually drop most COVID-19 restrictions.

According to a Reuters tracker, Portugal and the United Arab Emirates have the same rate of complete vaccinations, jointly leading the world.

The southern European nation, which at the start of this year battled what was then the world’s worst coronavirus surge, has vaccinated around 8.2 million people out of its population of just over 10 million, health authority DGS said late on Tuesday.

Almost all adults over 65 and half of young people aged 12-17 have now been fully vaccinated, DGS said. Everyone above the age of 12 is eligible to receive the vaccine in Portugal.

“I’m not concerned if we are (the world’s) number 1, 2 or 3,” the head of Portugal’s vaccination task force, Vice-Admiral Henrique de Gouveia e Melo, said after a visit to a vaccination centre near Lisbon over the weekend.

“What I want is to control the virus, to vaccinate as many eligible people as possible so the virus doesn’t have room for manoeuvre,” he said outside the centre, where he was applauded as he walked around.

Gouveia e Melo has been widely praised for setting up a speedy vaccination campaign, which has allowed Portugal to lift most of its coronavirus restrictions.

He said the country started to inoculate at the same pace as other European Union nations but as anti-vaccination movements grew elsewhere, Portugal, where only around 3% of the population consider themselves vaccine “deniers”, sped up the rollout.

He warned, however, that the battle against COVID-19 was not over until all countries, rich and poor, can access vaccines.

“We are over-vaccinating in richer countries and then there is zero vaccination in poorer countries,” he said. “I can’t agree with that – not only due to ethics and morals but because it’s not the best strategy and rational attitude.”