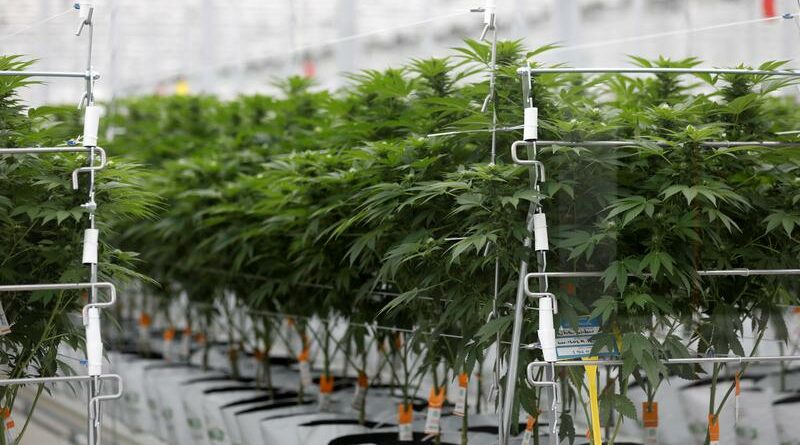 (Reuters) – Shares of red-hot cannabis firms plunged by more than one-third on Thursday, marking another short-lived squeeze of short sellers by retail investors aiming to benefit from an expected push to decriminalize marijuana under U.S. President Joe Biden.

Despite gains in premarket trading as European retail investors piled in to the rally, U.S.-listed shares of Tilray Inc and Aphria Inc, the two biggest holdings in the ETFMG Alternative Harvest ETF, closed down 49.7% and 35.8%, respectively. Tilray had soared more than 148% while Aphria has surged nearly 58% this week through Wednesday’s close.

Shares of Sundial Growers, up 46% through Wednesday, also turned lower to end with a 19% loss.

“With cannabis stocks you have the new administration and the potential for legislation, a real fundamental item … to the extent that if there is a big change in some of those laws, it would be very favorable for those companies,” said Tom Martin, senior portfolio manager at Globalt Investments in Atlanta.

Participants on the WallStreetBets forum on Reddit, which inspired a price spike in GameStop Corp earlier this year that squeezed out Wall Street short-sellers who had bet on a price fall, had turned attention to U.S. and Canadian cannabis firms.

“I’m splitting the outlook in two. Reddit targeting a short-squeeze in Tilray means a quick pump and dump,” said Jasper Lawler, head of research at London Capital Group in London, while others looked longer-term at benefits from potential legislative changes under Biden and his Democratic allies in Congress.

U.S. Vice President Kamala Harris said in the presidential campaign marijuana would be decriminalised at a federal level in the United States under a Biden administration.

“Even with the short burst of interest in these names this week, Tilray and MJ were still far off their record highs in late 2018 when Canada legalized adult-use marijuana,” said Jessica Rabe, co-founder at DataTrek Research in New York, in response to email enquiries.

“It’s also important to remember that Canadian cannabis stocks listed on US exchanges can’t currently have operations in the US since the drug is federally illegal here. That means they won’t directly benefit from US reforms until it is declassified as a Schedule I drug,” she wrote.

Even so, the political shift in the United States has unlocked an estimated $1.38 billion jackpot for struggling pot producers, who issued stock during the first five weeks of the year, according to investment firm Viridian Capital Advisors.

Canadian pot companies have been the largest beneficiaries of the rally in shares, owing to the fact they have been allowed to list on U.S. exchanges.

SwaggyStocks, which aggregates sentiment on shares discussed on WallStreetBets which has about 8 million participants, showed Sundial and Tilray were the most highly touted stocks.

According to research firm S3 Partners, short interest in the nearly 200 cannabis stocks in the United States and Canada is $4.95 billion and is highly concentrated in a few names, with “short interest of the top twenty most shorted stocks in the sector at $4.86 billion.”

Short interest in Tilray, measuring the number of shares borrowed by short sellers betting on a price fall, was about 37% on Wednesday compared with 27% at the end of January, financial analytics firm Ortex said.

S3 noted that while Canopy Growth was the largest short in the sector, Tilray “has closed the gap significantly.”

Short-sellers borrow stocks and sell them on, aiming to buy them back later more cheaply and pocket the difference. If the shares move up instead, they face a “short squeeze” as they race to buy the stock to close out their positions to stem losses.

Along with Tilray and Sundial, other pot stocks such as Aurora Cannabis were among the most actively traded in the United States.

The recent surge of activity in stocks spurred by social media has caught the attention of the U.S. Securities and Exchange Commission, which announced on Thursday it has suspended trading in “an inactive company amid questions surrounding online promotion of the company’s securities and recent trading activity.”

The order, for the over-the-counter traded SpectraScience, notes there may be a coordinated attempt by certain social media accounts to artificially influence the stock price.

Customers on eToro, a retail trading platform seen as an alternative in Europe to popular U.S. platforms such as Robinhood, opened more positions in Tilray on Wednesday than in the first 10 months of 2020 combined.

One eToro user in Germany, @ChrisBro14, wrote in a thread about Tilray as it traded around $70: “Guess will go to $100. Where do you have TP limit. What do you think it will (do)?”

Interest in the sector lifted cannabis-focused exchange traded funds (ETFs) to new highs, with some more than doubling in value over the past month.

$800 million in disaster aid to farmers hit by hurricanes