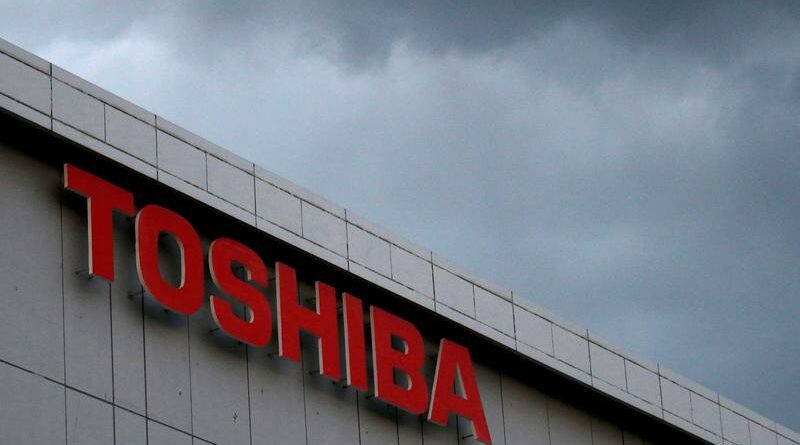 FILE PHOTO: The logo of Toshiba Corp. is seen at the company’s facility in Kawasaki, Japan February 13, 2017. REUTERS/Issei Kato/File Photo

The comments by 3D Investment Partners, which owns a 7.2% stake in Toshiba, come as a $21 billion buyout offer from CVC Capital Partners earlier this month has sparked expectations for a bidding war for the Japanese company.

While Toshiba dismissed that offer citing a lack of details, CVC has not thrown in the towel and sources have said some other private equity investors are also considering making bids.

“We call upon the board to openly welcome interest from suitors who could enhance corporate value and ask the board to conduct a formal review of strategic alternatives,” 3D said in a letter sent to Toshiba’s board on Monday and made public.

“To conduct a fair and proper process, Toshiba should explicitly indicate that it is open to alternative ownership structures and correct media speculation that Toshiba’s management team and board have a strong preference for remaining a listed company,” 3D said.

The industrial conglomerate has said it believed that being publicly traded provided a “capital structure suitable for enhancing long term value creation” but added that its board would not disregard various proposals, including those to take the company private.

In response to a request for comment on 3D’s letter, Toshiba reiterated that stance on Monday.

“This letter may be the starting point of multi-party dialogue … other shareholders certainly feel the same way, and addressing the board publicly puts them on the spot,” Quiddity Advisors analyst Travis Lundy, who writes on Smartkarma, told Reuters.

“I expect more shareholders will come forward with similar letters”

Earlier this month, U.S. hedge fund Farallon Capital Management, Toshiba’s third-largest shareholder with a stake of around 6%, also called on the Japanese conglomerate to seek other offers from potential suitors.

Singapore-based Effissimo Capital Management, Toshiba’s top shareholder with a stake of around 10%, has not commented since CVC’s offer was made public.

A senior executive at one of Toshiba’s main lenders said that several private equity funds have contacted his bank for potential financing, but no talks are in progress.

In the letter, Singapore-based 3D suggested it would take further action if the Toshiba board fails to consider its request, saying shareholders “will have no choice but to seek a more significant and ongoing role in governance”.

“Shareholders will hold management accountable if they try to block these interests to buy the company,” said another Toshiba investor, who could not be named because of confidentiality constraints.

Four finalists vie for Time's Person of the Year for 2020