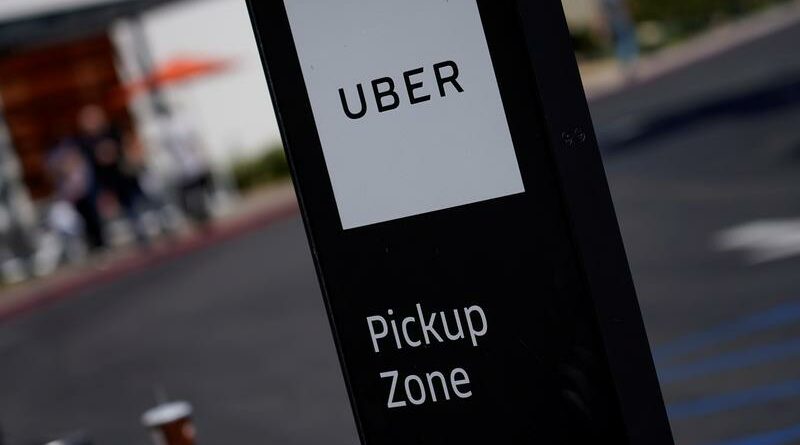 NEW YORK (Reuters) – Uber Technologies Inc on Wednesday said revenue at its ride-hail and delivery businesses increased on a quarterly basis and said it was well on track to achieve its target for an adjusted profit by year-end.

Shares fell 2.4% in after-hours trading after gaining around 6% during the day in reaction to smaller ride-hail rival Lyft Inc saying on Tuesday it might become profitable during the third quarter, three months ahead of a previous goal.

Uber reported a loss on an adjusted basis before interest, taxes, depreciation and amortization of $454 million, significantly narrower than analysts’ average expectations for a $514 million loss, according to Refinitiv data.

Adjusted EBITDA, which excludes the cost of the company’s extensive stock-based compensation and other potentially significant items, is the profitability metric Uber uses.

Uber reported $3.17 billion in total revenue in the months from October through December.

Fourth-quarter mobility revenue, largely comprised of rides, declined by 52% from last year, but at $1.47 billion was up 8% on a quarterly basis despite new lockdown measures in the United States, Europe and the Middle East.

Lyft on Tuesday said it expected a rebound in demand in the second quarter and, in combination with further cost cuts, said it might now be able to turn a profit in the third quarter.

Orders at Uber’s food delivery platform, Uber Eats, further grew during the fourth quarter, as many countries and U.S. states issued new lockdown orders, closing restaurants and prompting many people to order in.

Delivery revenue more than tripled from last year and at around $1.36 billion, grew 19% compared with the third quarter.

Uber has expanded its footprint in the competitive space and acquired smaller food-delivery rival Postmates for $2.65 billion and alcoholic beverage delivery service Drizly for $1.1 billion.

Both deals were largely stock-based, with the Drizly deal expected to close later this year.

Uber also said it had further lowered costs in the fourth quarter, with total costs and expenses dropping 14% in that period.

The company in December sold its self-driving Advanced Technologies Group (ATG) in a $4 billion equity deal at a steep drop in valuation. Khosrowshahi at the time said the deal would accelerate Uber’s profitability goal.

The same month, Uber also handed over the keys to its air taxi business Elevate, another cash-burning unit, without disclosing the terms of the deal.