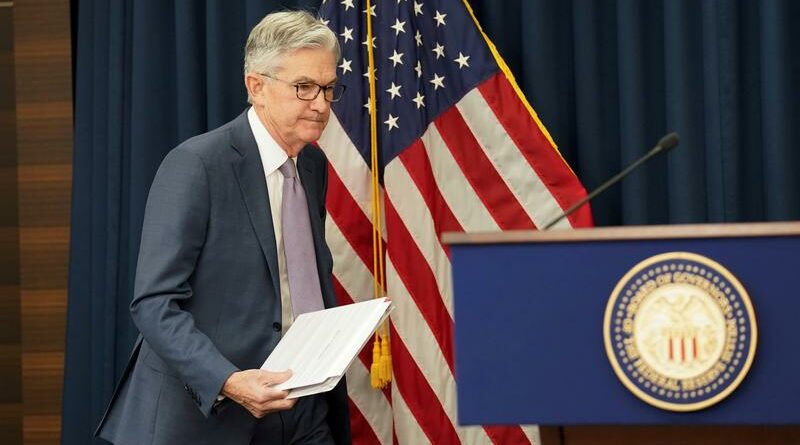 WASHINGTON (Reuters) – Invoking post-World War II efforts to reach full employment and pledging continued loose monetary policy to help the process, Federal Reserve Chair Jerome Powell made a broad call Wednesday for a “society-wide commitment” to get Americans back to work, particularly minorities and those ousted from lower-paying jobs during the pandemic.

FILE PHOTO: U.S. Federal Reserve Chairman Jerome Powell arrives to speak to reporters after the Federal Reserve cut interest rates in an emergency move designed to shield the world’s largest economy from the impact of the coronavirus, during a news conference in Washington, U.S., March 3, 2020. REUTERS/Kevin Lamarque

“Given the number of people who have lost their jobs and the likelihood that some will struggle to find work in the post-pandemic economy, achieving and sustaining maximum employment will require more than supportive monetary policy,” Powell said in remarks to the Economic Club of New York. “It will require a society-wide commitment, with contributions from across government and the private sector.”

“Fully realizing the benefits of a strong labor market will take continued support from both near-term policy and longer-run investments so that all those seeking jobs have the skills and opportunities that will enable them to contribute to, and share in, the benefits of prosperity,” Powell said.

While the Fed has already promised that borrowing costs for companies and households will be kept low as the economy recovers, Powell’s remarks spoke to the need for a more comprehensive approach to end the jobs crisis that followed the onset of the coronavirus last spring. In scope and approach, including a call for long-term investment, the remarks aligned closely with the sort of proposals being discussed by President Joe Biden and his Treasury Secretary and former Fed chair Janet Yellen.

The United States remains about 9 million jobs short of where it was a year ago, and the recovery has been most sluggish for members of minority groups and those thrown out of lower- paying jobs because of the pandemic.

Biden is urging Congress to pass a $1.9 trillion emergency spending bill, and is planning a longer-term infrastructure effort that some analysts expect will also involve trillions of dollars in additional federal spending.

Though the Fed has no direct say over how the federal government spends money or how much it raises, central bank policy does influence the interest rate the government pays and thus the cost particularly of longer-term investments.

During the pandemic, Fed policymakers have generally set concerns about the level of federal debt to the side and focused more on the economy’s immediate needs.

Powell on Wednesday cemented that stance, noting that after World War II, as the economy transitioned from wartime and needed to absorb millions of returning soldiers into the labor force, the Employment Act of 1946 committed the government “to use all practicable means” to see that anyone willing and able to work can find “useful employment.”

“At present, we are a long way from such a labor market,” he said.